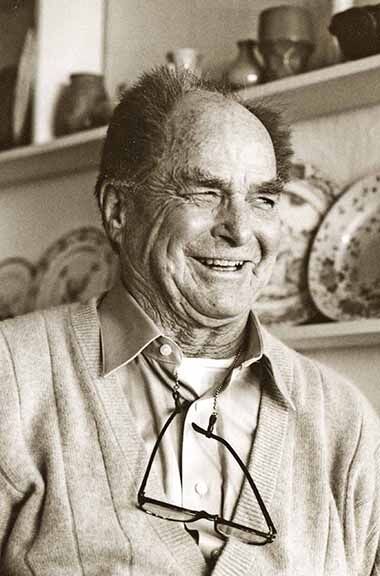 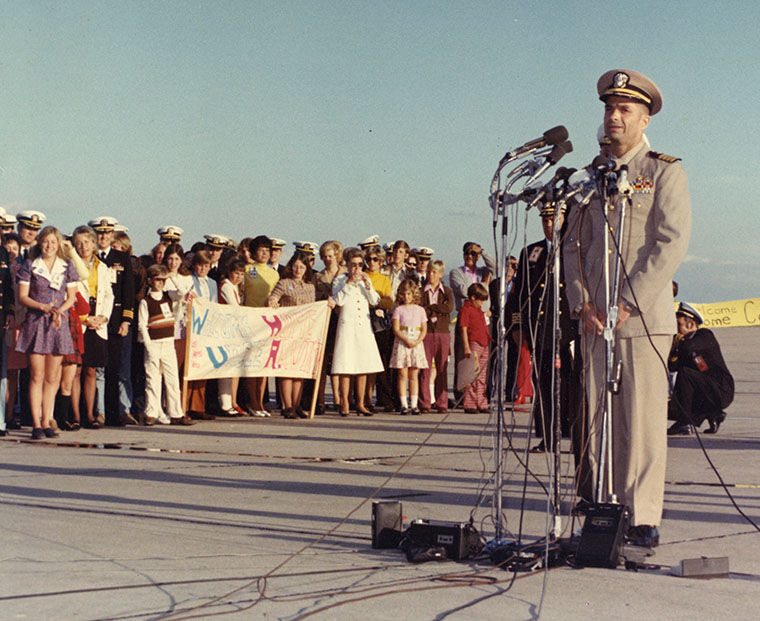 This color photograph of Mel Moore at the microphones was taken at Miramar. In the background are the families and friends of the other returning POWs on the plane. The other POWs couldn’t de-plane until Moore stopped talking - so he made it short, thanked everyone and then said “excuse me so that I can go to my lovely wife.” Daughter Michelle is in the crowd, blue dress, white collar, clapping, age 16. Moore passed away recently.

This color photograph of Mel Moore at the microphones was taken at Miramar. In the background are the families and friends of the other returning POWs on the plane. The other POWs couldn’t de-plane until Moore stopped talking - so he made it short, thanked everyone and then said “excuse me so that I can go to my lovely wife.” Daughter Michelle is in the crowd, blue dress, white collar, clapping, age 16. Moore passed away recently.

“Mel” served his country proudly in Korea and Vietnam as a pilot in the U.S. Navy. In 1967, at the age of 38, Captain Mel Moore was shot down over Vietnam in his A-4E Skyhawk. He spent 2,185 days as a POW at the notorious Hanoi Hilton -- 312 weeks -- one week shy of six years. He served with other POWs who would call Coronado home, men like Jim Stockdale, John McCain, Harry Jenkins and Ed Martin.

As a prisoner, he suffered extreme torture at the hands of his captives. And yet, he not only survived, but found a way to help those around him despite great personal risk. Mel Moore died this week at the age of 91, in Coronado, with his wife Chloe beside him.

The oldest of two boys, Mel was born June 2, 1929. He lived in the Bay area, Oakland and Berkeley, most of his youth. His parents were Lydia Burr (Robbins) and Ernest Melvin Moore Sr. She was a couture seamstress and he was a banker. Mel’s family dates back to the first European colonists in America. Other ancestors came to the United States in the early 19th century from Ireland. His family has served in the Revolutionary War, War of 1812, Civil War, World War II, and the Vietnam Conflict.

From an early age, Mel desired to fly. He was commissioned as an Ensign in May 1952 and served in carrier squadrons in both Korea and Vietnam. He was executive officer of his squadron on the USS Ticonderoga during the latter.

On March 11, 1967, Mel was 38 years old. He was married, with three young daughters. On that day, Mel was flying a seek and destroy mission designed to take out fixed and mobile missile launchers in North Vietnam, a notorious area known as the Iron Triangle. He was literally using his airplane as bait to lure ground fire from the North Vietnamese away from his strike group. Despite evading eight surface-to-air missiles directed at his aircraft, he managed to neutralize two separate missile sites threatening the strike group, which earned him the Silver Star.

Mel had his finger on the trigger, needing just a moment longer to take out his target. “All of a sudden my plane exploded. Instantly, my aircraft was a sieve. All my gasoline streamed out within a minute. I ejected.”

He separated from his seat and his parachute slowly began to drop into a flooded rice paddy below. He could see people running towards his parachute. Once on the ground, he surrendered to a 17-year-old peasant girl with a handheld sickle.

Mel was blindfolded, stripped to his underwear and force-marched barefooted for four hours through the rough terrain. He ended up at what became known as “the Hanoi Hilton,” a former French prison built to house Vietnamese.

Through extreme torture, his captors broke him again and again, said Mel. “No words can describe that torture, or the pain we endured or succumbed to. They forced us to talk, to write. Torture was designed to break us.”

Mel said resistance was a learned conduct to save honor. But when they applied torture and pain, nobody got away with just name, rank, service number and date of birth. “Nobody did get away with it, much as we tried. All of us were broken in one sense or another. You resist, then you give them something. Then, to salvage yourself, you go back to resistance mode. I was in solitary confinement for two years.”

How Mel dealt with solitary is another story altogether. “It has never, ever bothered me to be alone. Even in Vietnam, solitary confinement was not the punishment the Vietnamese thought it would be, to make me change. I had just gotten out of the Baccalaureate program in Monterrey, and in solitary I forced my mind to rethink every one of those courses. I literally rehashed all the schooling I had while I was in solitary.”

Mel refused to allow hatred to influence his attitude. While a lot of other pilots harbored extreme anger and hate for their captors, Mel, made a conscious decision that hatred served no purpose.

Mel went on to describe the conditions and climate during captivity. “The leaders of our American prisoners had already been thrown into the Hanoi Hilton when I arrived in March of 1967. When I was finally moved in with other people, they were all there, some who would live out their days in Coronado.” Those men he referred to, men he bonded in captivity with, included Jim Stockdale, John McCain, Harry Jenkins, Ed Martin, and others.

Pilots share a certain esprit de corps, as they have since man first took to the air – a feeling of pride and fellowship. In captivity this fellowship was enhanced. They were a well-schooled, highly intelligent lot, and did their best to take care of their own. If they could only come home with one thing other than their lives, it was their honor.

Captain Moore was released with the second wave of POWs on March 4, 1973. He gave up alcohol. “I stopped drinking in 1987,” he said proudly. He believed strongly that education made all the difference in the world at how you looked at things and reacted to them. Mel served as CO of the attack transport USS Paul Revere and then as CO of the amphibious assault ship USS New Orleans until his retirement from the Navy Dec. 31, 1978.

Mel Moore is survived by his wife Claudette “Chloe” Moore and three children, Michelle Moore (Alan Ogden) of Napa, California; Melissa Moore of San Diego; and Leslie (Robert) Phillips, also of San Diego. He is also survived by six grandchildren and one great-grandson.

In lieu of flowers, the family asks that donations be made “In Memory of Mel Moore,” to the Coronado Community Church, 639 H Ave, Coronado, CA 92118.