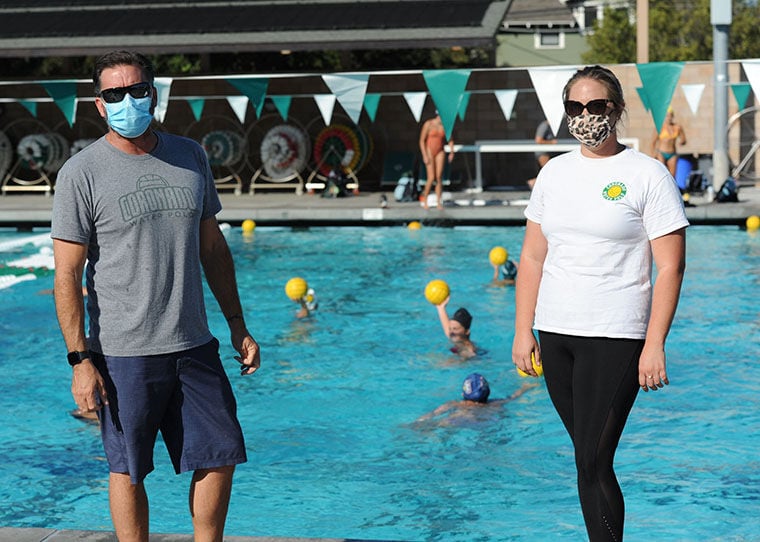 Coach Dave Throop, along with Assistant Coach and CHS ’14 graduate Jaicey Tyler, are heading the girls’ water polo team, and are hopeful for a competition season in December. 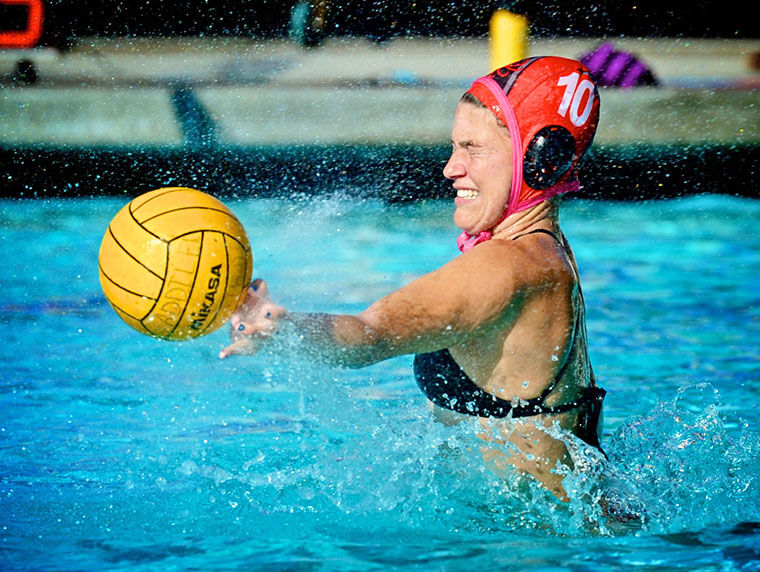 Senior Ella Farley, one of strong group of goalies on the girls’ water polo team, stops a shot on goal during a recent practice at the BBMAC.

Coach Dave Throop, along with Assistant Coach and CHS ’14 graduate Jaicey Tyler, are heading the girls’ water polo team, and are hopeful for a competition season in December.

Senior Ella Farley, one of strong group of goalies on the girls’ water polo team, stops a shot on goal during a recent practice at the BBMAC.

With the current state of CIF sports in flux, we know that nothing is certain about the pending combined fall and winter seasons.

One thing that is certain is that, in California, water polo is pretty much a year-round sport. In pre-COVID times, the boys would be competing in the fall, with intense two-a-day practices, along with early morning weight workouts. The girls would be participating as a club team, under the auspices of the Coronado Aquatics Club, with a slightly lighter training and scrimmage schedule.

As with almost all other aspects of our lives, COVID has thrown quite a wrench into the local sports scene, which in turn demands a lot of flexibility and creativity from players, coaches, fans and parents. Currently both girls and boys teams are practicing as club teams, with both also scheduled, if the current plan holds, to begin full-contact competition play in mid December.

At present, under the leadership of longtime local and experienced head coach Dave Throop, the girls are adapting to the no-contact drills, which emphasize individual skills, conditioning, and positioning. This presents some unique challenges to the coaching staff, which is rounded out by Jaicey Tyler (CHS 14), who was a formidable attacker during her four years as a varsity player, under the guidance of Throop himself. Normally during a practice or a game, the coach is on the pool deck, guiding the players through the drills or calling out plays during competition. Between periods or during time outs, coaches often demonstrate positioning in a hands-on fashion, demonstrating offensive and evasive defense moves. Man-up, or six-on-five situations, for example, require a lot of one-on-one contact, and are especially difficult to coach and practice in a distanced way, but Throop and Tyler are resourceful coaches, the players are eager to learn, and so they trust that, just like everything else that has come with 2020, they will adapt and find a way. With the no-contact rule, hands-on positioning is verboten, so the coaching staff has resorted to using shadow offense and defense strategies, combined with Zoom meetings, chalk talk, and watching videos of high-level collegiate teams to learn those important maneuvers.

The girls are working in two cohorts of 12 players, which are further broken down into four per lane, or per drilling area in the pool. The athletes work on individual shooting, passing drills, as well as endurance and swimming times. Water polo is a physically demanding sport, and endurance goes hand in hand with shooting, defensive moves, and situational game awareness. Each quarter is 7 minutes long, and though that might seem like a short period of time compared to other sports, there is no break, and each girl is either swimming, treading water, or doing one or the other of those things in combination with ball handling and wrestling with a competitor.

Throop notes that training for situations virtually or in shadow drills with the test of competition presents its own challenges, also says that “mental health and physical health are still the most important aspects of the sport, even before competition,” so they continue to work toward competition season with hopeful preparation.

Junior Sarah Olson echoes that sentiment, and said, “We are working hard on basic fundamentals like shooting and better body position so that when season comes, we are ready to beat some teams.” Senior Ella Farley, who is one of a strong coalition of goalies, adds, “I think I speak for the whole team when I say we are really grateful to have had the opportunity to be together in the pool, practicing on a regular basis since August, and look forward to playing games again soon. As a senior, I’m excited to be able to even have a senior season of water polo with my team, and finish my four years as an Islander.”

The coaching staff and players are at the mercy of COVID, and the CIF at State, Regional, and finally the sectional levels, and expect to learn more about what the potential season may look like sometime after Thanksgiving.