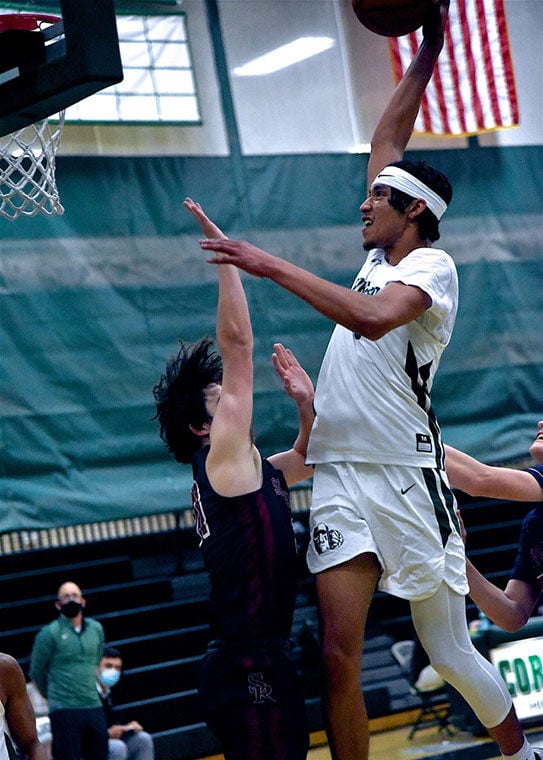 Coronado Islander forward Alex Crawford, top right, takes it in for a slam dunk over a Scripps Ranch player during their game Tuesday, March 23, 2021 in Coronado. The Islanders went on to win 72-61. 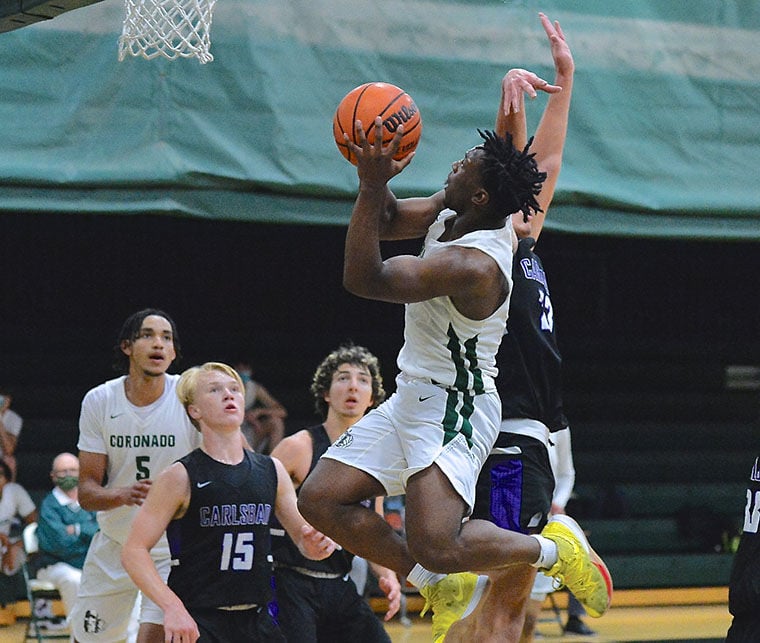 Islander point guard Wayne McKinney, No. 3 goes up for a shot in a Tuesday (March 30) night game vs. Carlsbad. A late rally by Carlsbad High School resulted in a 55-58 loss for the Islanders.

Coronado Islander forward Alex Crawford, top right, takes it in for a slam dunk over a Scripps Ranch player during their game Tuesday, March 23, 2021 in Coronado. The Islanders went on to win 72-61.

Islander point guard Wayne McKinney, No. 3 goes up for a shot in a Tuesday (March 30) night game vs. Carlsbad. A late rally by Carlsbad High School resulted in a 55-58 loss for the Islanders.

For those of you who may be unfamiliar with the 2021 Coronado Islanders men’s basketball, I urge you to pay attention. This year’s team, when it’s all said and done, may rank as one of the finest in school history, and on Tuesday, March 23, in their game versus Scripps Ranch, they gave us a glimpse as to us why. Coming into last week’s matchup, the San Diego Union-Tribune listed the Islanders as one of San Diego County’s “Teams to Watch,” thanks in large part to the team’s depth and their 1-2 punch of seniors Alex Crawford and Wayne McKinney.

Despite the dominant opening for the Islanders, the second quarter of play would have a much different feel. Despite being down, and frankly dominated early, Scripps ranch would not go away as they would catch fire from 3 point land, going four/fifths to start the quarter and quickly erase a once 12 point lead held by the Islanders. Along with the hot shooting from Scripps Ranch, the Islanders would go on a 4-minute stretch that saw them fail to score a bucket. However, the scoring drought would finally end when a driving McKinney lay-up would fall, ending what a 10-0 by Scripps was. Scripps Ranch would again hit a 3, giving them their first lead of the game. However, right before the half, the Islanders would draw within two points, thanks to a vicious two-handed slam by Crawford. But still, Coronado would trail 32-30 at the half.

However, whatever the halftime message from head coach JD Laaperi was, it resonated as the Islanders looked more like their dominant selves. Coronado quickly jumped back into the lead thanks to McKinney’s playmaking and shooting, scoring the team’s first 10 points on the quarter on his own—going four/fifths from the field.

The defense for the Islanders picked up as well, thanks to solid play in the low post from Crawford and Junior Kieran Ashley, who both picked up blocks in back-to-back defensive possessions. But just when it looked like Coronado was pulling away, Scripps Ranch yet again hit a barrage of 3 pointers to claw their way back and make it a 44-43 game with 1:43 left in the third quarter. But McKinney came to the rescue yet again as he dropped five more points in the last 1:30 to give the Islanders a 48-43 lead heading into the fourth.

The fourth quarter would be marked by two things, the Islander defense and Crawfords relentless play on the glass. With 6:31 left in the game, Coronado held onto a slim 55-52 lead. Still, things quickly moved in the Islander’s favor when they started feeding the 6’7” Crawford down low as he would account for the following 8 Islander points with assists coming from sophomore Nolan Reuter and Ashley. The scoring from Crawford would give the Islanders a 60-52 lead would 3:42 left. But again, the Falcons would not go quiet, as they would hit yet another 3-pointer to make it 60-55. Not to be done, Ashley would hit a massive 3-pointer of his own.

In the final minutes, the boys in green and white would turn up the defensive effort to the highest it had been all game, as they would hold the Falcons to just 5 points in the last 3 minutes. After a few free throws from McKinney to ice the game, the buzzer would sound, giving the Islanders the 72-61 victory and a 1-0 start to the year.

By the time this paper hits your door, the Islanders will have already played their second game against Carlsbad High School. For those looking for the next game, it will be Thursday, April 1, at home versus La Jolla Country Day at 6:30 p.m.