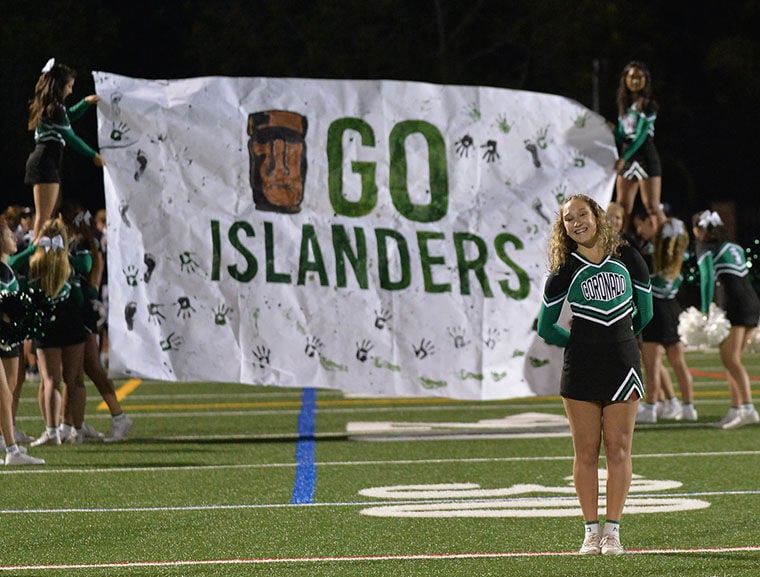 Senior Megan Westphal and the Islander Cheer squad prepare for the team to leap through the sign and back onto the field following half time during Friday’s game vs. Santana, Aug. 20. 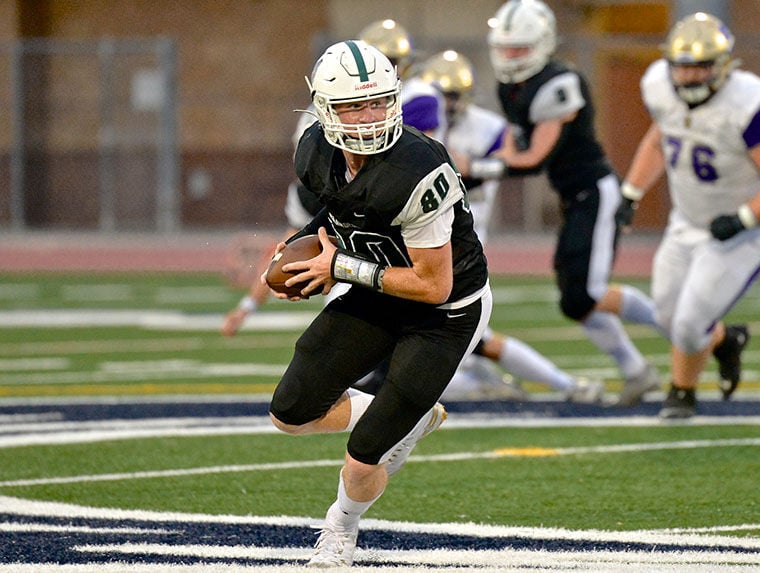 Senior Megan Westphal and the Islander Cheer squad prepare for the team to leap through the sign and back onto the field following half time during Friday’s game vs. Santana, Aug. 20.

With a sea of black worn by Islander fans and the excitement in the air before kickoff, there was no question that those who attended the Coronado Islanders’ football season opener this past Friday, Aug. 20 were treated to an absolute thriller.

For the first quarter of the season opener, the defense would be the story for both the Santana High Sultans and the Islanders. After allowing the Sultans to gain 30 yards on their first three plays from scrimmage, the Islanders’ front four quickly tightened up. With Santana on the Islander 42, JT Nelson and Donny Couts applied pressure on back-to-back plays, causing errant throws from Santana to force an eventual punt.

With the defense going strong, many were hoping to see the Islanders’ offense take off on their second drive. Things did start strong, with the Islanders picking up their first first down on runs from Zane Delcore and quarterback Hudson Herber. The Islanders kept the momentum going as Herber found Finley Alexander on a wheel route for a nice 12-yard pick-up and moved the ball onto the Sultans side of the field.

But the promising drive would quickly come to an end due to a pair of Islander penalties on first down and a back-breaking sack on third and 11, forcing the Islanders to punt and keeping the game tied at 0-0 at the end of the first quarter.

In the second, the story remains the same. On the Santana opening drive of the quarter, they picked up a quick 20 yards on a slip screen to the half-back setting them up at the Islander 49-yard line. But after that quick chunk of yards, the Coronado defense would yet again stonewall them.

On first down, Gunnar Tonkin came down from his corner position and blew up a play in the backfield. And not to be outdone by his teammate, Nelson sacked the Santana quarterback to set the Sultans in an unmanageable third and long, eventually leading to a punt.

The ensuing Islander drive would be the best of the night. A pair of hard counts from signal-caller Herber would pick up a first for the Islanders to get things started. On the ensuing play, Delcore broke off a massive 90-yard touchdown run, sending the Islander faithful into hysterics. But it was called back due to an illegal block in the back.

However, the Islander drive would be extended thanks to an unreal play from Herber. On a third and 13, he would channel his inner Johnny Manziel by eluding three would-be sackers, roll to his right and find an open Sean Kelley for a 37-yard gain. However, after the mind-blowing play, the Islanders’ drive stalled as they punted back to Santana with just a little over two minutes left in the half.

Despite being low on time the Sultans would quickly push themselves into Islander territory, only to be turned away before the half thanks to an interception by Logan Eastlick, one of his two interceptions on the night, keeping it 0-0 heading into the half.

In the third quarter, it would again be the defense, mainly the Islander defense backs, that would take center stage. In the third, Coronado only allowed four first downs while causing a turnover thanks to an interception from Hudson Bartell, generated three sacks, and only let the Sultans cross midfield once.

But while the defense continued to thrive, the offense still seemed unable to find its footing. They’d have moments, such as a 12-yard catch and run from Graham Bower, or a 15-yard run by Delcore; but were not able to snowball that momentum. And because of that the game remained tied 0-0 heading to the fourth.

However, at the start of the fourth, the Islander offense would finally put it all together. To start the drive Herber zipped a pass to Elias Valdivia for an 11 yard pick up. Then three plays later the Islanders got a pass interference call moving them to the Sultans 34-yard line. After a Delcore nine-yard rush the Islanders had a second and one from the 25. The perfect time for a shot play.

Herber would take the second down shotgun snap and float a ball to the back pylon, where Valdivia, who did a great job beating his man in one on one press coverage, would come down with it and give the Islanders the 7-0 lead.

Unfortunately for the Islanders, the lead would be short-lived. On the ensuing kick, Santana ran the kickback for an 88-yard TD, tying the game 7-7 with 8:22 left in the fourth.

Down to the final 8 minutes, the defenses from both teams could continue to show off. As again, neither offense was able to move the ball consistently. It appeared however that in the final two minutes Santana would have a shot at a game-winning field goal as they drove to the Islanders 36. But as they had done all night, the Islander D came up with yet another big play as Alexander would strip-sack Santana’s quarterback with 47 seconds to play, sending the game to overtime.

Coronado would possess the ball first and go three and out. Meaning it would only take a field goal for the Sultans to walk away with the win. And, sadly for the Islanders and their fans, the Sultans got it after quickly working the ball inside the Coronado 10-yard line and then hitting the game-winner from 22 yards out for a 10-7 win for Santana.

The Islanders will look to shrug off the tough-luck loss next week, as they welcome Sweetwater High to town on Friday, Aug. 27.