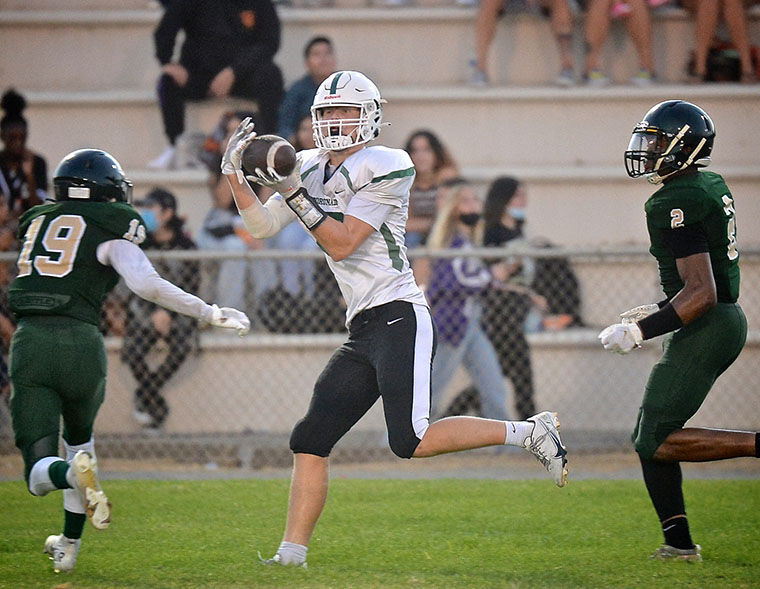 Coronado wide reciever Finley Alexander, No. 19, in the center, hauls in a pass during the first half Friday, Sept. 10, game at Mar Vista . The Islanders defeated Mar Vista 49-18. 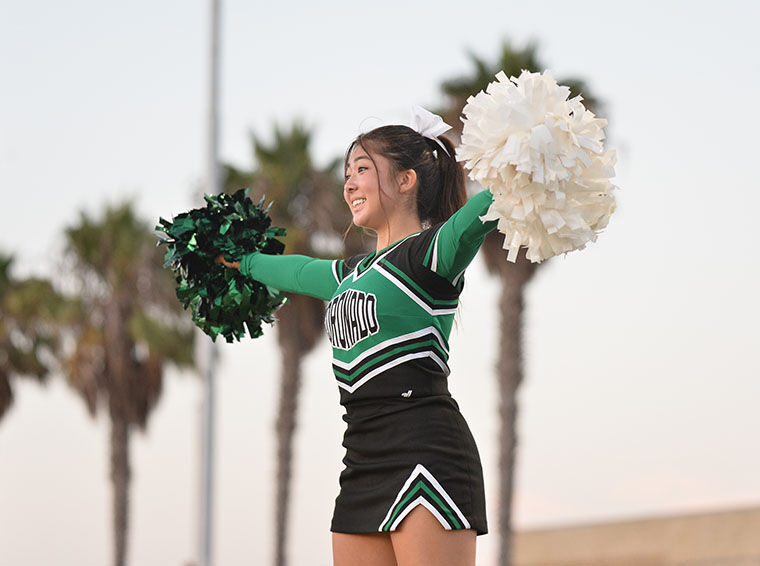 Coronado wide reciever Finley Alexander, No. 19, in the center, hauls in a pass during the first half Friday, Sept. 10, game at Mar Vista . The Islanders defeated Mar Vista 49-18.

If there is one way to describe the Islanders game versus Mar Vista High School this past Friday, Sept. 10, it would be to call it a mismatch, as the Islanders easily trounced the Mariners 49-18.

“This team is playing with a lot of confidence right now and it shows,” said Islanders Head Coach Kurt Hines of the Islanders. “They’ve worked hard and have demonstrated that they know what it takes to win,”

Much like they did last week versus El Capitan, on their first offensive possession, the Islanders got things started with a bang as they had an efficient four-play 56-yard drive capped off by a touchdown run by Zane Delcore to make it a 7-0 Islander lead and setting the tone for the rest of the night.

However, on the ensuing Mar Vista possession, Mar Vista would punch back, countering with a 67-yard touchdown pass, making it a 7-6 game with nine minutes left in the first.

Both teams would come up empty on their next few possessions, thanks to some stout defensive plays from the Islanders that included a sack by Finley Alexander and an interception by Connor Little, his third of the young season.

Following the Little interception, the Islander’s offense would again come to life, as they would make quick work of the Mar Vista defense, going 54 yards on just five plays as the drive was capped off by a 23-yard touchdown pass from quarterback Hudson Herber to Donny Couts, who ran a seamless wheel route to get behind the corner and the safety, making it a 14-6 game, giving the Islanders all the momentum.

The Coronado defense would again force another three and out on the ensuing Mar Vista drive, and even recorded a safety thanks to a blocked punt by Alexander to make it a 16-6 game.

It should be noted just how well the Islanders special teams unit played last Friday. Not only did they block a punt, but blocked two field goals, and had a punt and kick returns of over 30 yards from Hudson Bartell and Zane Declore to help flip field position in the Islander’s favor on multiple occasions.

Following the safety, Coronado would add yet another touchdown thanks to another quick drive highlighted by a great catch and run by Sean Kelly and a 26 yard-house call by Delcore extend the Coronado lead to 22-6 at the end of the first quarter.

I asked Hines about the Islander balanced attacked. “Coming into the game we knew we wanted to run the ball, but when we saw that some early passes were getting us chunk gains, we knew we wanted to balance the offense out. It was great to see us execute both parts of our offense so well.”

The second quarter would yet again be marked by Islander dominance.

After the Islanders defense forced a third straight three and out, thanks to a pair of sacks by JT Nelson and Asa Valdivia, the Islanders offense yet again capitalized. Coronado would have another quick five-play touchdown drive that again would be finished off by a six-yard rushing touchdown by Delcore, his third of the first half, making it a 28-6 game.

Mar Vista would get another touchdown on the board on their next possession making it a 28-12 game.

Coronado would take the 28-12 lead into the half. Just a week ago, we had seen these Islanders hold a substantial lead in the second half. Would it perhaps be a repeat of last week? Would they take their foot off the gas and let the game get close again?

The answer: Heck, no.

Coronado would come out in the second half and keep the pedal to the metal. To start the drive Gunnar Tonkin would haul in a 28-yard pass from Herber to push Coronado to their own 45. Two plays later Bartell would break off a nice 15-yard run that saw the senior truck over a Mar Vista defensive back to give the Islanders a fresh set of downs.

The drive would nearly stall, but on a third and 7, the Islanders would execute a screen pass beautifully to Couts as he would pick up another 15 and yet another first down.

“Donny has been huge for us this season thus far. He has taken on several roles for us because Donny is such a team player,” said Hines “An I’m happy that we have been able to make him a weapon at tight end/wide receiver. He gives our offense a whole other layer. He’s explosive.”

After another hard run by Bartell, Coronado would find themselves on Mar Vista doorstep yet again, and on 4th and goal, Herber would sneak it in for six, giving Coronado the 35-12.

And it would not take long for the Islanders to get the ball back. A tackle for loss by Bartell and Delcore would set Mar Vista way behind the chains on third down, forcing them into an obvious passing situation. On the third down, Nelson would tip a pass and cause it to float into the arms of Couts. Yet another Islander takeaway on defense.

Coronado quickly capitalized, punching in another score into the end zone after a six-yard rushing touchdown from Steven Davis extended the Coronado lead to 42-12.

The fourth quarter would see the Islanders continue to dominate. They would add yet another touchdown, and 18-yard touchdown from Declore to give him four total on the night. On the defensive side of the football in the fourth, the Islanders generated three more takeaways thanks to two interceptions, one by Logan Eastlick and another by Elias Valdivia.

When the clock would finally expire the Islanders would emerge as 49-18 winners and keep the Taufaasau Trophy in Coronado for another year, a truly dominant effort.

It was another fine show from the Islanders and by far their most complete performance as a team this season.

But Coronado has another challenge this week as they will face off against the Kearney Komets.

“Kearney is a very physical and athletic team. They have some big-big guys up front and run a ton of stunts upfront on the D-line. On the offensive side of things, they come out in a lot of different and unique formations, so we will have to be prepared for that,” said Hines. “But this is a group with a lot of confidence, and we will be ready for any test.”