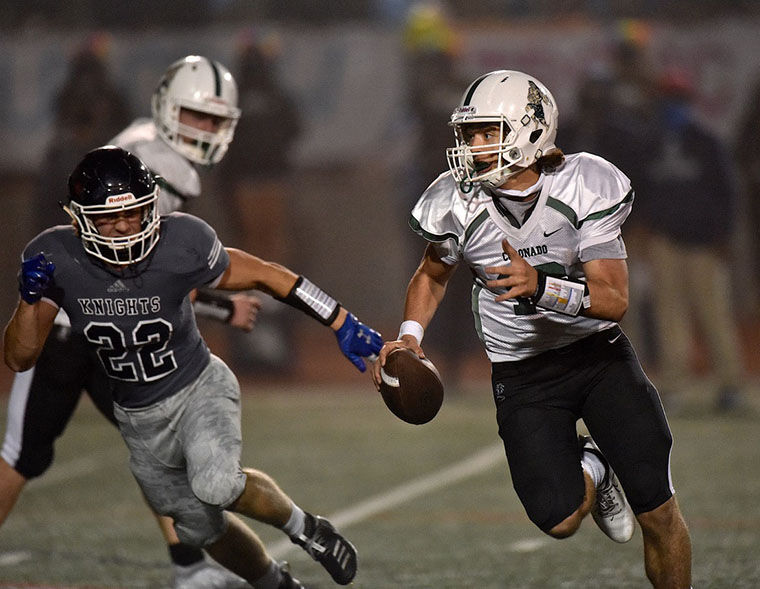 Coronado Islander quarterback Hudson Herber, right, takes the ball himself for a run up field to avoid the San Marcos Knights defensemen during the final quarter of the game, Friday, March 19, in San Marcos. The Islander lost 38-7. 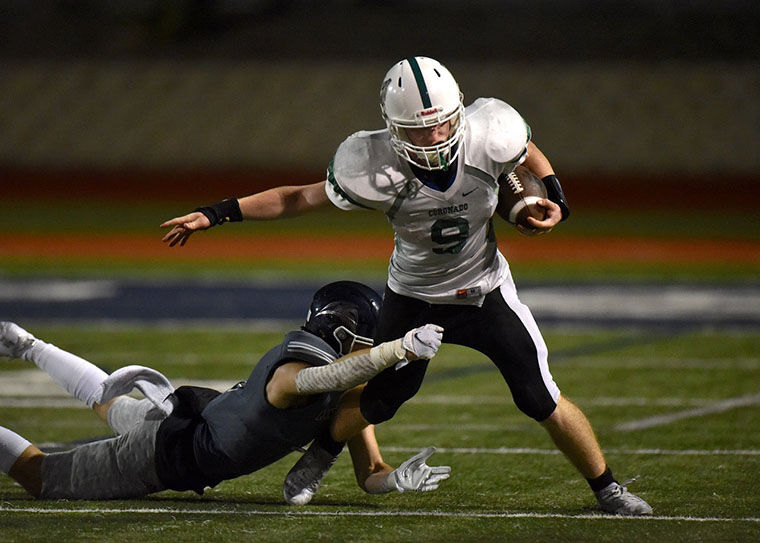 Coronado Islander running back Zane Delcore, No. 9, avoids the tackled by a San Marcos Knights defensemen during the second half of of the game on Friday, March 19, in San Marcos. The Islanders lost the game 38-7. 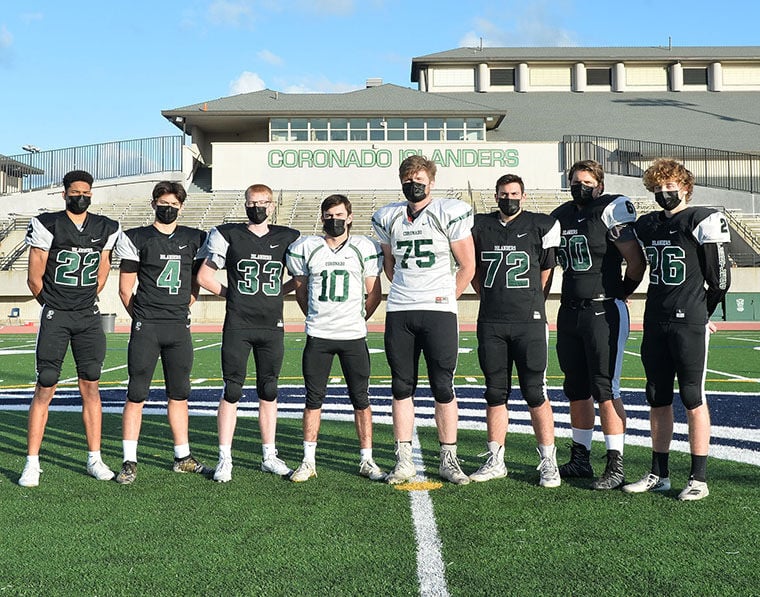 Coronado Islander quarterback Hudson Herber, right, takes the ball himself for a run up field to avoid the San Marcos Knights defensemen during the final quarter of the game, Friday, March 19, in San Marcos. The Islander lost 38-7.

Coronado Islander running back Zane Delcore, No. 9, avoids the tackled by a San Marcos Knights defensemen during the second half of of the game on Friday, March 19, in San Marcos. The Islanders lost the game 38-7.

After a year of waiting and wondering, on Friday, March 19, Friday Night Lights returned for the Coronado Islanders Football Team. Regardless of win or loss, the fact that parents were able to sit in the stands and cheer on their kids for 60 minutes on a Friday night was a victory in its own right.

But even so, there was a game to be had. On Friday, the Islanders traveled up the I5 to face Division I powerhouse, the San Marcos Knights. The Knights came into Friday ranked just outside of the top 10 here in San Diego county. It was a test that some in Coronado might have questions about, but it was one that Head Coach Kurt Hines felt his team was up to.

The first quarter started slow for both the Islanders and the Knights as both teams’ first two drives would stall without points, as both teams struggled to find a rhythm on offense. However, what became apparent quickly was the Islander’s effort and hustle on defense. Despite being undersized in the trenches, the Islanders were able to stop the Knights’ running attack in the first half.

“Our front seven did a great job in the first half. They did a good job of closing up rushing lanes quickly and weren’t letting San Marcos break off any big ones on us,” said Hines.

The Islanders would start to move the ball on their third drive of the night, but it would be stalled out after senior quarterback Brady Roullier would be intercepted, setting up the knights at their own 42-yard line. Following the interception, San Marcos would move inside the red zone for the first time with 3:30 left in the first quarter. But the Islander’s defense would yet again show its teeth, thanks to back-to-back tackles for loss by Clark Anderson and Jayden Berrar that would force San Marcos to settle for a field goal, making it a 3-0 game at the end of the first quarter.

Early in the second quarter, the Islander’s defense continued to hold strong until San Marcos broke off a 46-yard run taking the ball down to the one-yard line. They would cash in and make it a 10-0 lead with 11:17 left in the half on the next play. On the ensuring Islander possession, Coronado would work their way into San Marcos territory, thanks to a reception from junior No.12 John Cook, a first down rush from junior Zane Delcore, and a successful 4 and 1 conversion.

However, the drive would again stall, forcing Coronado to punt. The Coronado defense would step up as they would force yet another three in out. On the ensuing San Marcos Punt attempt, the Knights would huck the ball over their punter’s head and fall on it on their own 9-yard line, setting up Coronado with its first goal-to-go situation. A sack on the next play would push Coronado back to the 12. But quarterback Roullier would find Cook up the right seam for a 12-yard TD pass, making it a 10-7 game and pulling the Islanders to within 3 points as they hit halftime.

“I’m proud of how we fought the whole game, but the way we played that first half was outstanding. We were going toe to toe with them when really no one gave us a shot,” said Hines.

Along with the strong push, the Islanders were getting upfront; the No-fly zone was also in full effect. Coronado’s secondary, led by senior Corner Aiden O’Neil, who had three pass break ups in the first half alone, held the Knights to under 50 yards passing in the first half.

Unfortunately for Coronado, the second half would not be a repeat of the first. At the half, it was clear the Knights switched their offensive game plan to one tactic, ground and pound. As for the right of the night, San Marcos would run the ball for over 120 yards in the second half. As with eight Islanders playing both on offense and defense, Coronado slowly wore down on the defensive end.

However, even when down by multiple scores, Hines and the Islanders never gave in. Coronado tried five times on fourth down and attempted two fake punts to get their score higher.

The Islanders would ultimately fall to San Marcos 38-7. But while the score appears lopsided, the Islanders certainly have positives to build on. Hines reflected on the game, “We played really strong in the secondary all night, and for most of the game, we played well upfront on defense. We’re going to open up the playbook more on offense next week, but I know we’re gonna get into a rhythm on offense. I am just really proud of the effort our players put forth on Friday.”

Coronado’s home opener will be this coming Friday, March 26, at 7 p.m. where the Islanders will look to rebound and pick up their first win of the season.