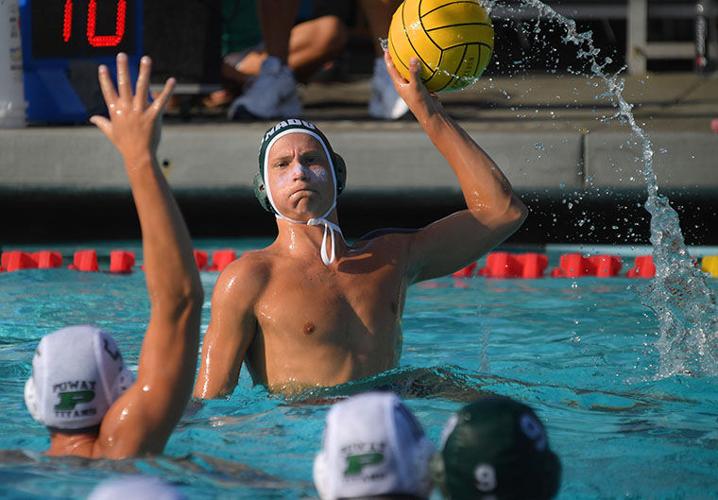 Junior lefty Luke Machin looks to pass to a teammate during recent Islander water polo action. The team is 2-2 this year, with one loss ending in an 8-9 score in an exciting over time game against Poway. 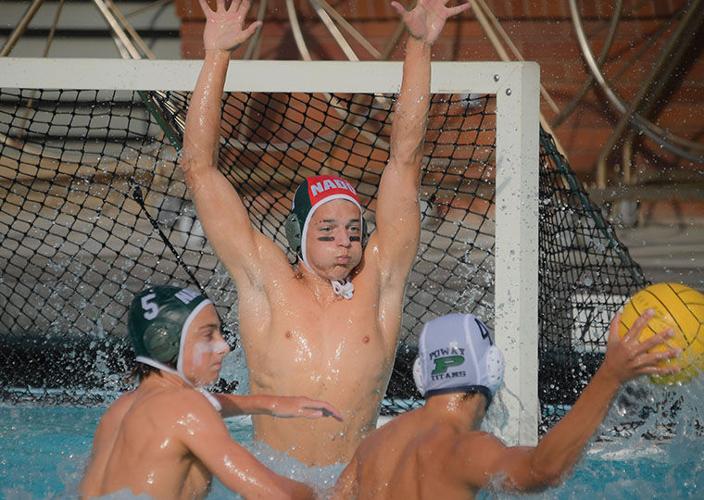 Senior goalie Sebastian Palomera, along with sophomore Ryan Mondzalewski (#5 in green cap) team up to prevent a goal during Islander water polo action.

Junior lefty Luke Machin looks to pass to a teammate during recent Islander water polo action. The team is 2-2 this year, with one loss ending in an 8-9 score in an exciting over time game against Poway.

Senior goalie Sebastian Palomera, along with sophomore Ryan Mondzalewski (#5 in green cap) team up to prevent a goal during Islander water polo action.

The Islander boys water polo team looked for their third win in a row this past Saturday, September 10, as they took on the Lancers of Carlsbad High School.

The Islanders entered into this non-league match fresh off a previous win versus Westview High School, giving the boys in green caps a bit of momentum.

In the first quarter, the Islanders would come out looking as if they were ready to produce more offensive fireworks thanks to shots on goal from Maximo Diaz and Thatcher Lytel. The early attempts would quickly turn into goals as just two minutes into the match, Ryan Mondzelewski ripped the back of the net to give Coronado the 1-0 lead.

The early goal from Mondzelewski would soon be added onto after Lytel would nab a steal and coast-to-coast goal to make it a 2-0 Islander lead with 3:47 left to play in the first period.

Carlsbad, however, would respond just a minute later with a goal of their own to bring the match closer with the score at 2-1.

The Carlsbad goal would not shake the Islanders, which only motivated their offense further. In the final minute of play, the Islanders would tally two more goals to counter that scored by Carlsbad, one coming from Diaz and the other from Lytel for his second goal of the period.

The two goals would give the Islanders a 4-1 lead at the end of the first period, but in the second period, things would take a slight turn.

At the start of the second period, the Islanders would get a pair of excellent saves from Sebastian Palomera, including a top-class pen shot save, to keep things at 4-1. But Carlsbad’s offense would remain persistent and add on two goals to make it a 4-3 game, despite the Islander defense’s best efforts.

The two goals would be all the offense that would be seen in the second period, and as a result, the two teams would head into the half with the Islanders holding the slim 4-3 lead.

Coming out of the half, however, it would appear that the Islanders may have fixed their second-period offensive struggles as Thatcher Lytel would rip the back of the net from long range to extend the Islander’s lead back to two and make it a 5-3 game.

Yet just as quickly as Coronado created separation, Carlsbad reeled back in as the Lancers yet again responded with two goals of their own, tying the game at 5-5. Coronado would get one SOG late from Mondzelewski, but overall the remainder of the third quarter would be a defensive show off, and we would head to the final period tied.

In the fourth period, the story for the Islanders would sadly be the same as it was in the third, as the offense failed to produce a goal. They had a few strong opportunities thanks to shots on goal from Luke Machin and Hunter Bosworth, but nothing could find the back of the net.

Carlsbad would manage to get on goal past Palomera, who had been just fantastic all match, that would prove the be the game-winner. Giving the Lancer the 6-5 victory over Coronado.