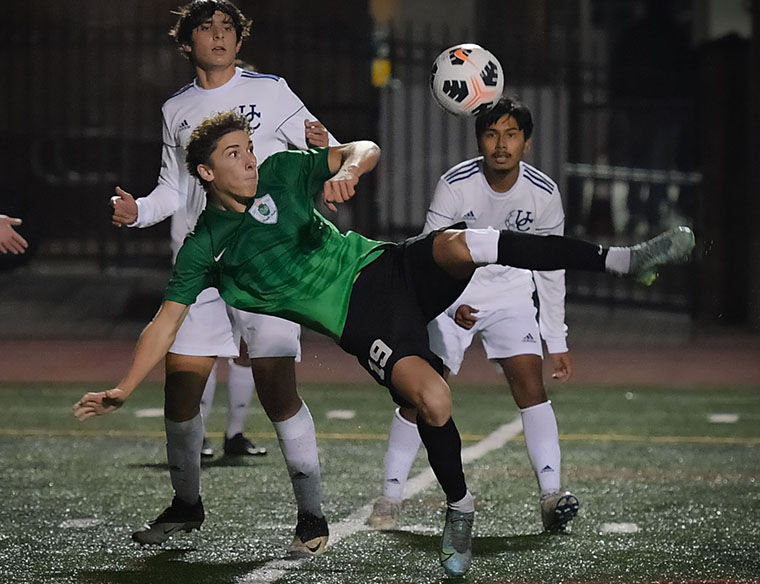 Islander senior CJ Fodrey goes for the bicycle kick in Friday’s 3-0 victory over University City High School. The Islander record stands at 2-0-1 on the young season with home games both this Wednesday and Friday. 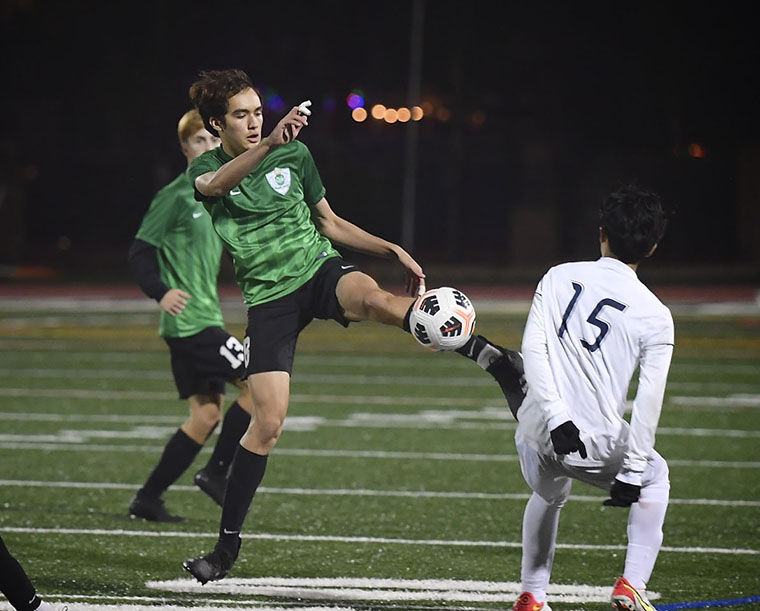 The Islander defense was up to task in last Friday night’s home game vs. University City, pitching a 3-0 shutout. Pictured: defender Conner Mattick works to intercept and clear a ball.

Islander senior CJ Fodrey goes for the bicycle kick in Friday’s 3-0 victory over University City High School. The Islander record stands at 2-0-1 on the young season with home games both this Wednesday and Friday.

The Islander defense was up to task in last Friday night’s home game vs. University City, pitching a 3-0 shutout. Pictured: defender Conner Mattick works to intercept and clear a ball.

On Friday night, the stands of Niedermeyer Field were packed quite well on what was a rather brisk December night. But for those who sat in the cold, they were treated to quite the show as they watched the Islanders Boys Soccer team cruise to a 3-0 win over University City (UC).

Coming off a tie in their previous match versus El Camino, the Islanders knew they needed a bounce-back win to get momentum going in the right direction.

“Coming out and playing this well on your home field in front of a packed crowd is very rewarding. To have a performance against a good team like UC is very exciting,” said Islanders head Coach Aaron Brooks.

In the early minutes of the first half, the Islanders controlled possession quite a while, however, they were a tad “trigger happy” with their shots as only one of the Islander’s first four shots would be on goal. It just appeared the Islanders were trying to do too much too early.

But those early minutes jitters would quickly fade away. Around the 20th minute, the Islander’s attack became much more fluid as they would fire off three consecutive shots on goal, one from CJ Fodrey, Conner Buckley, and Jack Hunt. While none of the shots found the back of the net, you could get the sense that it was only a matter of time before the Islanders would draw first blood.

In the 31st minute that feeling would become a reality. Following a foul, Nic Lorr would step up to a free kick 26 yards from goal. Lorr would send in a top-class cross that would be headed in by Dylan Grovenveld, giving the Islanders the 1-0 lead.

University City would quickly have an opportunity to respond after a pair of more than questionable foul calls gave them two free-kicks in dangerous spots. Fortunately, on both attempts, the Islander’s defense would be up to the task, thanks to a nice clearance from Conner Mattick and a fine save in goal by Tony Miley, keeping the Islanders up 1-0 at the half.

Coming out of the half Coronado would continue to turn up the heat with their aggressive play as they earned two corners in the 53rd and 54th minute.

However, while the constant offensive attack continued for the Islanders, so did the brutal officiating. Despite obvious fouls being committed, the Islanders did not benefit from a single call and were even issued a pair of yellow cards on what were rather clear, clean tackles.

“The officiating was less than ideal,” said Brooks “ But I loved that it didn’t stop our guys from being aggressive and didn’t let them get rattled. They kept their foot on the gas.”

Over the final 15 minutes, the Islanders would continue to pepper the UC goal with shots and keep up their high-pressure attack. That aggressive playstyle would again be rewarded in the 72nd minute when Hunt would be fouled in the box, giving the Islanders a penalty kick. Lorr would then step up and bury one in the back left of the net to make it a 2-0 game.

And just seven minutes later Coronado would add yet another goal, just for good measure, as Garett Sauter would drill in a cross that would land at the feet of Fodrey who would do the rest, giving the Islanders the 3-0 win.

“We did a great job of attacking, capitalizing on crosses, and executing. UC is a good team, so to come out with a win like this is good to see” said Brooks

With their record at 2-0-1, the Islanders will have easily their biggest test of the season this coming Wednesday, Dec. 15, when they face Point Loma.

“Point Loma is returning every starter from last season,” said Brooks. “We play them every year and it’s a great rivalry. We know it’s going to be a dog fight all the way to that final whistle.”