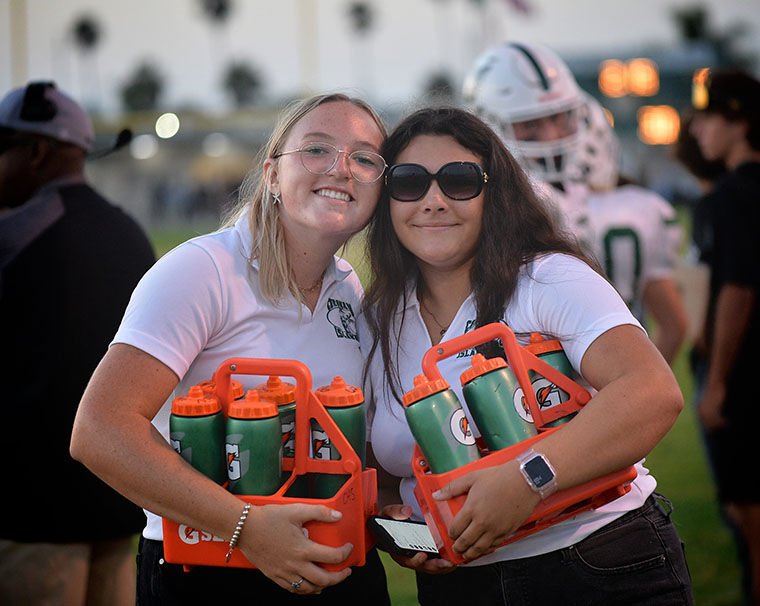 Coronado High School seniors Cate Carlson and Mary Penny are two of this year’s team managers of the Islanders football team. They work hard during games and practices, ensuring the players are well-taken care of and hydrated. 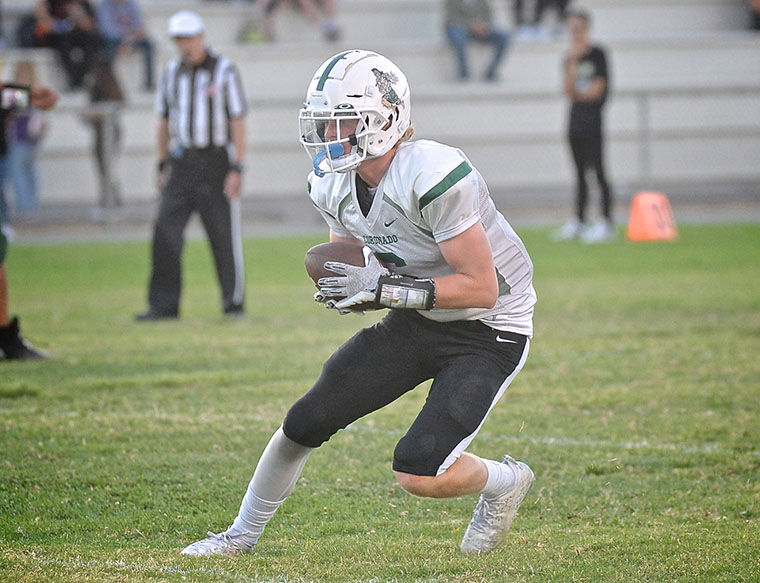 Coronado Islander wide receiver Gunnar Tonkin, No. 6, looks for space after catching a pass during the first half Friday, Sept. 10, 2021 in Mar Vista. The Islanders defeated Mar Vista 49-18.

Coronado High School seniors Cate Carlson and Mary Penny are two of this year’s team managers of the Islanders football team. They work hard during games and practices, ensuring the players are well-taken care of and hydrated.

Coronado Islander wide receiver Gunnar Tonkin, No. 6, looks for space after catching a pass during the first half Friday, Sept. 10, 2021 in Mar Vista. The Islanders defeated Mar Vista 49-18.

The term blow out gets thrown around a lot in sports. Almost too loosely for my taste, but what the Coronado Islanders football team did to the Kearny Komets warrants being called a blowout.

For those around town who haven’t heard, the Islanders dismantled the Komets by the score of 78-0. It was the kind of game that you could just tell would get messy quickly and early on.

Kearny started the game with the ball on their own 22 and proceed to lose 12-yards on the next three plays thanks to three tackles for loss by Asa Valdivia, Finley Alexander, and JT Nelson. The Komets punter would sadly shank his kick that it would only go 12 yards and set up Coronado in the RedZone of their first drive, it would take the Islanders four plays to punch in their opening touchdown thanks to a quarterback sneak by Hudson Herber.

The ease with which the Islander offense moved the ball on their first drive, would continue for the entirety of the night, as the Islanders would only punt on time on Friday night.

Following the opening touchdown, the Islanders would quickly force another three-and-out thanks to a pair of pass breakups by Donny Couts and Elias Valdivia. The ensuing Islander drive would only take two plays and 33 seconds to go 44 yards in large part to a 36-yard touchdown run by Zane Delcore that would extend the Islander’s lead to 14-0, just four minutes into the contest.

And the scoring would not stop there. Over the final eight minutes of the half, the Islanders would score four more times thanks to a pair for 40+ touchdown runs by Delcore and a pair of pick-6’s by Elias Valdivia and Graham Bower, creating a 41-0 Islanders at the end of the first and putting the game way out of reach just one quarter into the game.

Things would only get more lopsided in the second quarter thanks to yet another pick-6, this one by Sean Kelley. A 54-yard touchdown pass from Herber to Couts, and a 27 Yard touchdown run by Steven Davis to make it a 63-0 game at the half.

For the final half of Friday’s game, the Islanders clearly, and rightfully so, took their feet off the accelerator, as they only ran option, counter, and drive plays to run the clock and keep the ball out of the air.

Coronado’s play-calling still yielded success as the offense ate up the clock and dominated time of possession and pushed across yet another touchdown after a nice read-option run by Bower for a 27-yard scamper and score.

Coronado would score one final time in the fourth quarter thanks to Elias Valdivia’s second pick-6 of the night, capping off the Islanders 78-0 victory over the Komets.

In such a dominant victory, it would be hard to imagine that some could find errors or ways that a team needs to improve. But for Islanders Head Coach Kurt Hines, there were plenty of things his team still needs to work on. “I think in the trenches our first steps and push on the line could have been better and our blocks on the outside in our stock blocks could have been improved as well,” said Hines

“But I feel fantastic with where we are at right now. We’re 4-1, and we really should be 5-0. We’ve beaten four teams that are in a higher Division than us and the offense has really come together and on defense they have continued to dominate and generate turnovers,” continued Hines. “We’ve put ourselves in a really good spot as we get ready to gear up for our league schedule.”

Due to unforeseen circumstances Hoover High School has decided to forfeit their game against the Islanders, scheduled for Oct. 1. Coronado will be awarded the win and have a 1-0 record in City League play.

The Islanders will have a bye this week, and will be off the following week from the cancelation, so the team can rest, recuperate and prepare to face their biggest test this season when they open their league schedule versus San Diego High on Oct. 8.

I asked Hines about what he and the Islanders expected to see in the game against the Cavers. “It’s always a really close game when we play san Diego. They don’t run a ton of formations but they do play very physical and fly around the ball. I’m really looking forward to the match-up.”

The Islanders are searing hot right now, and with the most pivotal games of their season quickly approaching it should be a fun ride for these Islanders.