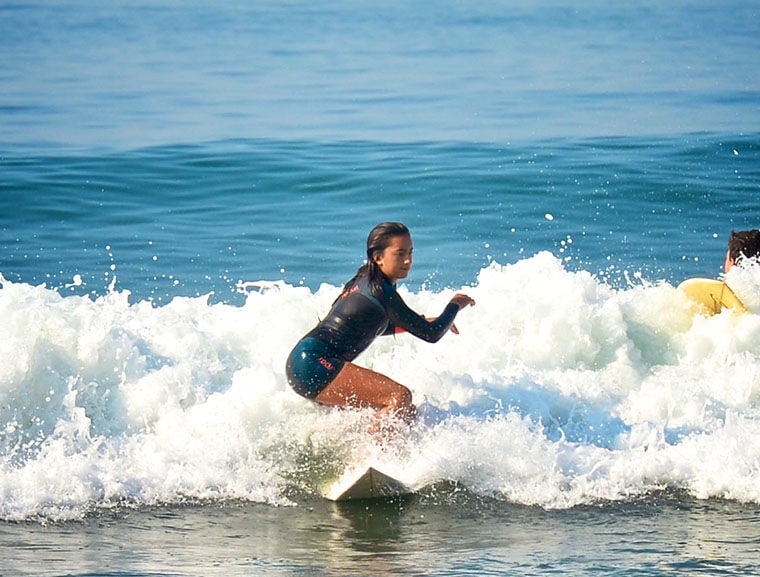 Sophomore Lexie Hammond rides a wave during Sunday’s CHS surf team practice. The Coronado High School Surf Team, under the seasoned leadership of long-time local and competitive surfer Mike Gillard, has been able to practice during COVID, with the exception of the period when most county beaches were closed at the beginning of the shutdown. 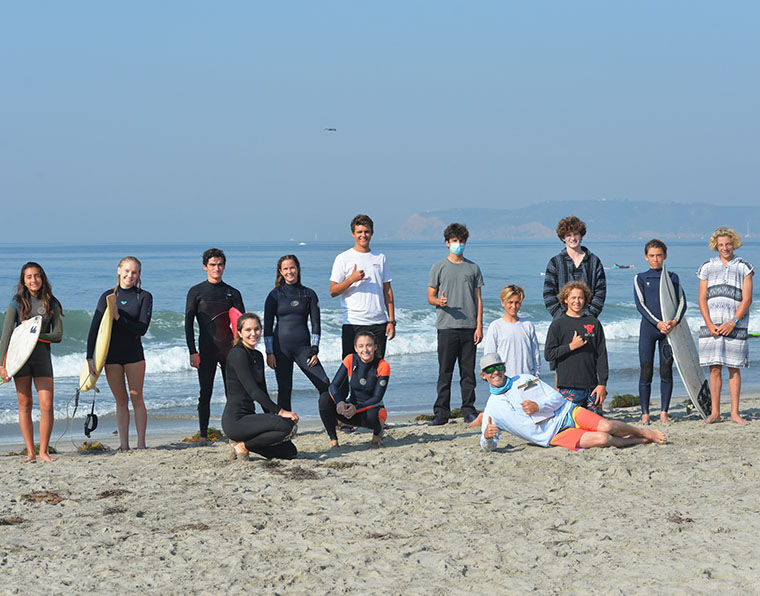 Sophomore Lexie Hammond rides a wave during Sunday’s CHS surf team practice. The Coronado High School Surf Team, under the seasoned leadership of long-time local and competitive surfer Mike Gillard, has been able to practice during COVID, with the exception of the period when most county beaches were closed at the beginning of the shutdown.

High school sports around the country look a lot different than they did a year ago, due to the often frustrating domino effects of the COVID-19 pandemic.

While still impacted by the shutdown, surfing, by nature requires a lot of physical distance, and thus local board riders of all ages have, for the most part, been able to enjoy the quintessential Southern California sport.  The Coronado High School Surf Team, under the seasoned leadership of long-time local and competitive surfer Mike Gillard, has been able to practice, with the exception of the period when most county beaches were closed at the beginning of the shutdown. Gillard picked up the reins of the team after the tragic death of beloved local waterman and coach Stan Searfus in January of 2018.

The season, which runs from October through March, was somewhat affected by the shutdown in the spring, with only a few of the meets, which are operated by Scholastic Surf Series (SSS) held, and no annual State Championship, which normally takes place in April.

As noted above, while the boarders are always socially distanced while in the water, due to state and county guidelines, there are, as of yet, no competitions on the calendar. The co-ed team is holding group practices on Sundays, with smaller cohorts gathering at either Stan’s Beach or North Beach a few other days during the week. Surfers also travel to other county beaches, as far as Oceanside and occasionally to Orange County, so they can practice in a variety of surf conditions, as each location has different breaks which create different waves.

Thought it may appear a bit dangerous to non-surfers, the sport is relatively safe, as long as the participants have basic water safety skills and the obvious necessity of the ability to swim. Team member Rylie Brenden remarked that most, if any, surfing injuries are minor, and are usually the result of bad surfing etiquette, such as stealing a wave, cutting off a surfer, or “dropping in” on another rider. Stingrays are typically the biggest issue in terms of injuries, and most enthusiasts are aware of them and know how to avoid them.

The team officially operates as a club, independent from CIF or the Islander Sports Foundation, which gives them a bit more flexibility, with the added benefit of not requiring field or court time. The downside to that is that they are self-funded, though they are grateful for the sponsorship by local surf shop Emerald City, which has generously donated t-shirts and tents to the organization.

I had the chance to chat with team parent/manager Alexandra Polles, whose daughter, Marianna Dick, is an active member of the team. Polles is quick to point out that while the student athletes enjoy riding the perfect wave, the small team—currently there are 18 members—also enjoys giving back to the community. They frequently hold beach cleanups, and volunteer at local surfing events, most notably the annual Lorton Mitchell Longboard Competition, where they assist with setting up, check-ins, timing the heats, and keeping the events running smoothly.

As surfing is an individual sport, it might seem odd that they can participate as a team, but senior team captain Tommy Loutzenheiser walked me through how the team part of a competition works. In the team portion of a competition, surfers participate in three versus three heats, with three surfers from each team going up against each other in 15 minute heats. Each surfer has their two best waves scored, and at the end of the heat, the judges rank the surfers from first to sixth place, with each placement earning a certain number of points. At the end, the points are tallied from each three surfers from both teams, and, as you might expect, the team with the most points wins.

Polles also observes that surf competitions are more than just contests between teams and individuals. Whole families get involved in the all-day event, and the athletes, parents, and fans cheer for their teammates and rivals alike. There is an abundance of camaraderie, from the pre-dawn hours until after sunset, and everyone helps out.

Polles notes that interested young high school surfers can join the team any time, with the caveat that they can already surf. While most of the surfers attend high school in Coronado, area students that attend schools without their own surf team are welcome to join as well.

The team is also welcoming any local sponsors. They do their best to keep membership dues at a minimum, and don’t charge additional competition fees. For those interested in learning more about joining or sponsoring the team, please reach out to Polles at AJPolles@gmail.com.