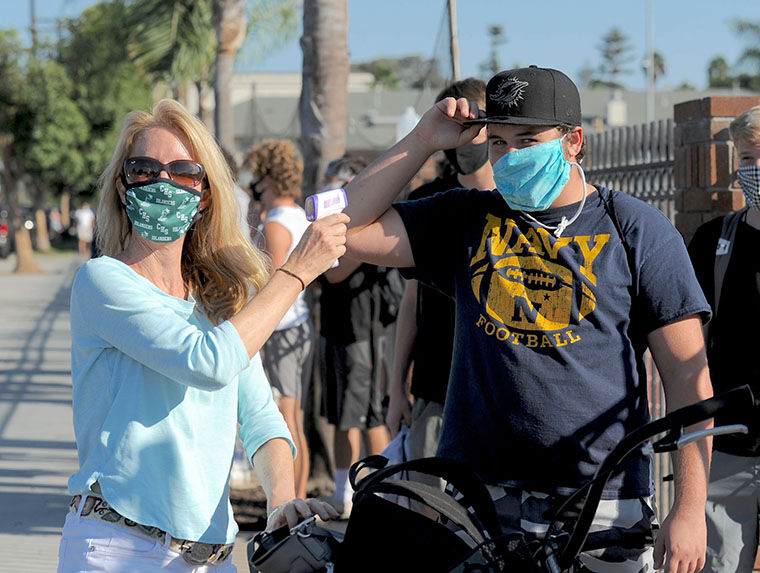 Islander Football Booster president Stephanie Anderson takes the temperature of player Asa Valdivia prior to a recent practice. The mask that Anderson is wearing is also available for purchase as part of the club fundraiser this season. 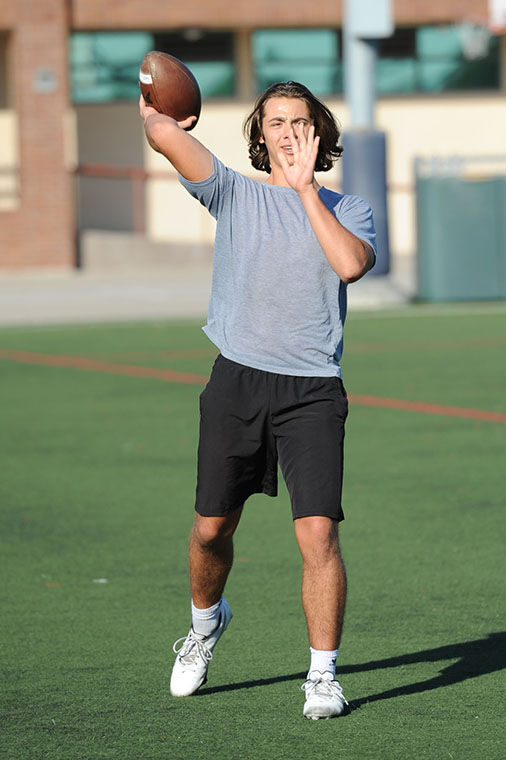 Islander Football Booster president Stephanie Anderson takes the temperature of player Asa Valdivia prior to a recent practice. The mask that Anderson is wearing is also available for purchase as part of the club fundraiser this season.

If the current Coronado High School (CHS) Islanders Football season had gone as originally scheduled, the team would have played their final regular season game at the home of the Crawford Colts this past Friday night.

As with almost everything else that 2020 has flung at us, no wrenches were spared in terms of football, and the Friday night lights have remained dark, the fields and stands empty and quiet.

As depressing as that sounds, CHS head coach Kurt Hines remains encouraged and positive. Hines and his crew of coaches and athletes, though limited to twice a week practices, are working to keep the squad active and in shape, with Hines reporting, “The coaching staff and I have been overwhelmed with the effort and enthusiasm by our young men!”

Currently the team is practicing as an Islander Sports Foundation club, operating under the guidelines set forth by the state and county. With football having significantly more players than most other sports, both Cutler Field at Coronado Middle School and Niedermeyer field at CHS are being utilized, with the team divided into four cohorts, two on each field, which allows plenty of distance.

Each group remains the same throughout the length of the club season, with the same coaches assigned to each, so there is no intermingling of players or coaches.

It goes without saying that football is a full contact sport, in fact, perhaps the one you think of first when you hear the term “contact sport.” So how does a team prepare for an upcoming season during a time where nothing is certain and no contact is allowed?

Senior lineman Clark Anderson illustrates that optimism and a good attitude are key, along with staying in the best possible condition. He explains that the team is working on footwork and technique, while staying in shape with lunges and stretching. “It’s a little difficult to get that team feeling, as without contact it’s not very ‘football-y’,” he said, “but we’re optimistic and looking forward to getting our pads, and are hoping for contact practices or a possible scrimmage in December.”

The team and coaching staff are working on a few plays, though, since actually executing them is verboten, they are essentially walked through in something of a gridiron pantomime. Passing is allowed, at least, so some amount of throwing and catching skills can be honed, but with no other contact permitted, the mastery of tackling a ball carrier will have to wait until December.

Hines will have some old and some new faces joining him on the coaching staff this year, with Mark Davis, Phil Simpson, and Keith Englehart, to name just a few, returning to the sidelines. One new face this year will be that of Roseanna Smith, who will help out with the offensive and defensive lines.

Continuing in her position as booster president, Stephanie Anderson works tirelessly to keep things organized, taking temperatures before every practice, and keeping parents and fans in the loop. “The parents and the booster club are so appreciative of our coaches. Every single one of them is volunteering their time until the actual season starts in December,” she said. The main goals of the season, Anderson notes, are continuing camaraderie, and parents and athletes remain hopeful that somehow they can pull off both a homecoming and a senior night.

With no physical games, there are no fans to pay admission or purchase concessions, so the booster club is fundraising as they are by selling Islander face masks, and will also re-open the Football Store, which can be found on the Islander Sports Foundation website, www.islandersportsfoundation.com

With so many obstacles in the path of all local sports organizations, it would be easy to become discouraged, but Hines is a maker of lemonade. Asked how he’s handling all of this, he doesn’t miss a beat. “Although limited tremendously with what we can do, we are practicing what we preach as coaches, and are controlling the ‘controllables.’”