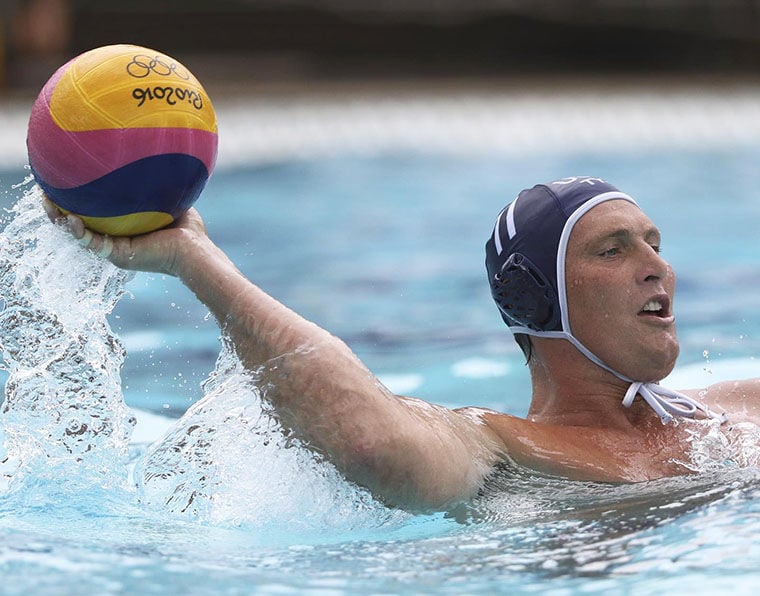 Jesse Smith (CHS ’01) is shown here competing in the Olympic Games in Rio de Janeiro. Smith is Captain of the Senior Men’s National Team and is looking to compete in his fifth Olympics in the 2021 Tokyo Games. 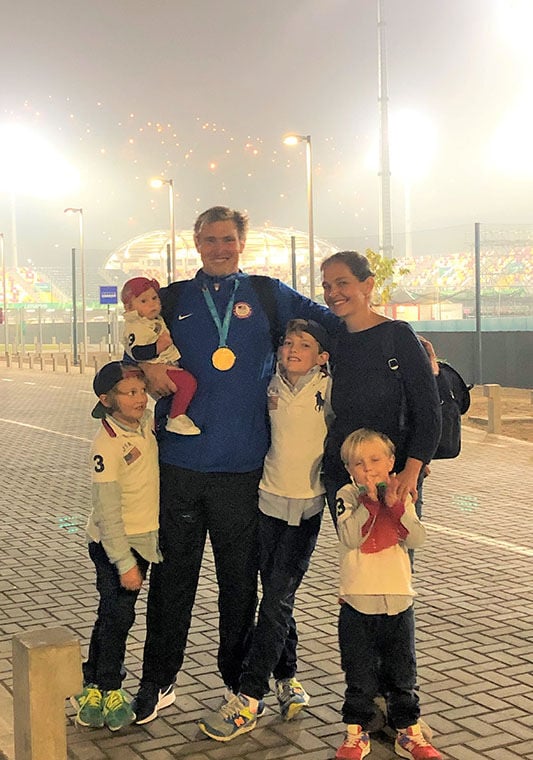 Jesse Smith and his family celebrate after the U.S. Men’s National Water Polo Team qualified for the 2021 Olympic Games in Tokyo. The photo was taken in Lima, Peru after the United States won the Pan American Games. Notice Smith is wearing a Pan American Games Gold Medal in the shot.

Jesse Smith (CHS ’01) is shown here competing in the Olympic Games in Rio de Janeiro. Smith is Captain of the Senior Men’s National Team and is looking to compete in his fifth Olympics in the 2021 Tokyo Games.

Jesse Smith and his family celebrate after the U.S. Men’s National Water Polo Team qualified for the 2021 Olympic Games in Tokyo. The photo was taken in Lima, Peru after the United States won the Pan American Games. Notice Smith is wearing a Pan American Games Gold Medal in the shot.

When it was first announced the COVID-19 Pandemic had caused the postponement of the 2020 Tokyo Olympic Games, my first thought was, “How is that going to impact Jesse Smith?” To provide some context, I have been covering Jesse (CHS ’01) for two decades, dating back to when he was the star and centerpiece of the Islander Boys Water Polo Team in 2000 which was universally deemed to be the best in the nation.

In the 23 years I have written a sports column for this publication, Smith remains the most dominant single-sport prep athlete I have covered, and including his high school playing days, I’ve written more about him than any other Islander athlete. Proof of his playing ability may rest with the fact that Coronado won the CIF San Diego Section Division II titles in 1998, 1999, and 2000, and he was voted CIF Player of the Year for the latter two seasons.

Smith played collegiately at Pepperdine University and then embarked on a professional career, which has taken him all over the world. I knew he was an exceptional athlete, but a conversation with Randy Burgess, Smith’s coach at Coronado High School, told me about his dominance in the sport. Burgess said, “When Jesse is on a pool deck anywhere in the world, people know who he is.”

Smith was first selected for the U.S. Olympic Team in 2004, where he competed in the Games held in Athens, Greece. In short order he competed in Beijing, China where the team won a Silver Medal in 2008; in London, England in 2012 and Rio de Janeiro, Brazil in 2016. Appearing in the 2020 Tokyo Games would have been his fifth Olympiad, tying Tony Azevedo for the U.S. Mens Water Polo record for most Olympic appearances. Now that accolade will have to wait for another year.

Over the past several years, most recently 13 months ago, Smith and I would get together and collaborate on an article as an Olympics approached. “We qualified for the Olympics by winning the 2019 Pan American Games in Lima, Peru which were held July 26 to August 11,” Smith explained last week when we met. “That was super cool, and my wife Brittany and the kids came down for that. It was cool to win the Gold Medal and it was important the kids were there.”

Smith continued, “I’ve been training full-time for the Olympics since January. I was playing in Greece but going back and forth from there to training with the U.S. National Team in Torrance. I traveled with the team in January 2020 to Greece, Italy, and Austria. I came home to Coronado to rest for a while and went back to Greece to play for the Panathinaikos Club, which is the second biggest team in Greece. They have a really young club and they are trying to stay in the First Division next year. I was there for the important games and it was more for mentorship and experience.”

Smith’s water polo travels came to a screeching halt. “I came back home in February for a National Team training camp and was supposed to go back to Greece in April, but I had to cancel everything. I still have an apartment full of stuff there. Another player I know from Australia got caught in the quarantine in Italy.”

Although the Tokyo Olympics are now slated for July 23 to August 8, 2021, Smith who is the U.S. Mens National Team Captain, has been going full bore since March 15 even though the squad’s practice facility in Torrance remains closed. “The team works out every day and we have a Zoom video meeting twice a week. We have a Zoom meeting with our sports psychologist Brian Alexander, who lives in La Jolla once a week and a team briefing once a week. That has been our framework since mid-March.”

Smith has played water polo on the world stage since 2002 when he played for the U.S. in the FINA World League. I asked him what he does better now in competition, than he did then. He laughed and replied, “I’m much more resilient and I have a lot more tools that I can use to solve unexpected problems. I’ve been doing a ton of meetings with small groups, talking about inspiration, motivation, and enthusiasm. I think that is one of the beauties of sports, being able to improve your look at decision making and how I could have done that better. Applying a sports mentality to other stuff is super powerful and I have experienced a lot in a competitive environment. I love playing water polo and having the opportunity to play. I love going to training. I’m the Captain and the oldest guy on the team. I’m really excited to do everything I can to make it work and wind up with a medal for the U.S. team.”

And the bigger challenges now as opposed to nearly 20 years ago? “It definitely takes me longer to recover from bumps and knocks. But I am way more tuned into it and better at dealing with it. We are so much better off now taking care of those things. I’m on the team because I believe the group can be successful. It doesn’t matter how old you are or your experience but being able to believe in something is super important. That plays into resilience, persevering and not giving up. Those are traits I really admire. Keeping the will and motivation alive are the biggest obstacles to keeping your passion alive.”

I then asked Smith about the best player he ever competed against, assuming the answer would be one of the 6-8 players scattered throughout the rosters of the Eastern European water polo powerhouse countries. The answer was much closer to home, a 6-7, USA Water Polo Hall of Fame athlete from Northern California. “Chris Humbert was the best center in the world for a while during the 1996 and 2000 Olympics,” Smith recalled. “He played at Cal Berkeley and I’m in contact with him now. He was on the Mens Senior Team and I was 14. He was training for the 2000 Olympics and I met him at a meet and greet with the National Team. Another player was Layne Beaubien, who used to help me out in practice. When I was a freshman in high school, Layne was a junior at Stanford. He was a really good teacher and a person you could look up to as an image of success. He won the NCAA’s at Stanford and was willing to share tips. When I joined the National Team, Layne really looked out for me and he did that for a lot of players from Coronado.”

Smith discussed the current U.S. Mens National Team, which has 19 members. That squad will be trimmed to 12 players and one alternate to become the U.S. Olympic Team. “We’re ranked No. 9 in the World right now. I think we have the best center in the world in Ben Hallock, who plays for Stanford. And we have Alex Bowen, a San Diego guy (Santana High School) who is really good. We have a great staff and we have a lot of support from our national governing body. Part of my role as Captain is to make sure everybody sticks together, speaking up when things are falling apart. I help get everybody on the same page, following Head Coach Dejan Udovicic’s directions efficiently and directly. There is so much opportunity for our team and we have great young players. We have to put the time in and train. Some of our best players are in college and having another year to prepare for the Olympics is kind of awesome. It’s a silver lining for all of us.”

A few paragraphs back reference was made to ‘Brittany and the kids,’ all of whom are a huge part of Smith’s life. He provided an update on the brood. “Brooks is 10 years old and he finished fourth grade today (last Friday) at Village Elementary. It was pretty crazy last month with Zoom calls. The teachers did such a good job with all of the continuing education. Samuel is eight and in second grade at Sacred Heart. He has another week of school and the teachers did a great job there as well. Sawyer is five and in preschool at Graham Memorial Presbyterian. Our friends in Coronado call him ‘Baby Jesse’ because he looks just like me when I was four years old and living in Hawaii. And Amelia is one-and-a-half and there are no Zoom calls for her yet. Each of our kids learn from their older sibling. Amelia has an amazing perseverance and she wants to climb Sunset Cliffs like her brothers. I see different attributes developing in all four kids. And Brittany is doing great and doing a killer job managing all the kids. And she is helping manage me. She’s healthy and happy.”

Due to COVID-19 Pandemic health restrictions, the immediate future is a little cloudy for Jesse Smith, but long-term its bright. “The United States Olympic & Paralympic Committee (formerly the USOC) has been awesome with transparency and keeping us in the loop. We get a weekly briefing from them. The most important thing is for everyone to stay healthy and to do what they can to help each other, to focus on what we have in common. We want to compete in the Olympics. Away from the pool, I have spent the last three years on a path, finding out more about success in water polo and what makes me tick. In doing so, it has benefitted my water polo and I have found enjoyment in playing. I find tons of value being positive right now and very enthusiastic. I have made a commitment to be positive and trying to share that.”