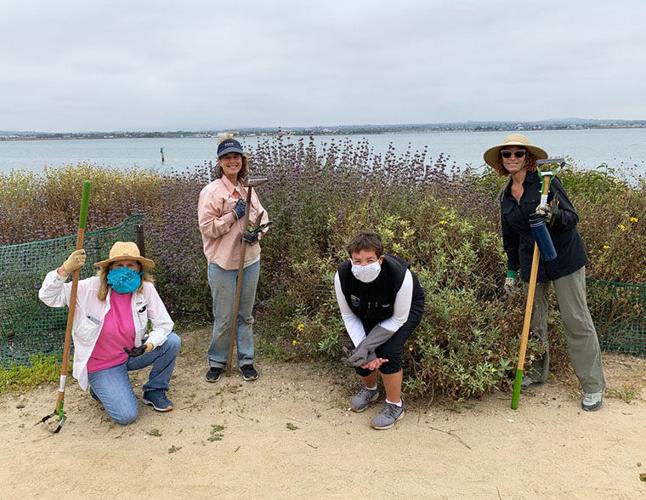 Volunteers dedicate their time for the upkeep of Grand Caribe Park Shoreline Park. Grand Caribe Shoreline Park in the Cays is a well loved park by both residents and visitors. With access to the bay, visitors sometimes make a day of it and bring the family, others just launch their paddle boards from its shore, while some walk their dogs and enjoy the plants and birds. 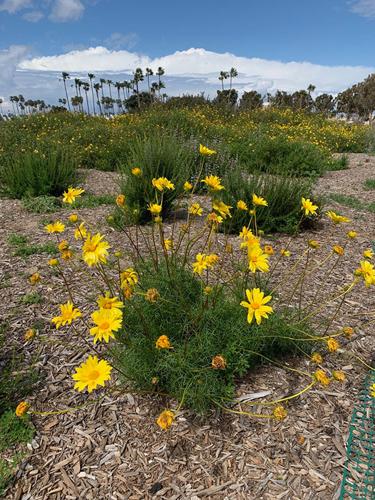 Volunteers dedicate their time for the upkeep of Grand Caribe Park Shoreline Park. Grand Caribe Shoreline Park in the Cays is a well loved park by both residents and visitors. With access to the bay, visitors sometimes make a day of it and bring the family, others just launch their paddle boards from its shore, while some walk their dogs and enjoy the plants and birds.

Grand Caribe Shoreline Park in the Cays is a well loved park by both residents and visitors. With access to the bay, visitors sometimes make a day of it and bring the family, others just launch their paddle boards from its shore, while some walk their dogs and enjoy the plants and birds. Bunnies that scurry around in the evenings can be enjoyed as they munch on the grass. The grassy area with a bronze sculpture called “Sheltering Wings” has become a place to stop to take family photos.

The park offers something for everyone. So it was a disappointment to many when it first closed after the lockdown. Although it reopened for a while, it was closed again due to its overuse.

Shoreline Park is part of the Port of San Diegos’ green necklace which provides access to the bay thanks to the many small parks scattered around. The Port administers Shoreline Park which is located on a man made island called Grand Caribe South. The park is a small portion of the island which serves mostly as a mitigation bank.

In 1994 a few residents including one Liza Butler, wanted to create a park on Grand Caribe South with native landscape.

With time it became an eyesore, explained Mary Berube, who is a Cays resident and master gardener. For the past few years, Berube has taken over some of the maintenance with the help of other volunteers.

“By 2016…I met people who surfed and loved the park,” she said. Berube connected with some of them and organized a party to commemorate the 20th anniversary of the park. As part of the anniversary, a UCSD professor, who works with the Audobon Society, did a lecture on the birds who visit the park, and a beach clean up was also held. But Berube wanted to do more.

“I got a grant from the Native Plant Society to do a restoration,” she said. Kim Tolles, another Cays resident who served as the Homeowners Association president and continues her work on the board, said the grant put Berube at the forefront of the restoration and was able to rally the community.

Berube speaks passionately of the park. “If you see it, you know you want to protect it,” she said. The park is part of the San Diego Bay National Wildlife Refuge. “We’ve amazing residents in South Bay…baby sharks, turtles… it’s a nursery for wildlife,” she said.

In 2017, with thanks for the help of a Girls Scout Troop from Otay Mesa and many other groups that became involved, a big restoration project was done. Berube explained that the California Native Plant Society helped with plant selection. The Port of San Diego was crucial with its assistance providing gardeners, doing clean up, working on the irrigation system and changing sprinklers’ heads. Plants like Cleveland Sage, Coast Buckwheat, Saltbush, and Lemonade Berry were planted.

As time went on more groups became involved in the restoration. Employees of Cummins Diesel Mechanics of El Cajon worked on the park as part of a service project. “They planted 200 plants and installed 40 cages with chicken wire to protect the plants,” said Berube.

Eighteen months ago the Port suggested the Audubon Society got involved on the park project and more progress was made. “The Port purchased the plants, about 600, eight working parties [came], about 300 volunteers for 3 or 4 hours at a time,” explained Berube.

Just before COVID lockdown Berube and other volunteers continued their endless maintenance of the park and had done a lot of weeding after the winter rains.

As a resident of the Cays, Brian Lippe, who passed away a few years ago, also loved the park and his wish was to see the park extend all the way to the Coronado Cays Yacht Club. Based on that idea, Berube and the other volunteers have gathered information to achieve that dream. The port’s current lease on Grand Caribe North, the island next to Shoreline Park, expires in 2030 and the group would like the Port to change its designation to recreation/open space so the park could be expanded.

Andrew Meyer, director of conservation of San Diego Audubon Society said that native plants like Laurel Sumac, Sage Brush and Goldenbush are better for birds, lizards, insects who are residents or for birds who migrate. “South Bay, San Diego Bay, Mission Bay are important for migratory birds who come from South America and Alaska. They fly along the coast and stop at Shoreline Park and love the native species,” he explained.

A survey was done to see the type of local birds that stop by the park which include the Brant Geese, Great Blue Herons and Egrets. Other more common birds include the Thrashers, Mockingbirds, Orioles, Kingfishers and Sparrows. There are also many shoreline and wading birds that frequent the park like the Sanderlings and the Godwits who use the beach at Shoreline Park for a week or so during the migration period. The Surf Scoter is yet another bird who is mostly black with some white and has a big bright orange bill.

“There are a lot of them during the migratory period in winter. They come from Alaska and the Arctic for the mild winter here,” said Meyer.

Meyer has been impressed with the work being done a the park. He also praised the community groups and individuals like Berube who volunteer their time.

“We had an awesome time working with the Port and Fish and Wildlife to maintain it, we’re making a dent in the small park and really making an improvement,” he said. Meyer explains that when new plants are placed in the soil they are watered for a period of time, but when they start growing and they can fend for themselves, they don’t need much water and the fences are removed.

Berube, who has received a community service award for the work on Grand Caribe Shoreline Park, noticed the change happening at the park in the past few months. She and the other volunteers saw many visitors using the park during the pandemic. Especially when the beach was closed, the park provided a place to enjoy the outdoors but the large number of people was worrisome.

The issue of overuse was not a problem until the pandemic hit, rules were not posted or enforced. “It’s a garden, you’re supposed to walk through it, it’s a tiny native garden,” she said.

Apart from the overuse there was the problem of sand erosion. “We were losing 5 feet of sand on the south end, and 2 to 3 feet along the shoreline on the bay side,” explained Berube.

The erosion, native plant damage and overuse worried the volunteers who communicated with the port.

“The Port’s solution was to close it,” said Berube. But the question remains on how to safely reopen it and preserve the park from further damage.