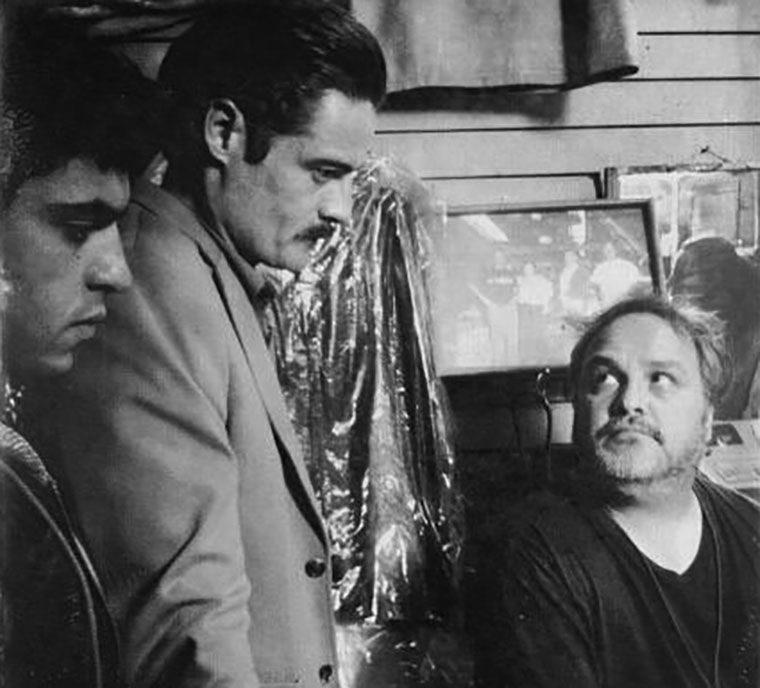 Joey Molina, far right, who grew up in Imperial Beach, co-wrote the screenplay of “Ruta Madre,” a film based on his adventure trip to Baja when he was a young man. He is pictured here in a scene of the film where he had a cameo appearance with actors David Castro, far left, and William Miller. 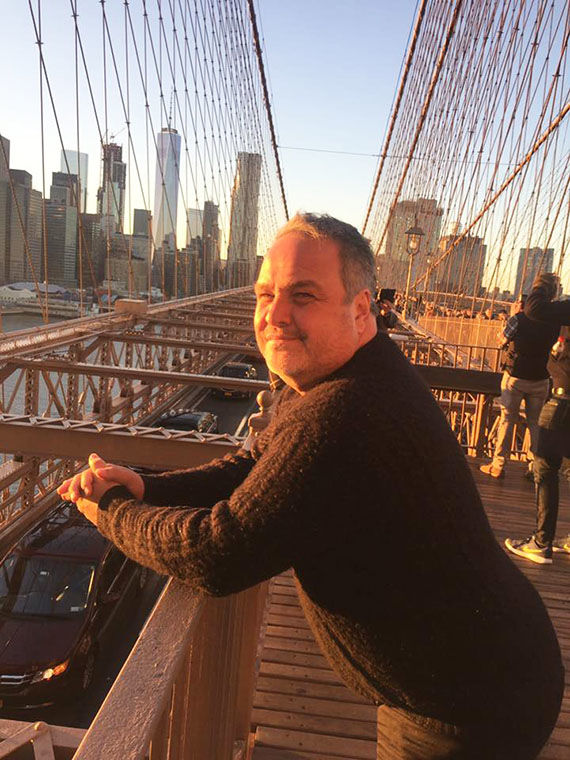 Joey Molina who grew up in Imperial Beach co-wrote the screenplay of “Ruta Madre” a film based on his adventure trip to Baja when he was a young man.

Joey Molina, far right, who grew up in Imperial Beach, co-wrote the screenplay of “Ruta Madre,” a film based on his adventure trip to Baja when he was a young man. He is pictured here in a scene of the film where he had a cameo appearance with actors David Castro, far left, and William Miller.

Joey Molina who grew up in Imperial Beach co-wrote the screenplay of “Ruta Madre” a film based on his adventure trip to Baja when he was a young man.

It’s the story of a young man who loves the girl next door but she ends up marrying someone else. To lift his spirits and help him discover his roots, his uncle takes him on a road trip down to Baja to the family ranch.

Joey Molina was that young man who lived in Imperial Beach and he never thought his road trip one day would be made into a film called “Ruta Madre.” As a winner of six awards at various film festival I expected “Ruta Madre” to be a good film. My expectations were exceeded after seeing the final cut of the film at the Coronado Village Theatre on July 13, a presentation by the Coronado Island Film Festival. The film has everything one can ask for - adventure, comedy, and drama - and not a dull moment in between, plus 10 original songs. This Baja road trip film has been described as a coming of age film with love, family and community in the mix.

This local story, based on the life of Molina, was partially filmed in Imperial Beach with scenes shot at the beach, pier and a local home. Molina has ties to the communities of Imperial Beach where he lived as well as Coronado where he had his first job at Vons.

Molina and friend Agustín Castañeda co-wrote the screenplay which was produced by Alpha.

Centauri Pictures, with assistance by Art in Motion International based in Coronado. “Ruta Madre” is an independent film that won Best Picture at the New York International Film Festival, the Heart Award for Best Feature Film and Audience Selection Award at the San Diego Film Festival, and Director’s Favorite among 1,000 films at the San Luis Obispo Film Festival. The film has been shown in cities throughout the U.S. including Cleveland, Pittsburgh and Tucson.

The cast features “Shadowhunters” David Castro who plays Molina, while Uncle Rodrigo is played by Spanish actor William Miller. A number of Mexican actresses including Angelica Maria and Carmen Salinas were cast as well. Ten original songs were written for this film including songs performed by Molina himself, who is a singer, and Ghino, a local singer who happened to attended the showing of the film at Village Theatre. Sophia Mickelson, daughter of golfer Phil Mickelson who played young Daisy and Jordi Bertran, Molina’s character as a young man, also were in attendance.

The idea of the movie came about after Molina shared bits and pieces of the road trip with Castañeda. One day while the duo was driving though the desert it was like a bolt of lightning. “Agustín says he was visited by the spirit of the desert. He said ‘I got it, the hippie girl story, love lost, life passage,’” recalled Molina.

Molina explained that the process of making the story into a movie was a journey in itself and took six years. After writing the script, Molina and Castañeda worked on finding the producing partners, the funding, and the actors. The filming took six weeks and was shot in Ensenada, Loreto and Santa Rosalia. In reality Molina and his uncle went down to Ciudad Constitución where the family ranch is located, a trip that took 48 hours.

“The first time I watched the screening I was feeling down, it wasn’t popping up,” said Molina. But then he received words of encouragement from Art in Motion International’s Ricardo Del Rio. “He told me even the $100 million movies are awful on the first cut. He’s an expert and it meant a lot,” he said.

Molina lived on Citrus Avenue in Imperial Beach and had a band studio on Elder Avenue. he grew up next door to a hippie girl named Daisy whom he loved and wanted to marry. He attended Southwestern College for two years, learning the basic fundamentals of singing. Molina received a scholarship to San Jose State University but after being there for a time, he felt it was not the right place for him, so he came back to Imperial Beach. “I had a band and we wanted to take over the world of rock and roll,” he said.

During Christmas break he connected with Daisy. “She told me ‘You need to go, you can’t stay here with me. You need to go be great.’ It broke my heart for years. But she gave me the inspiration to do something,” recalled Molina.

It was at this point that Molina’s uncle took him on the famous road trip in a red jeep which in the movie is portrayed by a red Corvair.

“The story is based on historical facts, true events, true people highly embellished and covered with a thin layer of fiction,” said Molina of the film. “I’m convinced someone in Baja will see the movie and say ‘that’s me’ [recognizing the events].”

The role played by comedian Paul Rodriguez was a real character, and that event actually happened during the trip. “The Federales made us take a stranger in the car with us,” he said.

The trip down to Baja made an impact for Molina. “I got to meet family members I had never met before. One of the scenes at the end is almost verbatim,” he recalled.

Molina learned of his great grandfather’s story and how his death affected the family. His grandfather, who was a successful farmer, left one acre of bare land to show the following generations how the land was before he started farming. “It was a very spiritual trip. It changed me for many reasons. I began to understand why I’m here,” said Molina.

Daisy, the girl next door, has watched the film and loved it. “She is a remarkable woman dedicated to her art and to her kids. She is still the same Daisy as when we were kids,” said Molina.

Molina calls himself a multi-dimensional singer, a rare breed who can sing from classical to gospel to rock and roll. As a professional singer he feels lucky he has been able to sing all over the world, including a solo performance at Carnegie Hall where he received a standing ovation. Molina has also performed at Sydney Opera House and Walt Disney Concert Hall among the venues which include many in San Diego.

His dream as a young man was to play with The Doors, a band he loved. One day, years ago a friend told him The Doors were getting back together and they were going to have a jam session. Molina drove to L.A.’s nightclub Whisky a Go Go where he was taken through a back door to a room where The Doors were playing. His dream of playing with his beloved band happened that night.

These days Molina works for the San Diego Opera as a teaching artist for inner city kids, training them in singing, acting, movement and writing. He is currently working on writing a book of his road trip by the same name as the film where he will be able to tell the whole story. These days Molina still has a cover band which he explains “takes care of the itch.”

Molina spoke a few words before the movie was shown. “After all these years, this couldn’t be a better fitting place to show the film. I had my first job at Vons in Coronado. I didn’t want to be a musician or a writer; I wanted to be a football player. My first football game was in Coronado. My footprints are here and in Imperial Beach. I remember watching Robin Williams in ‘Hook’ at this theatre… This is an independent film, a leap of faith, now you’re in the leap of faith with us,” he said.

After the showing of “Ruta Madre” a Q&A session was held with the producers, director and actors.

Although the film was just released to video on-demand, it is still available on the big screen at Digital Gym in North Park where it will play through July 18. The film will be shown in Tijuana and Ensenada, and at Harkins Theatres in Phoenix, Tucson, and Moreno Valley. It is still showing in Cleveland in four theaters.

“Ruta Madre” is a must see film with surprises at every turn which keeps the audience engaged and leaves you with a feeling of wanting to see more at the end. “Ruta Madre” also features beautiful Baja California scenery and is a movie you’ll want to see again and again.