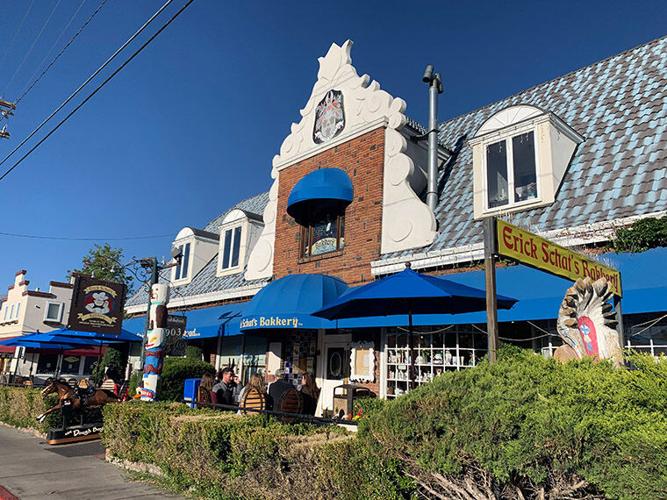 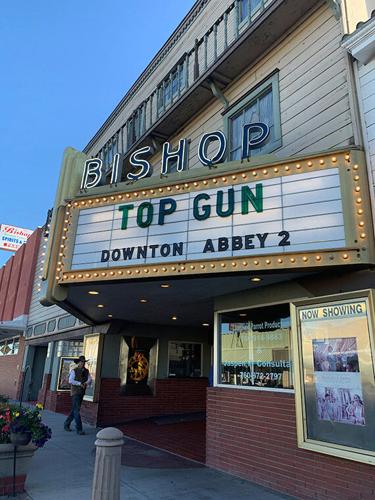 Top Gun at the Bishop Theatre. 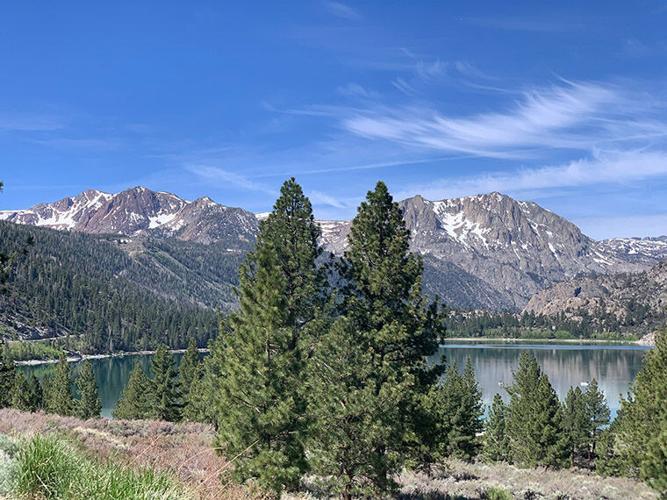 Top Gun at the Bishop Theatre.

Let’s head up Highway 395, where I once traveled on family vacations. I remember sitting in the back seat of our 1957 Chevy, with no AC; we used washcloths dipped in ice water to stay cool. North of the Mohave Desert, the highway hasn’t changed much, with mostly single-lane roads and light traffic to match. Here are some highlights along today’s Highway 395:

Lone Pine - I remember my dad pointing left toward the Sierras, saying, “Mt. Whitney, over 14,000 feet, is the highest point in the Continental United States. And (turning to his right) just 100 miles east is Death Valley, the lowest point in the United States.” I thought wow, then and I think, wow, now!

The boulder-strewn “Alabama Hills” behind Lone Pine have served for more than 100 years as a wonderful canvas for hundreds of Westerns and commercials filmed here. Hollywood, just 203 miles away, discovered the Alabama Hills in 1920 with the filming of the popular silent film “The Roundup” starring Fatty Arbuckle. John Wayne, Gary Cooper, Spencer Tracy, Roy Rogers, Jimmy Stewart and more stars made their way to the Alabama Hills. And many episodes of TV Westerns like “The Lone Ranger” and “Have Gun Will Travel” were filmed here. I learned more about this rich history at Lone Pine’s Museum of Western Film History, founded in 2006, right on the main highway.

Manzanar National Historic Site – In 1942, the U.S. government ordered Japanese American citizens and immigrants to leave their homes and be “detained” in 10 remote military-style camps. Manzanar, in Independence, just north of Lone Pine, preserves and interprets the legacy of Japanese Americans incarcerated here. The self-guided tour opened my eyes into a sad era of American life that I hope we never repeat. Guided tours are also available.

Bishop - Most travelers wouldn’t dream of passing up Erick Schat’s Bakkery, “Home of the Original Sheepherder Bread Since 1938.” The bread is great, but so is everything from pecan pull-apart loaves to éclairs to cherry turnovers.

But I made another happy discovery in Bishop – I wasn’t about to miss seeing Top Gun in its first week of release! I joined a full house of locals on a Wednesday night at the Bishop Theatre, now in its 98th year. Turns out that the fellow in the ticket booth was owner Larry Mullinix. Larry’s wife, Holly, first worked in the theatre’s concession stand while in high school, but the couple bought the theatre fairly recently. They had just completed an extensive remodel in 2020 when COVID hit. Larry credits the generosity of the town in helping them survive.

“We sold big bags of popcorn for $10 out front of the theatre three nights a week,” he said. “And I started renting out our marquee sign for $75 per side and people could post Happy Birthday or Happy Anniversary greetings. I never climbed up and down a ladder as much as I did during COVID!”

Larry was proud to say that the theatre, more than any site in the community, seems to be the defacto hometown gathering spot. Indeed, on the night I saw Top Gun, my seat neighbors were octogenarians who told me they went to the movies here at least once a month. They also were proud to have their names on theatre seat backs, another way the town helped fund the renovation. Larry gave me a book on the theater’s history, and I learned that Harry Holland, who had previously been a ventriloquist and puppeteer in traveling vaudeville, founded it. When his vaudeville troupe came to town and young Harry beheld the Owens Valley landscape and Bishop, he made the decision to set down roots.

The June Lake Loop - June Lake, Silver Lake and Grant Lake are 56 miles north of Bishop. There’s a small village in June Lake, should you wish to stop for a bite, and waterfalls were still trickling with water from Sierra snowpack high above.

Bodie State Historic Park - Here’s a fun stop if you’ve got kids along for the ride. Several of the shops have been left in a state of “arrested decay,” stocked as they were left when the town had a population of nearly 10,000.

Walker – This is the town where my family always stayed at the rustic Andruss Motel, owned by one of my dad’s LAPD buddies. In fact, I learned to swim in the motel’s pool. Not much has changed; the cabins are still knotty pine; the newly planted trees have grown tall and mighty, shading the median that separates the rows of cabins. The Walker General Store still has its original cabinetry. And you can still head out through the brush behind the motel to the trout-laden Walker River. Sadly for me but happily for those fish, I didn’t bring along a fishing pole.

Kris Grant’s “On the Road” column will run throughout the summer and into October, as she once again heads out to explore America!