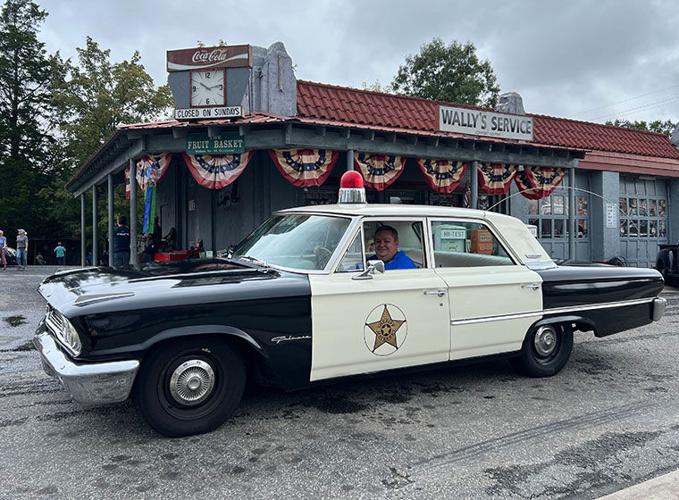 I went on a Squad Car tour of Mayberry (Mount Airy) in a 1963 Ford Galaxy, the same model that appeared in the 1963 year of the popular series. Ford always provided the latest models. 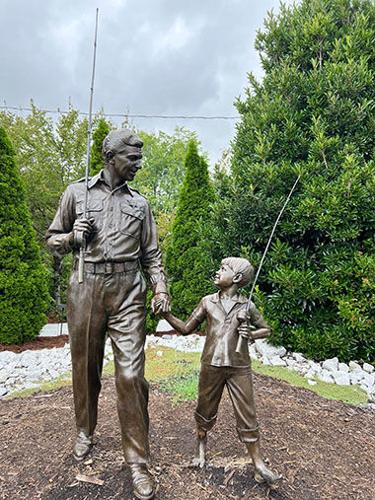 A statue of Andy and Opie, heading down to their favorite fishin’ hole, is located at the entrance to the Andy Griffith Museum.

I went on a Squad Car tour of Mayberry (Mount Airy) in a 1963 Ford Galaxy, the same model that appeared in the 1963 year of the popular series. Ford always provided the latest models.

A statue of Andy and Opie, heading down to their favorite fishin’ hole, is located at the entrance to the Andy Griffith Museum.

Coronado has often been dubbed “Mayberry by the Sea.” It’s a reference to the idyllic town portrayed in the Andy Griffith Show television series that ran from 1960 through 1968. If you want a healthy dollop of nostalgia, the show can still be found on TV and online with characters that are hilarious – I’m talking about you, Barney Fife – along with heartwarming life lessons.

I have just concluded a two-day stay in the Griffith’s hometown, Mount Airy, North Carolina, located about five miles south of Virginia in the foothills of the Blue Ridge Mountains. The town has embraced the actor in its historic district and the moniker of Mayberry. At its Andy Griffith Museum, you can chronicle Andy’s early years when he was president of the Mount Airy High School glee club, to his years at the University of North Carolina at Chapel Hill where he earned a music degree. Andy taught high school music for three years, performing on weekends at supper clubs with his first wife, Barbara Edwards, with singing, dancing and comedy sketches. His breakout comedic monologue, “What It Was, Was Football,” was commercially released in 1953 and propelled him to stardom. He performed on Broadway (“No Time for Sergeants”) and in movies, including “A Face in the Crowd” where he was directed by Elia Kazan and played opposite Patricia Neal. He then starred in the movie version of “No Time for Sergeants.” On both the Broadway and movie productions, Don Knotts costarred. He and Knotts went on to be regulars on the Steve Allen Show and when Andy made a guest appearance on Danny Thomas’s sitcom, “Make Room for Daddy,” as small town Mayor and Sheriff Andy Taylor, it led CBS to offer him his own sitcom.

Mount Airy’s historic district is lined with shops that dispense all manner of Mayberry goods from T-shirts and hoodies to coffee mugs and refrigerator magnets bearing the likenesses of Goober, Opie, Gomer Pyle, Aunt Bee, Barney and all the other memorable characters. The highway that runs through town is the Andy Griffith Highway. There are also authentic vestiges of Andy’s boyhood to be found in the town.

At the Snappy Lunch on Main Street, I ordered the signature pork chop sandwich “all in” with slaw, chili, mustard, onion and tomato for $5. (It’s like this town froze prices decades ago.) Young Andy frequented the restaurant, and in a 1960 episode of the series, Sheriff Andy Taylor and Deputy Barney Fife are thinking about grabbing a soda pop. “Let’s go down to the Snappy Lunch,” says Andy. The restaurant has been a staple on Mount Airy’s Main Street since 1923, and today the show’s fans continue to patronize the tiny eatery. Even Oprah stopped in!

Just across the street is the Earle Theatre. Andy and his parents use to patronize. On May 30, 1957 it hosted a special showing of “A Face in the Crowd” following a citywide “Andy Day” including a parade. Meanwhile, the town hosts Mayberry Days the last full week of September each year.

Andy Griffith once said that he favored place names that had a ring of authenticity, and so when you hear references in the show to driving over to “Mount Pilot,” there is actually a nearby town, Pilot Mountain, and the mountain itself is the highest point in North Carolina, rising a whopping 2,421 feet.

I went on a “Squad Car Tour” of Mount Airy, which left from Wally’s Service Station, where the gas tanks register 23 cents per gallon. Next door, there’s a replica of the Mayberry Sheriff’s office and jail cell, where Otis “slept it off” many a night.

My Squad Car tour guide, Mike Morand, told me he had been a fan of the Andy Griffith show since he was three years old. “Monday through Friday at 5:30, I’d watch the show with my mom and dad,” said the native of Raleigh. Like Opie, Mike was an only child and he doted on the show and visited Mount Airy so often that he developed friends in the community who urged him to move to the town. One day he got a call, “We’ve found you the perfect house,” they said. Turns out, it once belonged to Andy Griffith’s cousin and the family had a picture of young Andy sitting on the stone front porch steps.

Our tour included the water tower, which bears the silhouette of a man and a young boy holding fishing poles with the words “Mount Airy Welcomes You.” Of course, everyone knows those two characters are Andy and Opie (a young Ron Howard). A statue in front of the museum also commemorates that scene, which opened the show with its theme song whistling in the background.

There are plenty of rivers good for fishin’ around Mount Airy, but Mike shared a rare factoid with me. The opening scene of the series, where Andy and Opie are headed down to the river, was actually shot at Franklin Reservoir near Beverly Hills. He pulled out his cell phone and started flipping through photos, showing me the exact spot where the camera was positioned. He’s been there five times, he said, although these days there is less water in the reservoir, but it’s easily accessible to the general public, he advised.

Mike drove me by the Moravian Church in Mount Airy, where Andy and his family were members, and where Andy learned to play the trombone and other instruments. The church was across town from his home, now a bed and breakfast inn that can be rented through Hampton Inns by Hilton. Andy hoisted his trombone onto his bicycle to make the trek several days a week. When Andy first enrolled at the University of North Carolina at Chapel Hill, it was a pre-divinity student. But at UNC, he became involved in drama and musical theater, working summer stock at the “Lost Colony” on Roanoke Island, and graduated in 1949 with a degree in music. Andy met his first wife, Barbara Edwards at the Lost Colony. They had two children, Dixie, who often returns for the Mayberry Days celebrations, and Sam, a real estate developer who died in 1996. They divorced in 1972.

His second marriage lasted just five years. But in 1983, he married Cindi Knight, a former teacher and actress. The couple lived on a 68-acre ranch in Dare County, North Carolina; she was with him through his final years. Andy died on July 3, 2012.

I stayed at a darling Airbnb in Mount Airy, with a full kitchen and living room. The “Mayberry Apartment” is owned by Cathy and Freddie Quesinberry who earlier owned Opie’s Candy Store and the Uncorked Winery. The couple is now retired with five children and eight grandchildren, with Airbnb’s in Mount Airy and Myrtle Beach. Cathy’s maiden name was Folger and she was a cousin of Emmett Folger, Andy’s lifelong close friend. Andy gave a treasure trove of historical documents and memorabilia to Emmett, who passed them all on to the Andy Griffith Museum.

I also learned that the famous “Siamese twins,” Eng and Chang Bunker, born in Siam (now Thailand) in 1811, settled in Mount Airy in 1845, where they became successful farmers. They married two sisters. The two couples had 22 children!

Freddie Quesinberry grew up in Mount Airy. “We all played outside together; we roller-skated on sidewalks,” he said of his idyllic childhood. But even today, he says the natural proclivity of residents is to trust others, right from the start.

Cathy told me a couple other interesting facts about Mount Airy: Its nickname is “Granite City” because it has the largest open pit granite quarry in the world. And country singer-songwriter Donna Fargo is from Mount Airy. She sang the hit song, “I’m the happiest girl in the whole USA.”

Maybe that’s because she hails from Mount Airy.