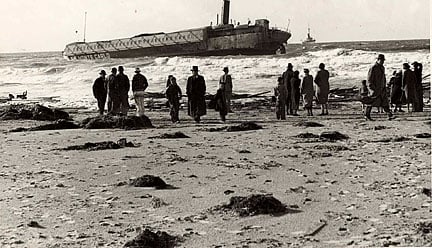 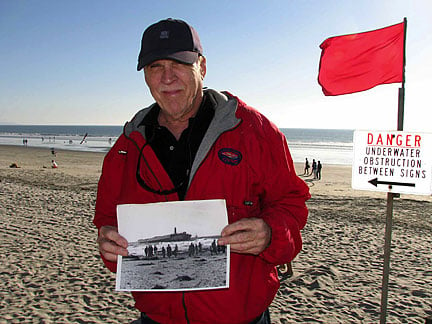 Steven Turner, grandson of the Monte Carlo’s owner, at the site of the famous shipwreck 77 years after the historic wreck. 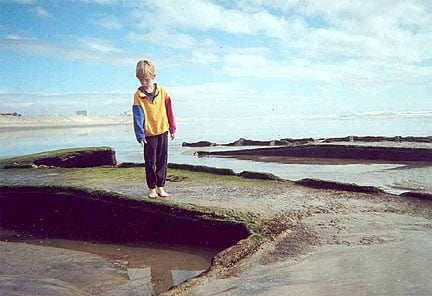 Ten years ago a series of storms had depleted sand on Coronado Beach enough to reveal massive sections of the shipwreck Monte Carlo. Seen here is 10-year-old Jack Aubrey, exploring the foreboding sight.

Steven Turner, grandson of the Monte Carlo’s owner, at the site of the famous shipwreck 77 years after the historic wreck.

Ten years ago a series of storms had depleted sand on Coronado Beach enough to reveal massive sections of the shipwreck Monte Carlo. Seen here is 10-year-old Jack Aubrey, exploring the foreboding sight.

On January 1, 1937, a 300-foot “sin ship” – the floating gambling casino Monte Carlo - crashed on Coronado’s south beach in a winter storm, creating a legend and a mystery that have defied time. Every preacher in the land had been praying for its demise; when the end came, every one of them took credit for it. What the law couldn’t do, God and Mother Nature did.

That day, and in subsequent years, the ownership of the Monte Carlo remained unknown. Hence, everything of value was stripped from the ship and surrounding beach by city officials, but the hull was left to rot in our surf line, where it remains. No one stepped forward to claim ownership, or to take responsibility for removing the old hulk.

On New Year’s Day this year, on the 77th anniversary of that shipwreck, the owner’s grandson arrived on the beach to see the remains of that ship, which was, apparently, a well-known “mystery” in his family too.

Stephen Turner and his wife Pam drove down from Newport Beach to see the wreck. Unfortunately, not enough winter storms had done their job, and the wreck remained obscured under tons of sand. Some years much of the ship’s outline can be seen – it’s dark and foreboding holds filled with water, and rusty rebar protruding up from the broken spine of the hull.

Turner has long had an interest in his family history, but what really kicked this into high gear was reading the 2011 book by Santa Monica historian, Ernest Marquez. The book is called, “Noir Afloat.” It chronicles the era of the gambling ships along the Pacific Coast and contains an entire chapter on the Monte Carlo.

From 1927-1939 as many as ten gambling ships dotted the coast between San Diego and Long Beach – ships named the Lux, the Rex, the Johanna Smith, the Rose Isle and the Monte Carlo.

Everything written to date about the Monte Carlo and that infamous shipwreck of 1937 has come from local newspaper articles at the time of the wreck, and a handful of interviews with people who had either visited the casino in International waters, or were on the beach when she died.

I’ve been fortunate to record interviews from Katherine Carlin of what it was like on board the Monte Carlo; from Bud Bernhard sharing tales of swimming to the wreck and retrieving hundreds of silver dollars; Bruce Muirhead’s remembrances of having to truck gambling paraphernalia from the beach for the City of Coronado, but keeping enough wood to build his pigeon coops.

There was Dick Kenney’s tale of woe as he and his brother drove their Model A on to the beach in the excitement of that New Year’s morning only to have their car fall victim to soft sand and an incoming tide; and perhaps the best one, Ralph Mitchell’s attempt to claim the ship under the Rule of Admiralty Law (as it pertains to abandoned ships) before she hit sand, only to be yelled off the ship by the caretakers.

Now, thanks to the work of author Ernest Marquez, the bigger picture is seen. It’s a tale of opportunistic, small time gangsters eager to make a buck. While the entire operation is traced to gangster, bootlegger and gambler Tony Cornero, the presence of Al Capone in Coronado at that time raises speculation that he either had a stake in the gambling ships, or wanted to.

To lure customers offshore, the operators offered free water taxi rides, a free drink, and even free dinner just to put guests in the mood to gamble. Orchestras played music while guests dined and gambled. Rooms were available as well. Few people came back without trying their luck. No one made money, except the owners of the ships and the syndicate that ruled them.

The Monte Carlo was built in 1921 at Wilmington, North Carolina, as a government-sponsored experiment in ship construction. She was built of concrete. She served two years in the U.S. Quartermaster Corps as Tanker No. 1. Then, in 1923 she was acquired by the Associated Oil Company of San Francisco and renamed the McKittrick. That work found her operating along the Pacific Coast for nearly a decade.

In 1932 she was sold and converted into a gambling ship and named Monte Carlo. At 300 feet she was the largest gambling ship in the fleet. In her prime she hosted 2,000 visitors a weekend, and 15,000 a week. This is estimated to have paid off syndicate owners to the tune of nearly $3 million a year from the floating casinos. This, keep in mind, all took place at the end of Prohibition and smack dab in the middle of the Great Depression.

Her grand opening took place May 7, 1932, in anticipation of the ‘32 Los Angeles Olympic Games, and the hope they would attract tens of thousands of people to gambling ship row. She was moored three miles offshore of Long Beach, with two other gambling ships of the fleet.

Billed as “the world’s greatest pleasure ship,” Monte Carlo was owned by Ed V. Turner and Marvin Schouweiler. It was Ed Turner’s grandson, Stephen Edward Turner, who found his way to Coronado January 1st in search of family history. He, it seems, learned more about his family from Marquez’ book than his family had ever known. And now we learn from both the book and from the Turner family some of the intricacies of this story that have eluded Coronadans for 77 years.

Games of chance on board the ship included dice tables, blackjack tables, roulette tables and wheels, chuck-a-luck and Chinese lottery, poker games and slot machines. And gambling on fights and horse racing took place through new wireless devices on board. Dice were either weighted or edged to increase the house odds, and were etched with the name of the ship.

Monte Carlo was towed from Long Beach to San Diego in 1936, and anchored three miles offshore. For eight months she operated with slightly less success than she had seen in Long Beach, despite visits from such Hollywood personalities as Clark Gable and Mae West. On November 1, after hosting a gala party on board, Monte Carlo closed for the winter.

On December 30 a storm began to punish the region. By the next night, 15-foot open-ocean swells battered the old ship and swept over her decks. Two caretakers were on board but helpless to do anything but hunker down and wait.

First the stern chain snapped. Then the bow chain. Monte Carlo was underway and at the mercy of wind and tide. By daylight New Year’s Day she ran aground adjacent to Tent City on south Coronado beach.

A Coast Guard cutter got close enough to launch a skiff, and the two caretakers precariously jumped from a Jacob’s ladder into the tiny skiff, timing their move so the rescue boat was on top of the swell.

Before long the upper deck had washed onto the beach, which was soon littered with roulette wheels, gambling tables and bottles of booze. Perhaps the greatest treasure to be found on the beach that day was the lumber – piles of first growth, long leaf Oregon fir – used to build the new upper deck dining room with mirrored ceilings. Residents hauled it away as quickly as possible, and a few house additions in Coronado benefited from it – a real prize during the Depression.

“We know my grandfather owned the ship,” said Turner, 65, a retired Real Estate developer, “but we don’t know whether he owned Monte Carlo at the time she was in San Diego.”

Turner’s father was president of Pacific Towboat and Salvage Co., based in Long Beach. That company, he said, was created from a fleet of water taxis the family inherited after Monte Carlo’s demise, as the gambling ship era drew to a close.

“We know my grandfather was entrepreneurial. He had experience in the ranching business and owned slaughterhouses. We know he owned a bottle shop, but we don’t know if he was in the rum running business or to what extent his involvements were with the syndicate.”

One of the stories Turner shared was his grandfather’s tale of how the Monte Carlo had wooden floors on the gambling deck. Coins would frequently fall on the floor, and disappear through cracks in the planking. Searching in the ship’s bilge, employees would routinely explore for gold and silver coins, which they would pocket. Turner’s grandfather discovered the mischief and had the gambling floor covered in linoleum.

Turner’s family has an old roulette wheel and a pair of dice engraved with the ship’s name – Monte Carlo. This is what perked their interest in researching more family history. They put the roulette wheel on eBay to see what, if any, reaction they would get.

Before long they were contacted by a gentleman who had dived all the shipwrecks and casinos along our coast, and had a bound book of newspaper articles about the ships. Another man owned the equipment that was used to make the dice for the floating casinos. And all of this led them to author and historian Ernest Marquez. The Turners elected to keep the roulette wheel, and now they are on a quest to find answers to many questions about their family history, which is what brought them to Coronado.

“I wanted to see what was left of the Monte Carlo,” said Turner. “My wife and I chose the lowest tide of the year, which coincidentally was the 77th anniversary of the wreck. Unfortunately, sand obscured the wreck. But we were thrilled to walk on that stretch of sand that now bears the name ‘Shipwreck Beach,’ and with the help of old photos and local historians, we were able to imagine what that day must have been like. Now we’re moving forward to fill in the rest of the pieces of our family history.”

One comment from the late Bud Bernhard still haunts treasure seekers. “I’m convinced there is $100,000 in gold and silver coins deep in that wreck,” said the man who retrieved hundreds of dollars from the shipwreck as a child. And when the wreck is visible, a small army of little old men with metal detectors can be seen pacing the sand in search of some of that lost treasure from the shipwreck Monte Carlo – a true piece of Coronado history.

I have heard about the mystery of shipwreck monte carlo but didn't know it in detaill and by this post i have got more information and Its true that at some situations where the law couldn't help that time the god and nature will do the best.