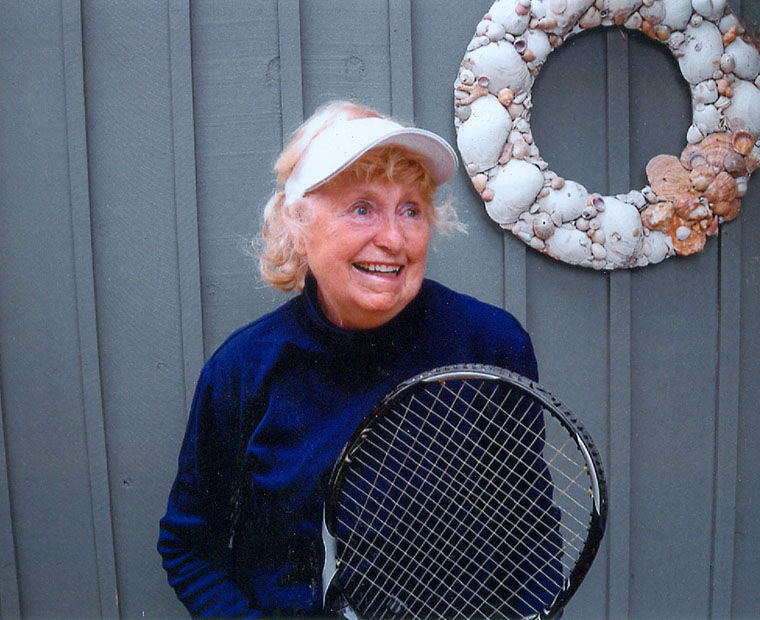 Julia Viera ready for the tennis courts at 91, taken in 2019. She still plays tennis today at 94. 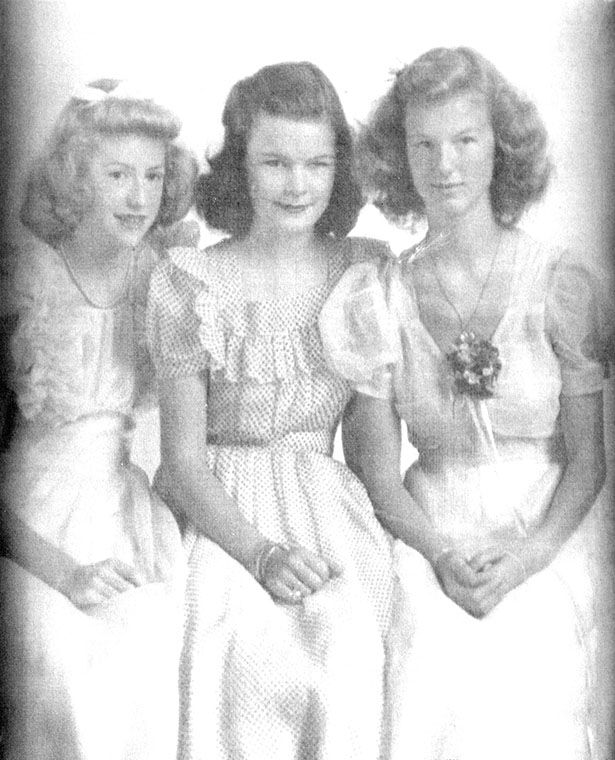 The three 14 year olds, Julia Yanquell (Viera), Molly McGowan, and Joanne Cross, worked to organize a high school dance that would be canceled due to the bombing of Pearl Harbor on Dec. 7, 1941. The photo was taken by Sidney Studios in Coronado and ran in the Coronado Journal.

Julia Viera ready for the tennis courts at 91, taken in 2019. She still plays tennis today at 94.

The three 14 year olds, Julia Yanquell (Viera), Molly McGowan, and Joanne Cross, worked to organize a high school dance that would be canceled due to the bombing of Pearl Harbor on Dec. 7, 1941. The photo was taken by Sidney Studios in Coronado and ran in the Coronado Journal.

Age may be just a number, but Julia Viera’s number, 94 years, sheds no light on her zest for life or her love of people. Her years are packed with good memories and plans to add more. It is a delight to be in her company and listen to her adventures, family stories, and Coronado history.

When Viera turned 90, she decided to do something wild to celebrate every Sept. 14 birthday. “[I] parachuted on [my] 90th birthday. It’s tandem. It’s worth doing once but not twice,” she said. For her 91st birthday, she rode down the Strand on the back of a motorcycle driven by one of her husband’s former officer friends who rode down from San Francisco. “The horrible part is the helmet; it’s awful. Lunch at the Hawaiian Big Kahuna in IB. The hard part was getting on and off.” For 92, she “flew in an open-air cockpit, a biplane that’s older than I am.” Last year her wild thing was a bit curtailed with Covid restrictions, so her tennis friends took her to lunch at Peohe’s. She said eating there without a mask was as wild as it got.

Viera commented on how society is different now from when she was young. “Well, night and day, actually. Women in the workplace, I think is the biggest thing. Working professionally after marriage…. I think that it’s interesting during these times when children aren’t going to school and mothers are at home that they’re complaining because they’re overworked, they don’t know what to do. Well, in our day there was a division. Daddy made the money; mommy ran things at home because running things at home was a big job. And still is. My (southern) mother said the first professional women were black women because they had to take care of their families, work, and have children.”

Other differences involved clothing. When her father’s ship was sunk, they were transferred to Oklahoma where she attended two years of high school on the campus of the University of Oklahoma (1942 - 43), “and that’s where I discovered blue jeans because the Oklahoma girls wore jeans…. We wore hats and gloves and high heels to get on an airplane. We wouldn’t have thought otherwise.”

That triggered a Coronado memory that happened in 1941. “I was here for my freshman year and the bombs dropped and that’s kind of an interesting story…. In 1941 in December, … three of us high school freshmen, we were hosting a Christmas dance at the officers’ club at North Island the Saturday after Dec 7, 1941.”

She showed me a picture of three young girls dressed in long gowns. “This is from the Eagle. Molly McGowen who died of cancer when we were 16, and this is Joanne Cross who is dead now. We were all 14 [in the photo]. … We would invite everybody from the high school, and then we would send invitations. We would say who would bring who, who the dates were…. We would have had a live orchestra … And of course, the party never happened.”

While Viera moved with her navy father, Charles Yanquell, she frequently returned to Coronado. “Coronado schools were so welcoming. I went in and out from the third grade on, in and out. Finally graduated here…. Our civilian friends were here, and they were welcoming us. I mean, we just walked right into class like we had never been gone. And I think these are outstanding schools.”

It served her well since her work history included writing a newspaper for the Naval Reserve at Treasure Island. She had worked for civil service at North Island as an employment interviewer, and “then when we went to San Francisco, it was easy to have a civil service job, so I was writing the newspaper….”

When her husband left on his fourth command to Vietnam, Viera decided she needed to be able to take care of their two girls if her husband did not make it. “I always wanted a real estate license, but my husband’s comment was, ‘you don’t need a job; you have a job. You’re the wife of a Navy commanding officer. That’s job enough for anybody.’” Upon reflection, she said, “And in our day, it was… They didn’t have all the family support systems we have now.”

However, she did get her real estate license at 40 years old and put her license in Lee Mather’s office. “The first year I made more than a captain in the Navy without even trying.” Her explanation: women “are better than men at residential real estate because it’s just taking care of people….

“When we moved back to Coronado in ‘79, I sat for the exam again, and then I bought 12 units in IB. The happiest day was when I sold them. I made a lot of money, but it was a lot of work.”

In each community Viera lived, she took an active role. Her resume includes various positions in San Francisco on Boards and Commissions as well as Citizen Legislative Aid. Her multiple honors list several Outstanding Citizen of the Year designations and Julia Viera Day in San Francisco in 2005.

She still enjoys an active life with a plethora of interests. “I feel so fortunate. I play tennis three times a week. …We kept playing during Covid. In fact, we moved to the base courts and took our civilian friends over there when the courts here were closed. These women…one of them is 81, one is 70, one is 50 and being close to their families and their children (keeps me going). I love other peoples’ children. I just feel so fortunate to have landed in this town, in this house, in this situation.”

An average day for Viera includes reading, writing letters to both the Coronado Eagle & Journal and the Union Tribune, writing articles for the Economist magazine, and being on the tennis courts by 8:30 a.m. “I read a lot, but I don’t like novels. I like the real deal…. I’ve read everything about what’s going on now. I’m interested in politics, very interested.”

She also writes a weekly article through prompts from StoryWorth which her granddaughter Louise Hoffman, who graduated from CHS, gave her. Viera has skipped only one prompt that involved magic, saying, “I don’t believe in magic.” After a year, her book will be published in a hardbound edition, and I hope to borrow it.

The latest prompt she received asked, “Do you have any famous ancestors?” Viera has ancestor stories to entertain any visitor. “My father (Yanquell) was a pioneer flight surgeon, one of the first, so his men were all the famous admirals of World War ll, and my husband was a SEAL Team commanding officer. Jack was a hybrid. He was a ship captain and a SEAL team captain, and took five commands to Vietnam, so we’ve been through it.”

Her husband, Jack Viera, “was a seventeen-year-old sailor in Pearl Harbor when the bombs dropped. [He] became the youngest chief in the navy. He was chief quarter master when he was 20, who turned down an opportunity to attend the Naval Academy because he didn’t want to miss the war.” He later regretted that decision.

Their courtship and marriage sound like a novel since he was enlisted, and she was the daughter of an officer. At that time, the relationship was not permitted. She first saw him in San Francisco when she was writing the newspaper for the Naval Reserve. She visited a yacht with a friend who told her, “’There’s a chief on this boat that’s like no chief we’ve ever seen. And there he was, looking like Flash Gordon….”

They transferred him away from her to Coronado where he became a SEAL. Then he got out of the Navy and got his Merchant Marine license so they could get married. Later he returned to the Navy.

She referred to her husband as a “star” because he never graduated from high school yet became a decorated officer in the Navy with multiple commands and retired as a commander. One of her interesting stories about him involved advice from her father. “This is how you deal with a type A male. ‘My father said not to bug you about smoking because it’s impossible. It’s impossible for you to stop.’ And he stopped.” She laughed as she said he had smoked since he was 13.

When asked what was the best thing that ever happened to her, without hesitation she said, “Marrying Jack here and then having our daughter (Ann). No question.” Marrying Jack gave her a step-daughter Jan, who was six years old at the time and lived with them. Jan now owns and manages 3000 acres of corn and soy beans in Illinois and has three children: Ann, Mike, and John. Ann is a retired librarian from the Veterinarian School of the University of Tennessee and has one daughter Louise.

Her quick reply to questions about completing her bucket list: “Nothing. I’ve been everywhere.” However, after a slight pause, she added, “I really do want to go to Hawaii and visit the kids there because we were in and out of Hawaii for 20 years. I belonged to the Hawaii Yacht Club for 40 years…. We went on our 40th wedding anniversary in the 80s. Tomorrow I will have been married 68 years, but I lost Jack to cancer (in 2001).”

She may have lived a transient lifestyle in childhood and after marriage, moving 36 times with her Merchant Marine and Navy husband, but she made the permanent move to Coronado in 2005. Her childhood home recently received historical designation, and it is decorated with pictures of great-grandparents, parents, her immediate family, and friends as well as furnishings from them. Viera may enjoy pointing to pictures or china and relating tales of her past, but she enjoys living in the present.

Viera closed our interview with advice for staying young, although she said, “I don’t know if you can stay young because when you’re 94, you’re 94.” Her advice, however, must work for her. “When you’re old and you have a chance to interact with young children, it’s the most wonderful thing. And to be close to the children of your best friends, and I am close to the grown children and the young children, and the Marsh family (neighbors) have three boys…and I’m a grandmother to them because they don’t have a grandmother…. To have young people around you who enjoy being around you, that’s the best.”