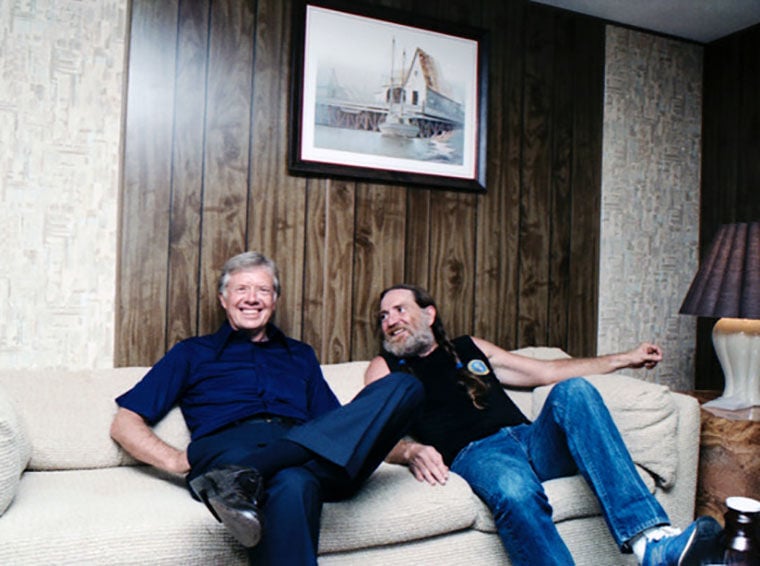 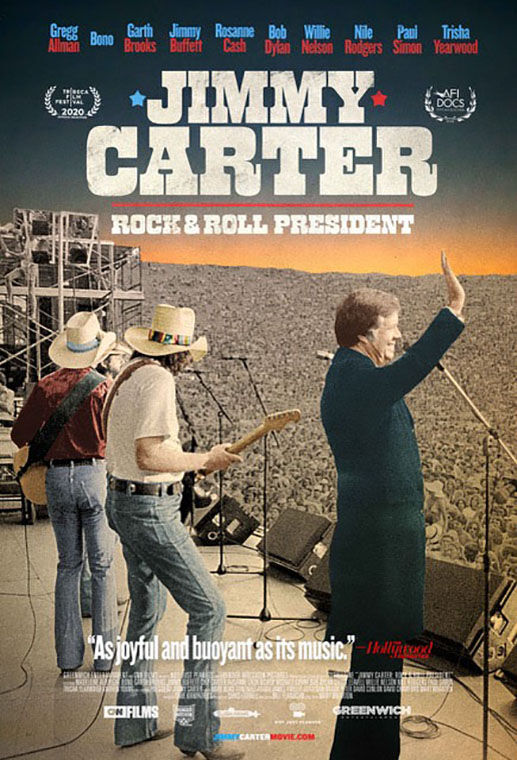 I’ve never had more faith in America than I do today. We have an America that, in Bob Dylan’s phrase, is “Busy being born, not busy dying.”

Right in step with this oh, so hot ‘n heavy political climate, Coronado Island Film Festival is offering the brilliant new feature length documentary, “Jimmy Carter, Rock & Roll President” as its September Virtual Cinema selection. The film, currently playing in theatres, is not available on any of the online streaming platforms but is available to you at home, thanks to CIFF’s partnership with Greenwich Entertainment. Go to www.coronadoislandfilmfest.com and click on Virtual Cinema to “unlock” the film for a three-day rental. If you just watched “Desert One,” our August Virtual Cinema film (and still available to watch) this film offers a very different perspective to the personality and man in the White House.

A portion of the affordable rental fee will go to support CIFF.

In this film, directed by Mary Wharton, we meet a whole different Jimmy Carter from the man we thought we knew. Here is, of course, the 39th President of the United States and the 2002 winner of the Nobel Peace Prize, but we also come to know a life-long lover of music of every kind, a man filled with good humor, compassion, love of family and his hometown of Plains, Georgia, and a true-blue friend to musicians like Willie Nelson, Bob Dylan, Gregg Allman, Paul Simon, Bono and Garth Brooks, all of whom helped him get elected and were frequent guests in the Carter White House. They’re all interviewed in the film, along with Roseanne Cash, Madeline Albright and many others.

Watching these musical icons of the ’70s perform is a trip back to a time that will make you feel like a kid again. Aretha Franklin’s “God Bless America,” performed at Carter’s 1977 Inauguration, just might drop you to your knees.

Carter, now 95, recalls that during the most trying times of his White House years (i.e. the Iran hostage crisis, the sky-high interest rates, the long lines during the gasoline shortage, etc.), he would go off to a room by himself and listen to his Willie Nelson records to help him clear his mind. He would bristle when an advisor would tell him that something was “not good for him politically.” He didn’t care about that. He always asked, “But what is the right thing to do?”

During one of his visits to the White House, Willie Nelson confessed to the president that he’d smoked pot in his bedroom the night before with “a member of the household staff.” Carter tells us with a twinkle in his eyes that it turned out that the “household staff” member was one of the Carter sons. Nelson didn’t want to get him in trouble.

Director Mary Wharton says, “At the time he ran for president, Carter was in his early fifties, and by most standards of the time was considered an ‘older person’ and maybe even a bit of a square from a small southern town. But in so many clips from the time, you see Carter looking youthful and energetic, with an incredible vigor, and Rosalynn is so beautiful. The two of them together have a ‘New Camelot’ feel during his years as president, 1977-81.” It was a non-partisan magnetism that attracted artists and musicians, just as he was drawn to them.

Producer Chris Farrell says, “We’ve all been fed the line that Bill Clinton was the first ‘rock president’ because he played the saxophone on ‘The Arsenio Hall Show,’ but Jimmy Carter was the real deal. He didn’t do it for show and it wasn’t done for political reasons. It’s who Jimmy Carter was – and it pre-dated his arrival in the White House!”

One of the many fun scenes is the Carters’ first dinner party at the White House, where musician Gregg Allman and his then-wife Cher were guests. We see the bewildered looks on everyone’s faces as something new is introduced at the table: the finger bowl. No one knew what to do. Some of the guests reportedly drank it.

“I didn’t want the film to be simply about nostalgia,” says Wharton. “I wanted it to help us all remember what this country stands for, what we’ve always stood for. And to note now, in the moment we’re in now, how we should stand for that again. I wanted it to feel hopeful, and to highlight how important it is to see the best of America – and Jimmy Carter is absolutely that.”

And while you’re at your computer, we ask you to cast your vote for CIFF as Best Film Festival! This is the annual Best of San Diego contest sponsored by the San Diego Reader, and we’re already in the top five! Go to bestofsandiegoreader.com and click on “Start Voting.” Voting closes Sept. 21, so don’t delay. We can win this!

Meantime, we wish the community good health and good cheer as we continue to navigate together this life during COVID-19. Mask up, Coronado, and please keep supporting our local restaurants and businesses; they need us and we need them.

Doug St. Denis is the founder and chairman of Coronado Island Film Festival and can be reached at doug@coronadofilm.com