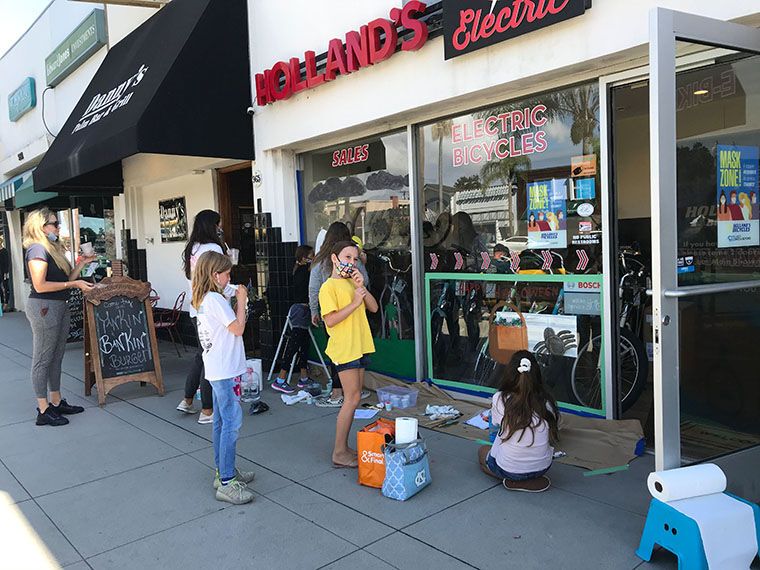 Despite students not being physically at schools where submission sheets would normally be available, this year saw an incredible amount of participants according to CJWC member and this year’s Window Painting organizer, Lauren Holman. “We had 90 kids enter this year which is almost double the amount we had last year." 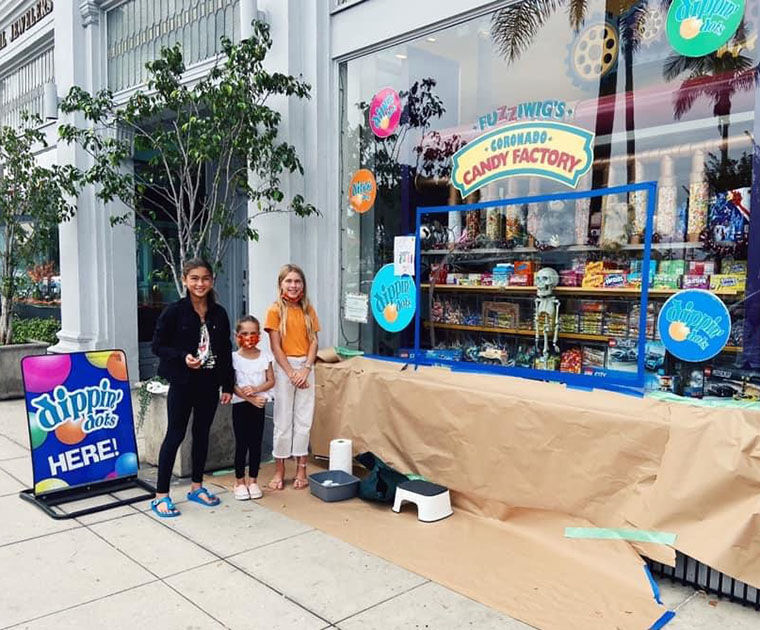 This past Sunday kids took to the sidewalks of Coronado, masked and armed with brushes and paints, to liven up the island with color and creativity. From sugar skulls and ghosts to surfing witches and grim study sessions, windows across businesses in Coronado are sporting the spooky spirit of the town’s youth for all to enjoy!

Despite students not being physically at schools where submission sheets would normally be available, this year saw an incredible amount of participants according to CJWC member and this year’s Window Painting organizer, Lauren Holman. “We had 90 kids enter this year which is almost double the amount we had last year."

This past Sunday kids took to the sidewalks of Coronado, masked and armed with brushes and paints, to liven up the island with color and creativity. From sugar skulls and ghosts to surfing witches and grim study sessions, windows across businesses in Coronado are sporting the spooky spirit of the town’s youth for all to enjoy!

Though this year may have changed our usual October and Halloween plans, one thing that has remained the same is the long-standing annual tradition of the Halloween Window Painting organized and sponsored by the Coronado Junior Woman’s Club (CJWC). This past Sunday kids took to the sidewalks of Coronado, masked and armed with brushes and paints, to liven up the island with color and creativity. From sugar skulls and ghosts to surfing witches and grim study sessions, windows across businesses in Coronado are sporting the spooky spirit of the town’s youth for all to enjoy!

Despite students not being physically at schools where submission sheets would normally be available, this year saw an incredible amount of participants according to CJWC member and this year’s Window Painting organizer, Lauren Holman. “We had 90 kids enter this year which is almost double the amount we had last year,” Holman tells me as she gets ready to check another group in during the event last Sunday. “I took over [the event] just last year…but I found old notes dated 1981, so it’s been an event in Coronado at least 39 years,” Holman tells me.

“Responses are typically enthusiastic and supportive from the locally owned businesses on Orange Ave. Kids definitely get creative and put forth their best artistic effort. They have a lot of fun painting a surface they typically aren’t allowed to, and are excited knowing that the entire town will be viewing their art.” This year Holman and the CJWC staggered check in times for groups to avoid crowding and maintain social distancing for participants. “CJWC cares about keeping Coronado traditions alive and has committed to making window painting happen for the kids of Coronado.”

While there were a fair amount of experienced window painters out and about on Sunday who were decorating windows with their designs for their second or third time, many were experiencing the event for the first time as well. I caught up with some painters including 9 year old Diego and 8 year old Lucero, bringing their Halloween visions to life along Orange Avenue for the first time. “I like that everybody will see it,” Diego said, while Lucero mentions the collaborative family effort of her design.

A nearby trio, Leo, Mack, and Cal were painting a huge skull on their window. “Leo came up with the design,” they tell me, “and we figured it was Halloween but not too scary so that’s why we’re doing a sugar skull.”

First timers Susan and Eleanor are working on scene complete with ghosts, a pumpkin, witch, spider, and more. “We worked together on [the design],” the two recall. “We met together in the backyard and we brainstormed the ‘Happy Halloween’ with the ghosts around it, then the pumpkin and everything else. It’s just fun, we get to paint!”

Another trio, Jersey (10), Lucy (11), and Cambria (10), getting a hand from older sister Savanna (13), have participated a few times, always basing their design on a movie or television show befitting the season each year. “We’ve done ‘The Nightmare Before Christmas’ and ‘Stranger Things,’” they say, but their favorite part? “We get to see each other and show our creativity for everyone to see.”

Over at Emerald City Leo, Beau, and Jack aren’t new to the event either. “We’ve all done it before,” they mention (their set up and nearly finished window attests to the fact that they know what they’re doing), “and we like painting in different locations each year, creating art, and showing the community.”

Neighbors and friends Rylan (11) and Allison (9) were painting a ghost further down the street, popping in to ask the store owner about his knowledge of the Pac Man ghosts as I approached. “We didn’t know what to do with the ghost so we thought maybe a Pac Man theme,” Rylan says. Allison adds, “We sort of did everything…a pumpkin patch, a house, a graveyard.” Together what they like most is seeing all of their friends, getting to customize windows, and everyone in town walking by and enjoying their window.

Ainsley (9), Adella (9), and Anika (8) worked together to bring their vision of Halloween messages for a safe and happy holiday to life. Each had a favorite part they loved painting the most – the moon, the stars, and the witch – befitting of their costumes this year, a wolf, an angel, and a witch.

A few windows I passed had taken on a distinctly Coronado vibe with depictions of waves and surfing, palm trees, sunglasses, and the Hotel Del. Michaela and Anastasia, both 9, feature a surfing witch on their window. “We thought, it’s Coronado and the beach is right there so instead of a witch riding a broom, we should do a witch riding a wave.”

Perhaps the scariest window to be seen will be Gianna (11) and Séléna’s (10) work, with support from little sister Pietra (6), depicting a grim study scene of an overworked student surrounded by colorful reapers telling the student to study, study, study. “Séléna came up with the study part,” Gianna tells me. “A study session is every kid’s nightmare,” Séléna adds, “and we thought the reapers would be funny and [we] just kept adding on.”

A few comments began to stand out as crowd favorites from those participating; getting to paint, knowing their work will be seen and enjoyed, and getting to see friends. An added bonus were free treats being shared from some of the local shops and the candy bags handed out by the CJWC at check in (some things never change).

As I walked around Orange Avenue and Tent City on Sunday, it became clear how beloved a tradition this event is. Parents were having just as much fun seeing their kids enjoy some Halloween festivities and remembering their own experiences with the event when they were younger. “I can distinctly remember painting the window at the dry cleaners on Tenth Street and driving by it every day with pride,” Katy Bennett tells me with a smile. “It’s been a tradition for so long!”

Both Bennett and Carrie Cellos love that the event is giving their kids some normalcy this season and the joy it brings to them. “I think it boosts self-esteem,” Cellos says. “They enter their art submissions and that gives that sense of, ‘oh, mine got picked!’”

Cellos, who’s been supervising her boys, sees the way it helps the shops as well. “[The event] probably helps stores, too. We’ve seen so many people walking in the shop here since they started painting. With the kids painting, it’s endearing.” She also adds how she appreciates the event giving kids a fun activity to do, “Especially boys,” she said with a laugh, “it’s keeping those hands busy!”

While talking to kids and their parents on Sunday, there was a real sense of excitement and delight brought on by the CJWC’s event. Despite COVID-19 changing traditional plans, most kids I spoke with are still happy to be dressing up and looking forward to celebrating Halloween, even if it may be at home with family. There seems to be some consensus that any trick-or-treating that is happening will be small-scale, where neighbors will have gift bags of candy out or delivering to each other to maintain safe practices right now, or doing the Trick-or-Treat drive-thru in town. And even if it’s less of a public affair this year, with mentions of costumes of a 50s theme family, Star Wars characters, zombies, Disney villains, and more, rest assured that the Halloween spirit will still be strong in Coronado this year.