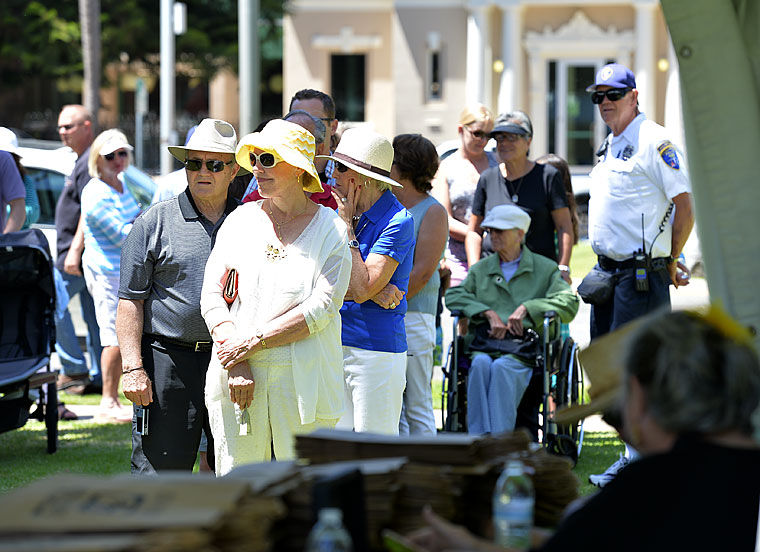 Visitors to the Coronado Flower SHow lined up early to get inside and view the floral spectacular. 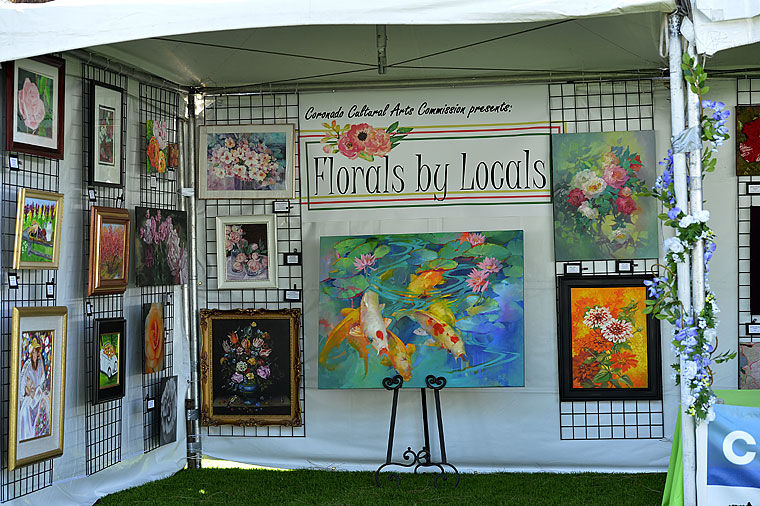 “Florals by Locals,” 40 works of art with a floral theme, provided by 24 local artists, was a new attraction at this year’s Coronado Flower Show. 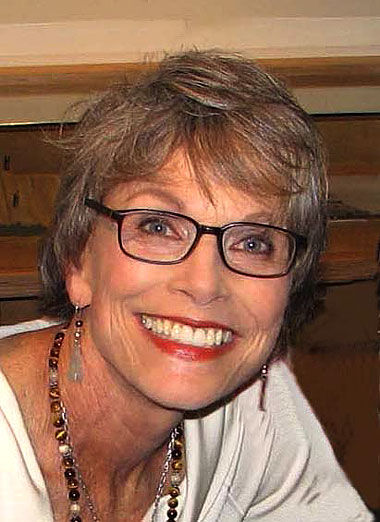 Doug St. Denis came up with the concept of Florals by Locals and participated with one of her still life paintings. She has been involved with the Arts in Coronado and has been a painter for more than 50 years.

Visitors to the Coronado Flower SHow lined up early to get inside and view the floral spectacular.

“Florals by Locals,” 40 works of art with a floral theme, provided by 24 local artists, was a new attraction at this year’s Coronado Flower Show.

Doug St. Denis came up with the concept of Florals by Locals and participated with one of her still life paintings. She has been involved with the Arts in Coronado and has been a painter for more than 50 years.

Long time artist, actress and community servant Doug St. Denis had an idea last year. What if we had a special entry at the 2015 Coronado Flower Show to highlight first-time artists, artists from Coronado who typically don’t own a large body of work? And require all participating works of art to have a floral theme?

The seed was planted. This past week it grew into fruition in the form of “Florals by Locals.” Surrounded by real flowers, 40 works of art with a floral theme, provided by 24 local artists, attracted a surprisingly large audience.

St. Denis is the former Cultural Arts Commissioner and chaired the Visual Arts & Film program. Despite dealing with personal tragedies in her life (her husband Dale suffered a stroke last year, and her son Larry contracted near-fatal West Nile Virus), she soldiered on as best she could.

Late last year St. Denis resigned from the Cultural Arts Commission to allow her more time for family needs. Good ideas, however, like seeds, can’t be stopped once they take root.

“Doug went off the commission in early November,” said Kelly Purvis, Arts Administrator for the City of Coronado. “But by that time she had done a terrific job of sketching out this event. Local educator Amy Stewart was on board in January, and between the two of them, the event began to take shape, we had approval from the Floral Association, and we decided to proceed.

“I called Doug and told her we have had a really great reception but needed her involvement to make a forum,” said Purvis. “She wanted so badly to be involved, but didn’t have time to create a new painting. So she called up her best friend, Dodo Reid-Stanley, and borrowed back a painting she had done in 1971. It was such a long time ago that it still had her former name on it – Doug Baldauf.”

The Coronado Cultural Arts Commission did a Call to Artists and publicized it in the newspaper, as well as on the Coronado Arts website. Slowly a list of artists began to grow who were then invited to participate.

Most of the artists at Florals by Locals offered their paintings for sale, but not during the Flower Show. All the artwork was of a floral topic, or an interpretation of floral. Patty Jepson, for example, utilized a mixed medium of watercolors and acrylics to create a silver fish holding a rose in its mouth.

“These paintings are all created by local artists who live, work or own property in Coronado,” said Purvis. “There was a small $15 fee to cover expenses. The work was not juried, and artists provided us with up to three pieces of art for our display.”

Local artist Tina Christiansen was extremely helpful in bringing Florals by Locals to life; as was gallery owner Dan McGeorge, who provided a professional grid system to hang or display the paintings.

“Work began to arrive about a week ago,” said Purvis. “On Friday we had two tents, but the Flower Show saw what we had and offered us a third tent. It’s been just wonderful.”

Although there was no judging - no blue ribbons dangling from frames - hundreds of people visiting the Florals by Locals booth were not shy about their reactions and could be found throughout the weekend huddling around their favorites.

One of those favorites was a watercolor giclee by Judy Dennis called, “Roses in Another Language.” In it, brightly colored roses were cut and gathered, and wrapped in a foreign language newspaper. “Simply stunning,” one woman exclaimed as she studied it.

Another favorite was an oil painting by Glory Palecek of a white VW convertible filled with brightly colored flowers. Coronado artist Tina Christiansen had two of her own works on display – Watercolor on Board and Watercolor Silk Scarf.

Among the artists were first-timers as well as veterans of the craft. Just a few of the artists included Mary Hale, Anne Lanman, Dixie McCarthy, Pat Pilcher, Susan Stone and Carol Young. Two local teachers participated – Anna Woerman and Karrie Jackson, representing the Coronado School of the Arts.

Belle Mitchell, an island photographer, gathered information from Purvis. “I can’t wait to be part of this next year,” said Mitchell. “Since my kids were little, I’ve been coming to the Flower Show. We would come at 4 p.m. on the last day and buy as many of the flowers as we could, and then stage floral-themed photo shoots with my kids. I have shots of them holding huge armfuls of flowers over the past 15 years. They’re just precious, and I would love to display them here next year.”

The Coronado Cultural Arts Commission is extremely active in developing art programs, building partnerships and community alliances, and in introducing creative initiatives to further awareness of the cultural arts.

The group was established in 2011 and is comprised of several volunteer commissioners covering a variety of program areas - Arts Education, Arts Partners and Advocacy, Communication, Public Relations and Media, Special Events and Development, Literary Arts, Public Art, and Visual Arts and Film.

“I would love to see us expand next year,” said Purvis. “It’s just a matter of space and manpower. We hope to have an entirely new collection of visual imagery for 2016, continuing to celebrate the floral theme. By introducing artists to more artists, we’ll be seeing fresh work hanging, and we’ll recognize more hidden talent throughout our art community here in Coronado.”

For more information on the Coronado Cultural Arts Commission visit them at www.coronadoarts.com.