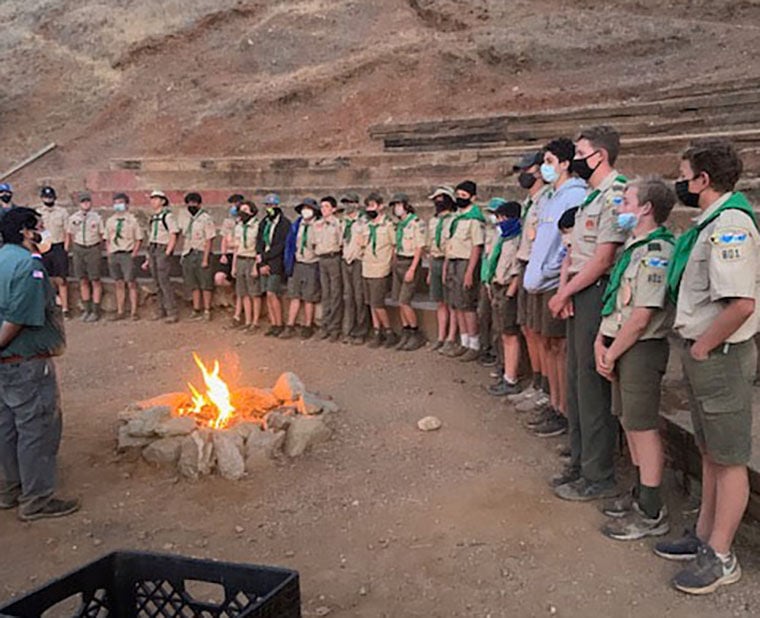 Boy Scout Troop 801 gathers around the campfire on one of their many adventures. For any families looking to learn more and get involved with the Boy Scouts and Troop 801, visit their website at http://www.troop801coronado.org or reach out to Scoutmaster Steve Turo directly via email at stturo@gmail.com. 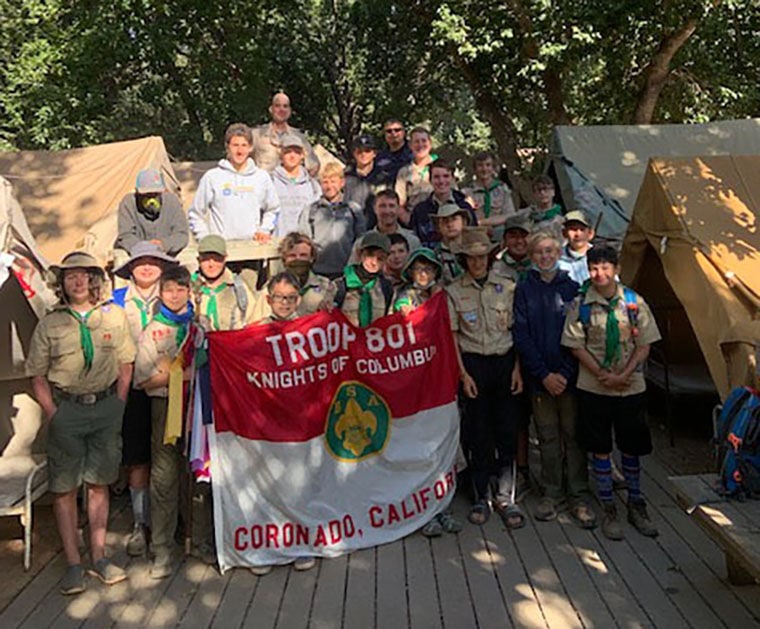 Boy Scout Troop 801 gathers around the campfire on one of their many adventures. For any families looking to learn more and get involved with the Boy Scouts and Troop 801, visit their website at http://www.troop801coronado.org or reach out to Scoutmaster Steve Turo directly via email at stturo@gmail.com.

Coronado is home to a robust Boy Scout troop, Troop 801, which has been a part of the community for over five decades. As a service-oriented program that allows Scouts to explore a wide-variety of interests and activities in a community with a large military presence, many boys and young men have been able to find a home in Troop 801 – whether they’re new to Coronado, returning, or permanent residents.

Steve Turo, Scoutmaster for the local troop, knows this well having been involved in Boy Scouts programs with his family while stationed with the Navy in Guam and Florida before moving to Coronado. “Lots of military families are looking for a troop when they get here,” Turo explained. “I think six of the last eight boys to join [Troop 801] are of that background.” When Turo arrived in Coronado, he and his wife had been talking about finding a troop for their youngest son when their orthodontist, Dr. Mullins, introduced them to Troop 801, being heavily involved with the troop at that time.

“We are longtime Scouters. Our older son is a junior in college and an Eagle Scout, so we’ve been doing this for a long time and had just moved here from Pensacola, Florida,” he recounted. “I’ve been a leader for a long time in several troops; we were in Guam overseas for many years and were involved there, then in Pensacola continued our adventure there and now we’re here.” Turo didn’t grow up as a Scout but was introduced to it by his wife, Tammy (who is also a troop leader), and her family.Turo took over as troop leader just before the pandemic hit which, of course, made for some unusual circumstances in the beginning as the Boy Scouts of America figured out guidelines for troops across the country. “The Council came out (every troop is connected to a council, ours is the San Diego Imperial Council) with the protocol we needed to safely conduct meetings and we were able to do that through collaborating with the school district and use their lit parking lot on Sixth Street to meet all the council protocols,” he mentioned as he explained that Zoom turned out to not be as conducive for their group. “So we did continue to meet and move forward – not as efficiently as we were used to, but we were still able to get the program moving forward, kept kids engaged, and now we’re poised to take off like a rocket as we move back to normality. We’re able to go camping and hiking – all the fun stuff they like to do – and we’re really set up for success,” he added. “All the extra work adult helpers did pay off.”

When it comes to activities, Troop 801 is no stranger to the outdoors. They were still able to plan a trip to the desert last year around Octotillo Wells to camp and to hike a railroad trestle, as well as a recent foray to Catalina Island, and a week-long camp at Silver Strand State Park last month. “We do love the camping and it’s a lot of fun watching the boys grow and develop their skills,” Turo said. “When we come together as a troop we get to break those cliques from school up a bit, and it’s really amazing to see those relationships start to develop, and especially seeing the quiet or shy ones break loose, get comfortable and come out of their shells and become a part of something.” The troop has upcoming adventures planned at the Pacific Southwest Railway Museum in Campo, a “Nightmare Before Christmas” themed camp out in Mataguay, and a camping trip in Joshua Tree National Park.

The Scouts are also largely in charge of creating their schedule for the year when it comes to planning their activities and outings. “We do an annual meeting where they’ll sit down and spitball ideas and create a calendar and we, as the adults, just make sure their plans are realistic and achievable, that there won’t be burnout, and then help give them the tools to let that succeed,” Turo explained. “Of course we do all kinds of community service, as well. We have a coastal cleanup coming up and a lot of the boys have to earn a certain amount of service hours to move to the next [scout] rank, so they’re always looking for opportunities to help out.”

When asked for one of his favorite memories from his time as a troop leader, Turo immediately recalled an experience his troop had in Guam when they had to opportunity to fly to one of the neighboring islands, Rota. “The government of Rota was interested in starting a scouting program and invited us to camp out and introduce ourselves,” he said. “They gave us a bus to go around the island, and it was incredible to see the different areas, to stop and get to know the history of the island and then be able to share our experience with young people that had never been introduced to the scouting program and let them see that it’s a worthwhile endeavor to do.”

On the other end of the spectrum, Turo now helps lead a large group of about 80 Scouts here in Coronado. “What’s unique here is how dedicated the boys are to the program,” he said. “They’re very driven and likewise, they take their academic achievements seriously here, too. …We produce more Eagle Scouts than any other troop I’ve heard of, and these kids are really dedicated, driven, and take the initiative.” Eagle Scout is the highest rank of scout in the program and takes a minimum of three years to achieve. Currently, Turo is working with six Scouts (including his son) who are in that process, and 15 additional scouts who are close to getting started on their Eagle Scout journey.

With scouting, Turo says it really becomes a battle of time as kid get older. “You’re competing with sports and other after school activities so you have to stay relevant. You’ve got to stay active and show these kids there’s a benefit to what they’re doing,” he explained. With that in mind, Turo is excited for Troop 801’s upcoming events and to continue supporting the scouts as they grow and succeed under the principles of being a boy scout. “We enjoy an immense amount of support from the community,” he added. “The Optimist and Rotary Club help support the troop financially and I want to give a shout out to my adult leaders and their support because we’re only as good as the support given to us and the Coronado community is always great.”

For any families looking to learn more and get involved with the Boy Scouts and Troop 801, visit their website at http://www.troop801coronado.org or reach out to Scoutmaster Steve Turo directly via email at stturo@gmail.com.