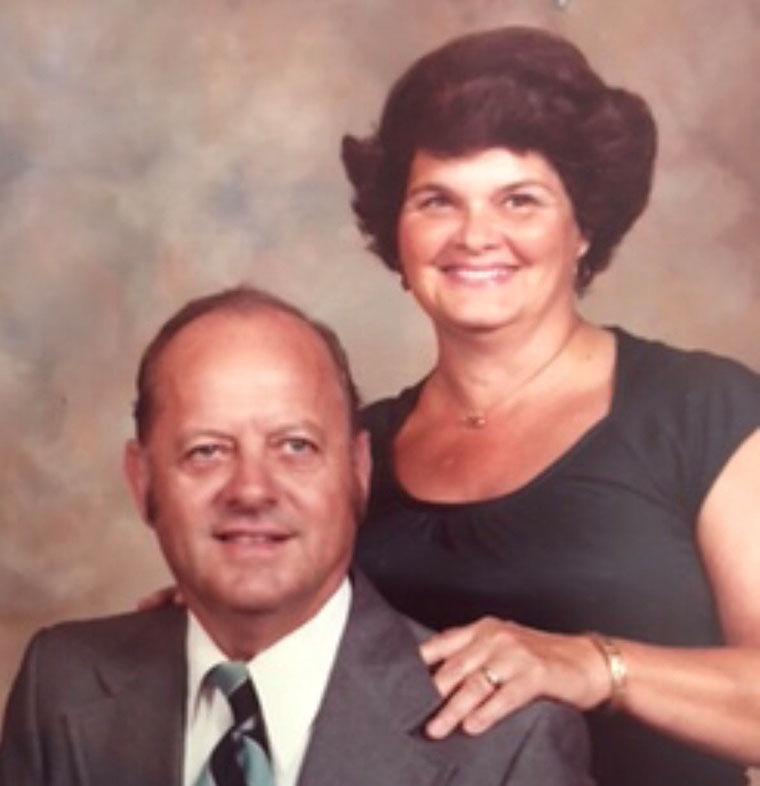 Elmer and Margaret Reynolds were married for 59 years before her passing two years ago. The couple met while they were both working at the Hotel Del Coronado and both worked for their Coronado Cab and Coronado Livery companies, which have been in the family for 46 years. 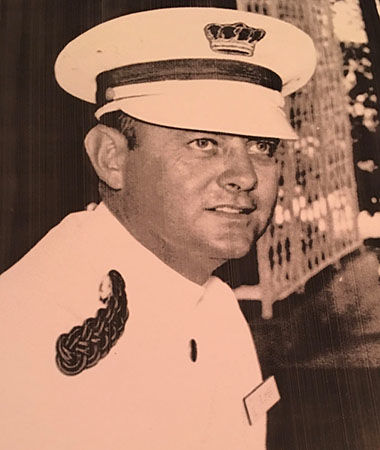 Elmer Reynolds worked as an employee of the Hotel Del Coronado for 15 years, rising to the position of Bell Captain. Reynolds, shown here in his uniform from the 1970’s later went on to own and operate the Coronado Cab and Coronado Livery companies.

Elmer and Margaret Reynolds were married for 59 years before her passing two years ago. The couple met while they were both working at the Hotel Del Coronado and both worked for their Coronado Cab and Coronado Livery companies, which have been in the family for 46 years.

Elmer Reynolds worked as an employee of the Hotel Del Coronado for 15 years, rising to the position of Bell Captain. Reynolds, shown here in his uniform from the 1970’s later went on to own and operate the Coronado Cab and Coronado Livery companies.

Our narrative begins with Family Patriarch Elmer Reynolds, still going strong at the age of 94, and who according to his daughter Carelyn Reynolds, was born in Kentucky, but considered Lucasville, Ohio his hometown. “Dad discovered Coronado during World War II and when he was discharged at the end of the war, he returned home for a while and then came back to Coronado in 1945. He worked for several hotels including the Bahia and he was the night auditor at the Hanalei Hotel. He kept busy and wherever there was work, he was there.”

Elmer’s hotel background eventually led him to the Hotel del Coronado, where he worked for 15 years, eventually becoming the Head Bellman at the Del. “Dad had an entrepreneurial spirit,” Carelyn explained. “He started Coronado Livery in 1969 and Coronado Cab in 1974. Coronado Livery is the airport delivery and shuttle business and Dad owns the oldest Transportation Charter Permit (TCP) in the State of California.”

As importantly, the Hotel del Coronado was where Elmer met his wife of 59 years, Margaret, who passed away two years ago. Margaret was also a Hotel Del employee and while Elmer worked the bell desk, they were in constant contact. Margaret was the internal driving force of the company that has been in the family for 46 years.

Technically Coronado Livery and Coronado Cab are two separate entities, which Carelyn described with a smile as, “Companies with similar ownership and management.” For the sake of this article, we’ll consider them one organization, which will hopefully lessen the confusion I grappled with, but Carelyn eventually solved during our interview.

“Dad saw a business opportunity and he started the Livery from scratch,” Carelyn said of the family business. “He saw the need for an airport shuttle service when the Bridge was going in. He saw the opportunity to shuttle passengers from the Airport to the Island. The company transitioned when Mom and Dad saw families come to the Del to spend the summer and then when the convention business started. Dad was close to Leonard Freeman, who was one of the owners of the Del. Dad was there to help the owners of the Del with whatever they wanted.”

You probably have in mind that Coronado Cab was a smallish operation, but during its height the company had a contingent of 25 cars. Carelyn, who is now the president of Coronado Cab, remembered the early days. “Our first office was in the lobby, then the offices were in the old stables where the garage was. We were where the Oxford Building sits now. The area was turned into a Jamaican village for an episode of the television show “Hart to Hart,” which was filmed there. Then they built a kiosk for us, at the front entrance under the Portico. From there we ran tours to the Zoo and to Sea World. We were super busy.”

One of Elmer’s highlights while working at the Hotel Del was the state dinner held Sept. 3, 1970, hosted by President Richard Nixon in honor of Mexico’s President Gustavo Diaz Ordaz. According to the Hotel Del’s website, “Among the 1,000 people in attendance were former President and Mrs. Lyndon Johnson, California Governor and Mrs. Ronald Reagan, Frank Sinatra, and John Wayne.” Carelyn’s recollections of the event included, “Dad was working his first state dinner, which was a big deal. He had to coordinate all of the parking that night.”

Carelyn was born in Coronado and graduated from Christian High School in El Cajon, before attending Point Loma Nazarene for two years and then graduating from Geneva College in Pennsylvania. Carelyn said, “I worked a little bit in the public schools in speech pathology, but mostly in the family business. Mom drove and also helped in the office and did dispatch. One day Dad needed an extra driver and Mom said ‘okay,’ so she also drove on occasion. I have a sister who is 15 years younger than me and her playpen was in the back end of a stretch limo. I took over the company and the gradual transition occurred probably in the mid-80’s. Dad’s first passion was driving, and he was happy to focus on that. Mom used to say Dad was like a turtle, as long as he was in his car, he was happy.”

April 1, 1996, tragedy hit the family when Carelyn’s brother Thomas Reynolds, 31, who was working as a dispatcher at the Yellow Cab headquarters was murdered during an attempted robbery. One of the men found guilty in the homicide case was identified as a part-time driver for Coronado Cab.

In 2018 and 2019, Coronado Cab survived a regulatory scare that began with the State of California requiring jurisdiction of cabs be relinquished by cities and turned over to other agencies. The cost of higher annual inspection fees and driver permit fees would have increased more than three and one-half times the previous level to $15,000. In addition, taxicabs couldn’t be more than 10 years old, meaning Reynolds would be required to replace 82 percent of her fleet within a one-year period.

Reynolds said of the regulatory challenge, “To avoid the change, cities could form a Joint Powers Agreement and Chula Vista elected not to. At the 11th hour, another law was passed that allowed Coronado to retain jurisdiction. They are our governing body. I was beyond appreciative to the city. Right now it’s tough for the whole industry in San Diego. The fees are too high in a post-Uber world.”

On a lighter side, Reynolds discussed some of her Coronado customers. “We had a client who lived in the Glorietta Bay Inn and nightly used to go to the early bird dinner at the Hotel Del. And we have some clients who we take to and from the hairdressers. We have a senior group who goes to the grocery store, to work, and doctors’ appointments, that sort of thing. I know a lot of the clients by name. We work a lot with Sharp Coronado Hospital. There are a lot of indigent people brought there and we get called when they are ready to be discharged. It’s a challenge for the hospital and for services like ours. Sometimes we are their only connection to the world. We understand there are a lot of folks on the front line for essential services, but they don’t always think about our industry. We want to be good servants of the community.”

Reynolds wished to acknowledge her office staff for their hard work over the years. Her staff includes Russ McElmury, Judy Benavidez, Davina Ortiz, and Jensen Briley.

As for her favorite part of her job, Reynolds said, “I would probably have to put driving, customer service and dispatching at the top. I’ve had to become political over the past 10 years to help the industry survive changes in the marketplace. I started an association with a few colleagues, to find better ways to serve the public and to interface with regulatory agencies. The Transportation Alliance Group has membership from the taxi industry, the charter industry, shuttles, off-airport parking and also some businesses which serve the transportation industry. The concept was really well-received, and regulators wanted to collaborate with us. At one point our members included the entire San Diego Cab industry. Collaborating with us is the Greater California Livery Association, one of the larger charter affiliates in the state. We represent probably half of the off-airport parking industry in San Diego and all of the shuttle industry. I was the president when it started in 2014 and now I’m a board member. One thing I really enjoyed was airport driver training. I got to know all the taxi drivers at the airport, most of the shuttle drivers and the airport traffic officers. We had a mandate to form a training program and make it positive, so when we went out into the field, it was a lot better.”

During the age of Lyft and Uber, Coronado Cab and Coronado Livery still are hanging in there, although the COVID-19 Pandemic has had a dramatically negative impact on business. Reynolds still remembers the customer relations principles her father employed when the company was founded. “From my perception and in my words, he met the individual needs of every customer. He never said no, he found a way to meet their needs. Back in the day, he had wheelchair vans before they were required. He would take customers of the Hotel Del wherever they needed to go. Whatever was needed.”

When asked for her final thoughts, Reynolds discussed the gratitude her family has for the City of Coronado. “We have appreciated over the years being part of this community. The drivers I interface with really desire to be ambassadors for the city and they really value the customers they serve.”