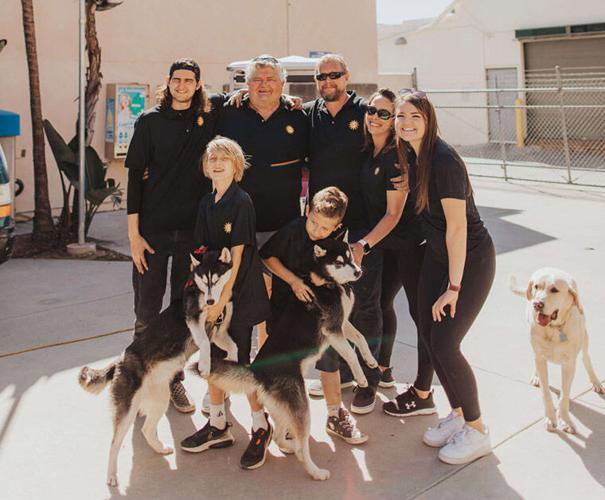 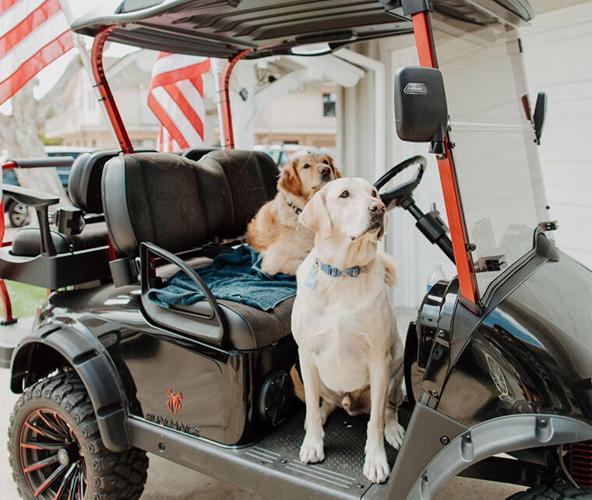 Coronado resident Mike Matheny has always considered himself entrepreneurial. Mike grew up on a golf course as one of ten siblings in his family, of which he was number nine. His father passed away when he was just nine years old, and he told me, “With ten kids there was not much to go around.” At the age of 12 he was determined to buy himself a bike, so every day after school he would go out to the golf course, find lost and water-locked golf balls, fish them out and sell them back to the golfers. “I wanted a bike, and doing that every day I raised 78 dollars and was able to buy myself my first bike,” he said. “…and that was the beginning of my entrepreneurship, at 12 years old.”

This was also the beginning of his long career in the golf ball business, which would eventually lead him to his current business venture; golf carts. In 2010, while he was still in the used golf ball business, he found an old golf cart on the side of the road. “I purchased the golf cart, and I brought it back to my shop and cleaned it up,” Mike explained. “Then I sold it three days later and made a profit on it… and it snowballed from there,” he laughed. Mike continued to purchase old golf carts, tear them apart, and build them back up all by hand. Mike would take these carts and make them faster, more efficient, and street legal. As he got deeper into the golf cart repair business he found some clients here in Coronado. “I started looking around to see how many golf carts there were in Coronado, and there wasn’t a whole lot,” he said. “So my daughter and I would come down here at noon on Fridays and drive around the island, we would have golf cart repair flyers and put one in every golf cart we saw.”

This was 2010, when golf carts were a lot less popular, so business was slow at the start. Mike explained that he was “broke” at the time when decided to move to Coronado. He found an office space for rent on Isabella Avenue, and he moved in. He made the small office into a livable apartment space where he would reside for the next three and a half years. Mike still has the office space but now it is used as his Coronado Golf Cart Rentals headquarters. “I moved in there and I had one golf cart that was my personal golf cart, I had really only one employee and myself buying golf carts and turning the wrenches on them and lifting them up,” Mike said. Mike is completely self-taught, “It was a lot of YouTube,” he laughed.

Before long, his business grew from just golf cart repair services to making custom golf carts and eventually golf cart rentals as well. Mike now has over 21 employees, three locations, and two golf cart businesses; Sundance Custom Golf Carts and Coronado Golf Cart Rentals. Through Sundance Golf Carts he takes old golf carts and repurposes them, “There’s I don’t know how many hundreds of golf courses in California, where do all of those old carts go from all of those courses?” he said. “Well they are getting repurposed somehow, and this is the perfect avenue for them to be repurposed… utilizing them in small communities [like Coronado].” Mike has a license to remanufacture these golf carts as “Low Speed Vehicles” or LSV’s, otherwise known as neighborhood electric vehicles. “We take carts that have been on the course for three, four years and take it down to the frame and make it pretty,” he said. Something new that Sundance is offering is a “bespoke” golf cart option, where people can get their custom golf cart made to perfectly match their car. “So if you’ve got a nice McLaren, Lamborghini, corvette… whatever those colors are, we’re going to make a golf cart that looks just like it.”

Both Sundance and Coronado Golf Cart Rentals are true family businesses. Mikes eldest daughter worked with him for years before moving out of state. His son, Luke, had his own radio instillation business, but during an unexpected boom in the golf cart business Mike asked his son to come help him out just for a month or two, to stay on track with orders. That was in 2014, and his son is still working alongside him to this day. “He said ‘Dad I really love what you’re doing and I really want to be a part of this business,’” Mike explained. Luke spent an entire year learning every thing he possibly could about the inner workings of golf carts before he started helping with sales. “Over the years he took it over, and then we hired an office manager, Kelly,” he said. “So Kelly comes in, and it turns out… they fall in love,” he laughed. “They teamed up and they are now engaged and creating a family, so now we have my future daughter-in-law managing the office and my son running it… and my youngest daughter (Maisie) has also been working with me since she was 14 years old getting to know the business.”

When Mike started Coronado Golf Cart Rentals, he had one single golf cart available. “People would call me up and say they wanted to rent a golf cart, and if that one was out, sorry we’re sold out,” Mike laughed. Now his rental business is constantly expanding and he is hoping to open up a second Coronado location somewhere on Orange Avenue where there will be plenty of foot traffic. Mike is also hoping to partner with some local hotels to provide hotel guests the option to rent a golf cart for their stay at a discounted price.

With the state of California taking steps to go electric with zero-emission vehicles, the golf cart industry is growing exponentially. Mike takes pride in his businesses, and every aspect of what his company does started with him doing it all by hand. “I know how long it takes to do the job… and we stand behind our product,” he said. “We bend over backwards to please every single customer, especially in Coronado.”

Mike loves being able to serve our beautiful community, and build life long relationships with his customers. “We’ve given two golf carts to the school district… we’ve donated to the Fourth of July Foundation, sponsored the Leap Frogs, worked with Make-a-Wish… we love giving back to the community,” Mike said. In December Mike will host a third annual Holiday Golf Cart Parade, where members of the Coronado golf cart community can decorate their carts and ride around town to look at the lights. “I really do love Coronado, I just want to thank Coronado for supporting Sundance and my rental business… I really enjoy living here and I wouldn’t want to be anywhere else.”