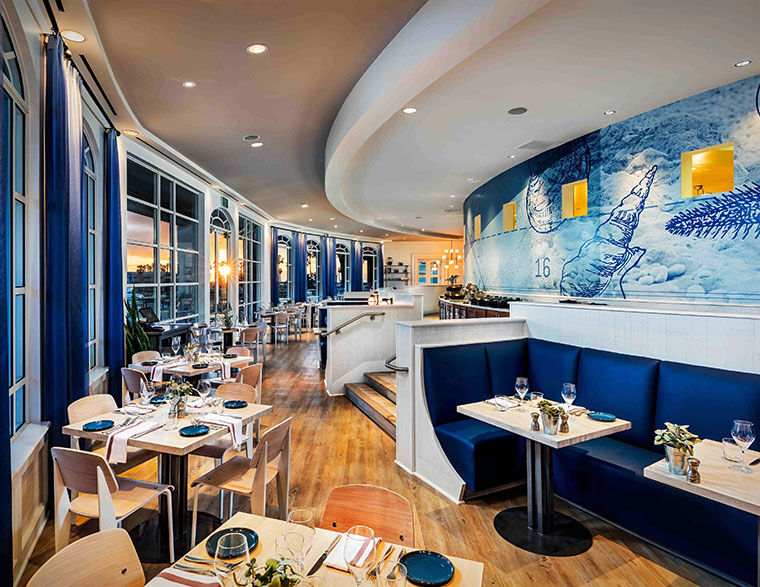 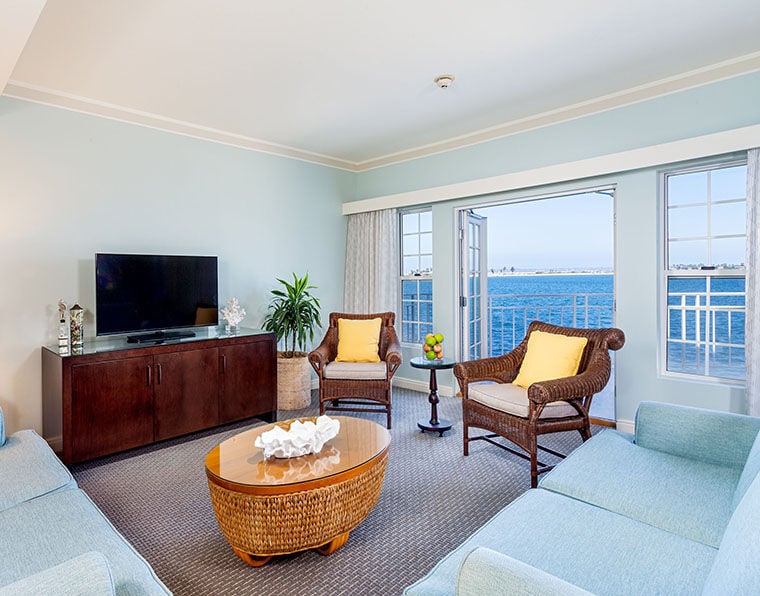 There are two things you need to know about Loews Coronado Bay Resort’s Managing Director Tony Phillips. First, he has been in the hospitality industry since he was 14. Second, being Managing Director of the Loews in Coronado has long been his dream job. Phillips said, “My wife and my boss knew if there was a possibility, I wanted to run this ship. It took several years and a pandemic for that to happen.”

As for his hospitality background Phillips said, “I jumped right into this field actually in Durango, Colorado. My cousin was the kitchen manager of a little diner, and I was working washing dishes and ultimately cooking on the line when I was 14 years of age.” To be legal, let’s say he was 16, and had the appropriate student work permits, but the statute of limitations has long since passed.

Phillips graduated from the University of Denver with a BS in Business Administration, specializing in Hospitality Management. He described how he began his career with Loews Hotels, a chain that now includes 26 hotels and resorts in North America. “My first job out of college, I was still in Denver, and I was the front office manager of a 600 room hotel located near Stapleton International Airport, that is no longer there. I actually had an associate who worked at the Loews Giorgio Hotel in Denver, who was just fired from his job. He called me and said I should apply for the position. So I called the general manager and said I knew my friend had been terminated and I was interested in the position. He hired me.”

Typically in the hotel business, working your way up in the company is accompanied by a series of job relocations. Phillips made stops in Santa Fe, New Mexico, at the Loews Beverly Hills Hotel, the Loews Santa Monica Beach Hotel, and the Loews Ventana Canyon Resort. But his favorite tour of duty was a 10-year stint at the Loews Vanderbilt Hotel Nashville where he rose from Director of Rooms to General Manager.

Phillips, said of Nashville, “Oh gosh, when I took that job my perception was ‘Hee Haw’ and hay bales. I didn’t know anything about the South as I was a West Coast person. I still consider Nashville partially home. I love it and I met my wife there, and my kids live there. I spend a lot of time there still and will probably land there again at some point. There is such great history in the city, including the Grand Ole Opry. They produce a show that is really amazing. As for the hotel, while I was the general manager, we completed a total renovation of the hotel and I learned a lot.”

For Phillips, his dream assignment of running the Loews Coronado Bay Resort began almost one month ahead of the arrival of the COVID-19 Pandemic. He discussed the closure of the Resort. “There were a lot of people and factors involved in determining the closure. We were like a lot of hotels and companies, there was no in-bound business. Airline and corporate travel was being cut and we were about sustaining rather than growing. We were at about a 10 percent occupancy rate and even a little lower in the days before we closed.”

The temporary closure of the hotel helped Phillips identify his property’s most significant attributes. “My answer may be different now that it was a few months ago, but the people here are our strength. I lived in the hotel when it was closed and clearly there are worse places to be stranded during a pandemic. But the hotel wasn’t the same without the people. I was excited to be able to open the doors again. Another strong point is our Food and Beverage operations and our Executive Chef Chris Aguirre. He is in charge of our catering, the banquets and our four restaurant locations.”

‘Welcoming You Like Family’ is a new Loews Corporate positioning concept, which Phillips expanded upon. “‘Welcoming You Like Family’ is more than just a marketing campaign. It also includes all of the safety protocols the hotels are participating in, including hand sanitizing stations and plexiglass shields. Honestly to me, the foundation I had growing up in Durango and welcoming people into your home, to me is also the foundation of service. In these uncertain times, people are frightened of travel and they expect to be welcomed like they are going into the home of their family or friends. We want to make sure people feel that. We have physical distancing markings in areas where there might be lines. We have plexiglass shields at the front desk and in front of the cashier at the bar. And we have a lot of signs. We have signage at every single elevator and in each public restroom, indicating that masks are very important in California.”

National Football League fans may recognize the name Jonathan Tisch, who is the Co-owner of the New York Giants. Tisch is also the Chairman and CEO of Loews Hotels & Company, he includes his company’s Coronado property among his favorites. Although he hasn’t visited Loews Coronado since Phillips was named managing director, Tisch is very hands-on with his company. “He goes to all the hotels frequently,” Phillips said. “His involvement in the company includes design. He personally selects the colors for the hotels, sits in every chair and handles every fork. As busy and important a man as he is, he still takes the time to be involved in hospitality.”

On the marketing end of things, the three Southern California Loews Hotels, located in Coronado, Hollywood and Santa Monica have combined to offer ‘Park, Play, Extend Your Stay.’ “One of the highlights of the offer is free parking at the properties,” Phillips noted. “We are seeing a lot of drive in business from Southern California, and there is a food and beverage credit. You can extend your stay because we are offering checkouts until 4 p.m. What we have learned is particularly on Sunday, people want to play a little bit longer. We are more than able to work with that. And we are putting 24 hours between the previous departure from a room and reassigning the room. We’re taking a lot of cues from the Center for Disease Control (CDC). We are working with a partner on water filtration. And there are a lot of things behind the scenes the guests don’t see that are important for our health.”

Figuring that during the hotel’s closure Phillips would glean some insights regarding his property, I asked him to list a few elements about Loews Coronado Bay Resort that the public doesn’t know about and should. “Well, two things come to mind quickly. One is the amount of outdoor spaces and gardens we have. We have our Grow Garden with all of our herbs, we have a Nectar Garden with our citrus, and my favorite is the Bliss Water Fountain. It has soft seating and it’s just a good place to be safe outside. There aren’t a lot of people and there are great views of the water. That’s a little-known secret. Another part of the property that is becoming more and more popular is our 81-slip marina. We do water sports rentals including kayaks, paddle boards, motorboats, and sailboats. We are finding people coming as a family unit, safely, to be on the water with beautiful weather. The marina has been extremely popular since we reopened.”

No discussion of a resort hotel would be complete without mentioning restaurants and Loews has four dining concepts to choose from. “We’ve become creative with some of the health restrictions that have come out,” Phillips said. “One which comes to mind is outdoor dining. We had to turn on a dime and we started serving breakfast poolside at La Cantina, with a great menu. We physically distance the tables and it’s a beautiful setting. Our dinner service is at the Cays Restaurant which overlooks the San Diego Bay and has limited outside seating for 60. That’s our main restaurant now. Before COVID, our Crown Landing Restaurant was the staple for us. We’re going to open the Crown Landing for breakfast next week. More locals know the Crown Landing and we want to make sure the Cays Neighborhood and the locals have a place to come to. And we have the Silver Strand Exchange, which is a grab and go market and café. We are packaging everything for carryout. A lot of our guests like to take meals to their room, or they can eat outside near the water.”

And if you’re looking for something to do for a change of pace, Phillips recommends a staycation at Loews Coronado Bay Resort. “We think it’s a great place to work from home, while staying at the resort. You can go to the beach or the pool, then jump on your laptop and do a video call if you have to. We’re seeing a lot of San Diegans coming over. You can get your work or schoolwork done near the beach. I’ve seen a lot of Zoom calls happening at the pool. Working remotely for a few days would seem like fun.”

Phillips likened the current need for Wi-Fi service and numerous power outlets to the importance of free shampoo in hotel rooms a couple of decades ago. Phillips laughed and said, “People might actually care less now about the shampoo than they do Wi-Fi.”

Going forward, Phillips sees the proverbial Loews Coronado Bay Resort glass as being half full. “We’ve had our occupancy rate climbing since Day 1 of our return. Now we’re getting to the 50 percent mark. I don’t like that 50 percent is the new benchmark for good. We’ll see that occupancy rate through August. There are differing opinions for after Labor Day. I think the summer will extend, with so many schools being remote and staycations popular. As long as the weather helps us out, I believe the season will continue on for a bit. Beyond that, it depends on gatherings being allowed and what the Governor says we can do.”