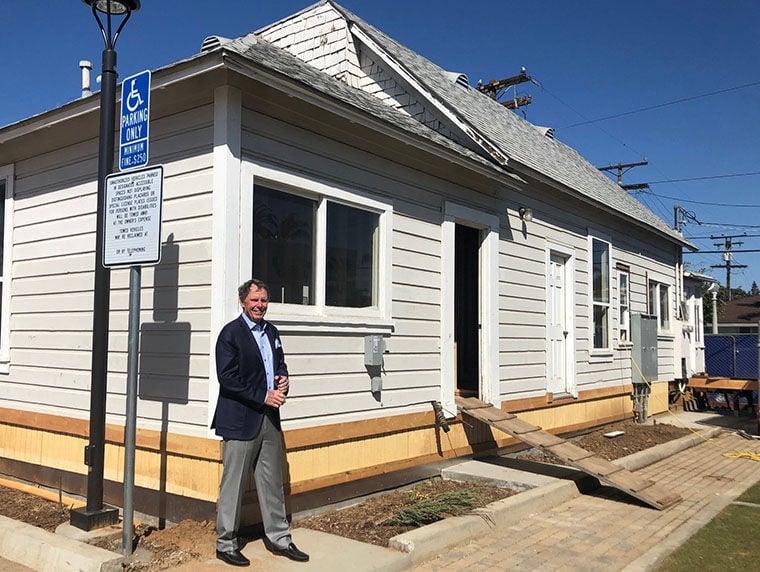 A side view of the house at 1116 Tenth Street. The former home of Eagle Newspapers is undergoing a remodel and will be the future site of the Willis Allen Real Estate office. Willis Allen President Andy Nelson was on the site recently. 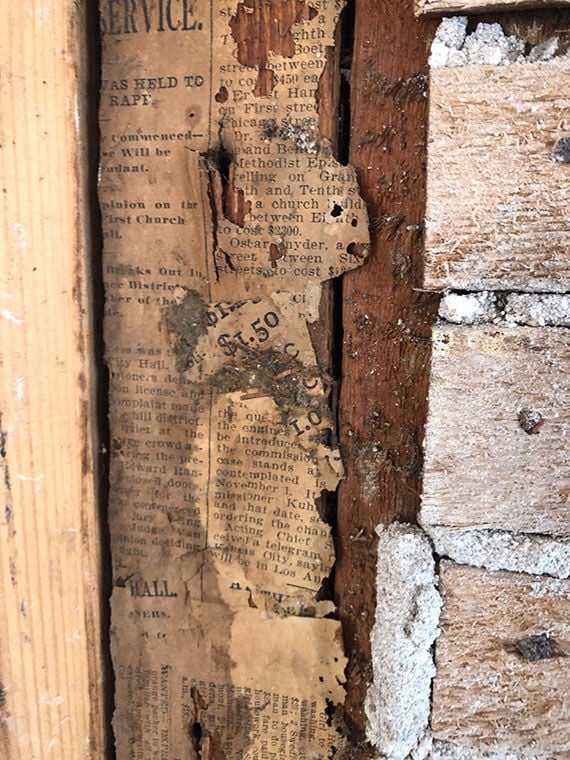 Old newspapers were used as insulation at the house at 1116 Tenth Street, the former home of Eagle Newspapers.

A side view of the house at 1116 Tenth Street. The former home of Eagle Newspapers is undergoing a remodel and will be the future site of the Willis Allen Real Estate office. Willis Allen President Andy Nelson was on the site recently.

Old newspapers were used as insulation at the house at 1116 Tenth Street, the former home of Eagle Newspapers.

Private home, home furnishing store, shoe repair store, newspaper office and soon to be realty office. For a house that’s been around for over 120 years the home at 1116 Tenth Street is like the cat with nine lives.

With the change of ownership of the entire block, which included the former Eagle house a few years ago, the home at 1116 Tenth Street was said to be in danger of being demolished. But fortunately the house will endure with a new identity, as a new Willis Allen Real Estate office. The home is currently being remodeled giving it a better chance to continue on.

A 1886 map shows the lot being drawn out by the Coronado Beach Company. The following year, William Hammer was listed as the first owner of the lot and he and his family lived in the house until 1909. The property originally included a twin house in the approximate location of the former El Cordova Garage, soon to be a restaurant called Buona Forchetta.

Through the year’s members of the Hammer family resided in the house until the year 1913. After that time various owners owned the property until the home was transformed into Aquarius Home Furnishings, then later Elf Valley Shoe Repair and starting in 1992 it became the home of Eagle Newspapers until 2018.

Nelson believes the house is a good fit for a new office and the smaller space is perfect for today’s business style. He pointed out that real estate agents these days mostly work remotely, so the small house would work well as a base of operations with a small staff.

Although the plan calls for keeping the exterior of the home the same, the interior will be modern. Nelson wants the Coronado office to have the same feel as the Willis Allen Banker’s Hills-Metro location with a contemporary interior.

Currently the house can be described as a skeleton and one can see from the front to the rear with no walls in between. “We wanted it to be an open space, then we’d put interior partitions, but in the process they discovered structural issues…and a lengthy permit process [took longer than expected] that’s why it has taken so long,” explained Nelson of the remodel.

The house will have five modestly sized offices for the premiere agents, an open area, a conference room, and a front office for the marketing director. An ADA restroom and ADA lift at the entrance are also planned. The interior of the building, once completed, will be designed by Rutledge Haro Design.

Nelson explained that the foundation of the house, which was brick and mortar, had to be rebuilt. The plans call for keeping the same entrance but making it wider and including an ADA lift. The front windows will also stay. Nelson wants to “maintain the integrity and historical look of the property.”

The original house was even smaller than what it looks like today. “It was a really small house and there are add ons and add ons,” said Christian Cardona, field operations manager for Dempsey Construction. During a tour of the house he showed areas where the new roof was added on. Among the interesting material used in the 1800s were newspapers that served as insulation. Pieces of newspaper on the wood beams can still be seen and read. One of them still on wall has want ads about orange packers, and girls wanted for washing and housework.

”We salvaged what we could and framed it. We found square nails,” explained Cardona. Nails were more expensive than lumber in those days. “Back in the wagon days, it was cheaper to burn down a house and rebuild a new one using the same nails,” said Cardona.

An 1890 newspaper was also discovered in the building.

The construction crew found no termite damage or decay because the house was built with redwood. Many of the original wood can be seen side by side with the new wood that has been recently installed. Cardona explained that although the house had a lot of structural issues, now with the new work being done, the house will last another 100 years. The house is said to be the second oldest house in Coronado.

Cardona pointed out the front room and said that it was probably a patio where someone would put a rocking chair and watch the world go by. The patio was later enclosed, probably in the 1940s, and these days you can see the remnants of old flowered wallpaper on one of the walls.

The old house will once again buzz with activity and take on a new life when the new Willis Allen Real Estate office will open in late spring.