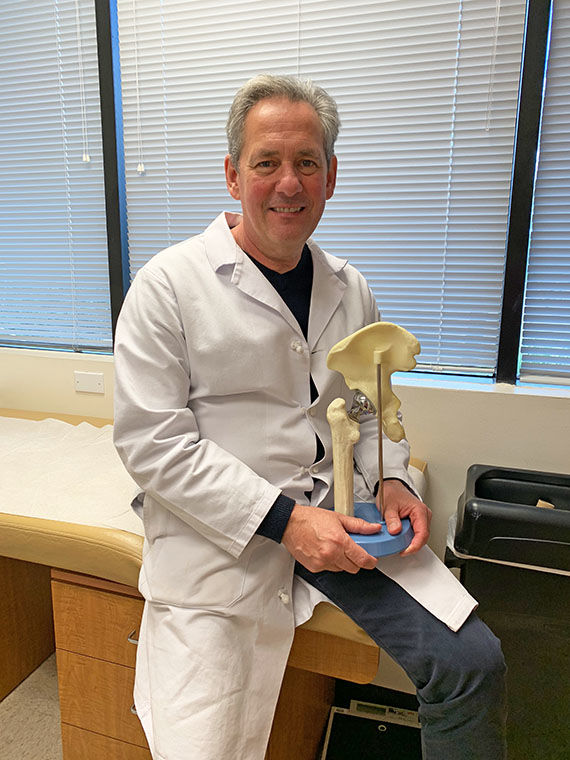 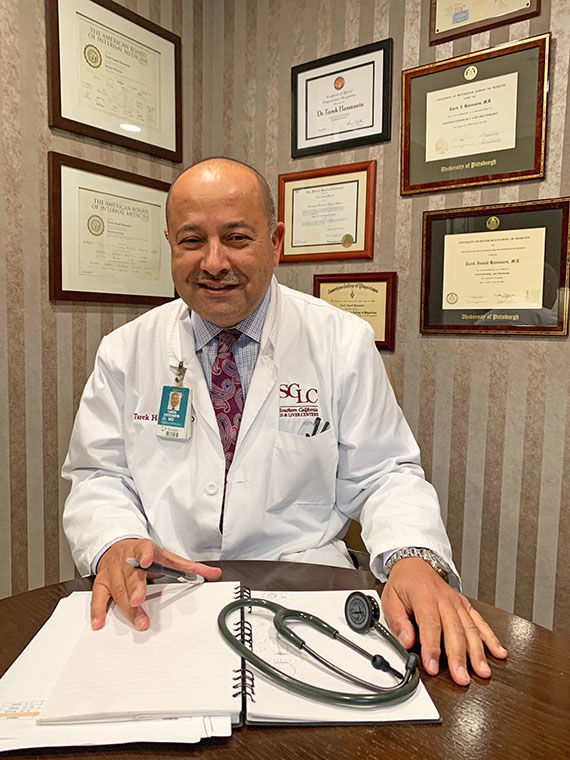 Each year, when Coronado Hospital Foundation holds its annual gala, the largest fundraising event of the year that supports Sharp Coronado Hospital, it honors a person or persons who have made an impact on the hospital and Coronado community.

This year’s “Under the Sea” gala to be held on Saturday, May 11 at Hotel del Coronado, will honor two Sharp-affiliated physicians: Doctors Joseph Jankiewicz and Tarek Hassanein.

Here are the stories of these two dedicated doctors, the roads that led them to Sharp Coronado Hospital, and the impact they have made on their profession.

Dr. Joe Jankiewicz is one of Southern California’s premier orthopedic surgeons, and a leading specialist in total joint replacement surgery.

He is also a product of Philadelphia’s hard-working middle class. His father was a shoemaker who never graduated high school and his mother worked at night as a waitress. You can still detect a trace of his Philly accent, and you sense that Jankiewicz is proud to have it wired in his DNA.

“My dad was my inspiration,” Jankiewicz said. “He really encouraged education for all of us kids. His best friend was an eye doctor who influenced him in this regard, and my dad really listened and carried that message home to all of us. He would tell us that one day your hands or legs might go, but your brain can never go. Today, my sister is a dentist and my brother has an MBA and works as an accountant for the federal government.”

But Jankiewicz’s father’s inspiration went far beyond driving home the need for education; it was his steady example of character in the face of adversity. “My dad had rheumatoid arthritis from an early age,” Jankiewicz said. “I think he had 40, maybe 50 surgeries, throughout his life. By age 35 he had had hip replacement and knee replacement surgeries.

“And each time he had an operation, it enabled him to continue to work and support his family. We thought of those surgeries as little miracles.”

Jankiewicz had first considered becoming an engineer, but an uncle dissuaded him from that pursuit, cautioning about a perceived tough job market for the field. So young Joe decided to pursue a medical degree, in no small part influenced by his father’s medical journey. “And when you think about it, what I do is related to engineering, helping a body to optimally function,” he observed.

Even his mother received the message about education, Jankiewicz said. “After she got all three of us kids launched, she returned to school and received a degree in nursing. She worked several years as a cardiac ICU nurse and then was my father’s nurse during the final years of his life.”

To pay for college, Jankiewicz turned to the Navy, receiving a scholarship that paid for his medical degree from Georgetown University. And it was the Navy that ultimately brought him to San Diego. “I had the choice of Naval hospitals in Bethesda, Norfolk, Oakland or San Diego and I wisely chose San Diego,” said Jankiewicz, who “paid back” the Navy with his internship and residency at Naval Medical Center San Diego (Balboa Hospital). Toward the end of his residency, he received a Fellowship to the Hospital for Special Surgery (part of Cornell University). With this specialized training, Jankiewicz returned to Balboa where he ran the medical center’s total joint replacement for three years. He then joined Sharp Rees-Stealy and has been practicing there, and at Sharp Memorial Hospital and Sharp Coronado Hospital since 1999, which has since been named a Center of Excellence for joint replacement surgery.

Jankiewicz lives in Coronado, where he and his wife Holly raised their children, now adults, and where he can often be spotted biking about town. And when he’s not working, Jankiewicz turns to another passion, cooking. “I think that influence came from my mom,” he said. “I love to cook; we’ve even got a pizza oven in the backyard.”

Recognizing the importance of the very presence of Sharp Coronado Hospital, the one and only hospital that has been providing life-saving care for the “island” community since 1937, the Jankiewiczes chaired the 2017 Coronado Hospital Foundation Gala.

He has received more than 100 “Guardian Angel” recognitions from grateful patients and their families in the Sharp Healthcare network.

Jankiewicz says he sometimes shakes his head at the blessing he has enjoyed throughout his life. “I live by the ocean, I’m blessed with a loving family, and I’m surrounded by great people.

“On top of that, I get to ‘work’ at Sharp Coronado’s new Payne Family Outpatient Pavilion.

“It’s like moving into a brand new house,” he said, with a twinkle in his eye. “Yeah, life is good!”

He is one of the world’s foremost authorities of liver disease, and Dr. Tarek Hassanein’s decision a decade ago to make Coronado, and by extension, Sharp Coronado Hospital, his headquarters, has catapulted the reputation of the city and the hospital as a destination for those afflicted with a myriad of liver-related diseases.

They call liver disease “the silent killer” because overt symptoms do not typically appear until the end stages of the disease.

But it doesn’t have to be that way, says Hassanein, who is pioneering a new model of care to promote early screening for liver disease.

Over the past three years, his SCLC office has been located off a quiet courtyard at 131 Orange Avenue, Suite 101. But once past the lobby, one discovers that the medical center is extensive, encompassing much of the building’s first floor, and also housing Southern California Research Center, where Hassanein serves as medical director. There, in-care patients often participate in clinical trials, staying for up to two weeks at a time.

Through the research center, Hassanein also conducts investigative studies. He consults with pharmaceutical companies, writing the protocols and working with the FDA to request approval of clinical trials or a device.

One device that Hassanein brought into the country was MARS, which, similar to kidney dialyses, provides cleansing of the liver. Hassanein met the inventor of the machine in Germany. At the time there wasn’t an option for those patients with acute liver failure. He worked with the FDA to bring the machine to UC San Diego Medical Center and to the first U.S. non-university hospital, Sharp Coronado.

It stands to reason that a doctor with an international reputation comes with medical training that encompasses the globe. Hassanein received his medical degree in internal medicine from Alexandria University in Alexandria, Egypt, in 1982, and then interned at the university. His residencies included Alexandria University, Internal Medicine, in 1987 and Wayne State University in Detroit, Michigan in 1992.

Chief among his reasons for choosing Coronado to be the hub of his practice was the presence of Sharp Coronado Hospital, which was well into its Project 20-20 program to remodel and enhance the hospital campus when Hassanein was searching for the right hospital to serve as his base. He was also impressed that Sharp Coronado Hospital was early adopter of the Planetree patient-centered model of care.

Hassanein’s affiliation with Sharp Coronado Hospital led the way for the hospital to be named a Center of Excellence for Hepatology (liver care).

Hassanein is also a Professor of Medicine at the University of California San Diego School of Medicine, where he was instrumental in establishing three major liver transplant programs.

He specializes in treating viral hepatitis, fatty liver disease and cirrhosis, and in caring for patients before and after liver transplantation.

“When people come to the university for care, they are typically at end stage in liver disease,” Hassanein said. “That’s because the liver is typically 80 percent gone before symptoms appear.”

Not only does SGLC care for patients with advanced and complicated liver diseases, the centers provide what the doctor calls “community tertiary care” where the model of care includes screenings for liver disease and connecting with, and educating, primary care physicians about liver care.

“We discovered most liver disease can be efficiently managed in the patient’s local community, where they are closer to a local community hospital and their own primary care physician,” Hassanein said. “Patients don’t need to wait in line to be seen by a university physician. Once they enter the university system, they have to establish parallel paths of care, such as a university-affiliated rheumatologist and cardiologist.”

Screening for liver disease is done through a simple blood test or elastography, a medical imaging device similar to ultrasound that maps the elastic properties of soft tissues. Hassanein has three of the machines at his clinics in San Diego County.

Hassanein is promoting the community tertiary model of care as a model throughout the United States.

While the actual liver transplants are performed at the university hospital, all of his patients’ pre- and post-surgery and long-term care, is handled in Coronado and at Sharp Coronado Hospital.

“We get patients from everywhere – San Francisco, Oregon, and, just last week, Oklahoma,” Hassanein said. “The good news is that when the patient has the experience of staying at Sharp Coronado Hospital, it immediately becomes their preferred hospital for admission – because of Planetree, and because the ER doctors and nursing staff having a better understanding of liver disease and its consequences.

“That’s because these doctors see liver patients every day, not just once a month.

“And it’s the greatest thing, a blessing, for the family members,” he added. “When their loved one is in trouble, they know where to go, where they know they will be cared for by a knowledgeable and caring team of doctors, nurses and medical staff.

“Sharp Coronado Hospital is the first example of concierge level of care that can be a model for hospitals in the United States,” Hassanein said. “It has already become the center for liver care throughout Southern California.”

Hassanein has performed 14 liver transplants at UC San Diego since the start of the year. Five of them were initiated in Coronado, coming through his SGLC program.

Hassanein has received numerous “Guardian Angel” recognitions from grateful patients, many of whom become like family members. “I was so reassured when I came to see Dr. Hassanein,” said a patient who was referred to Hassanein by her primary care physician. “He was so calm and said, ‘No problem, that’s curable.’

“You go from shock, learning that you have liver disease, to feeling reassured that you can benefit from treatment and confident going forward by making some diet and lifestyle changes.”

Tickets to the Coronado Hospital gala, to be held at Hotel del Coronado on May 11 are still available. This year’s event co-chairs are Phyllis Walker and Janice Lowenberg. Contact Sandy Gross at sandy.gross@sharp.com or call the Foundation office at 619-522-3766.