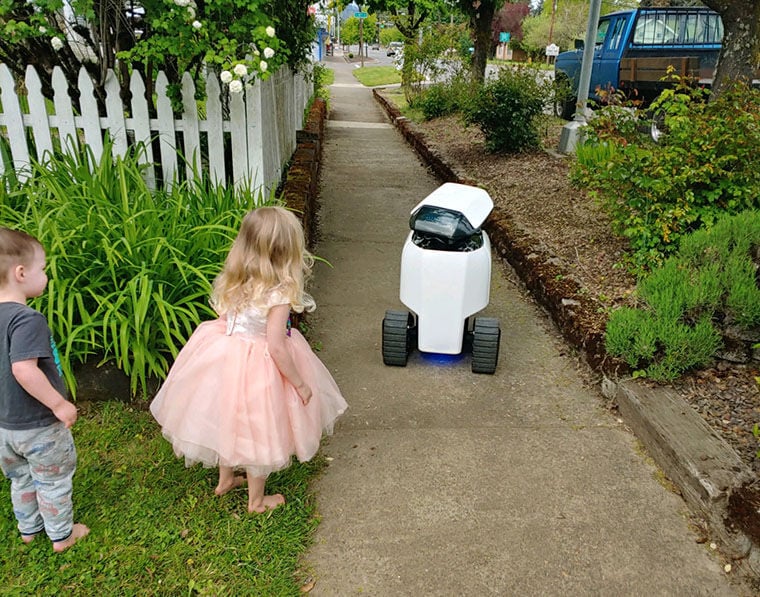 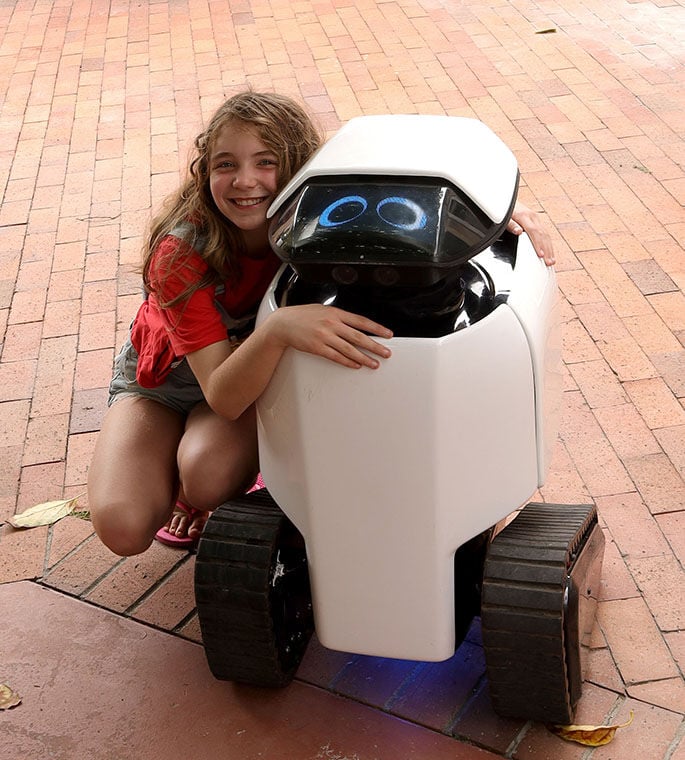 Three Daxbots are currently being readied for Coronado deliveries, two for the initial testing phase with one as a backup, and residents might spot them as they begin “mapping” Coronado over the next week or two.

Three Daxbots are currently being readied for Coronado deliveries, two for the initial testing phase with one as a backup, and residents might spot them as they begin “mapping” Coronado over the next week or two.

“When it comes to jobs there are the three D’s,” Burleson told me when as we spoke about their newest development and I asked how Dax came about. “Is it dirty? Is it dangerous? Is it dull? These are jobs that robots can excel at and open up more interesting jobs for people. …What school kid says, ‘I want to be a driver for Uber Eats?’ when they grow up?”

Irvine jumped in, “But, ‘I want to be a drone or robot safety operator’? Yeah.” This is where Dax comes in.

“For us, it has to be approachable,” continued Burleson. “[Daxbot’s approach] is that they want people to think of him like a dog.” Dax is three feet tall and about two feet wide. It has a head and a face with two pixelated eyes that can smile or turn into hearts, as well as a neck that helps to create organic communication. Anyone around Dax can see where Dax is looking and interpret his mannerisms and expressions, such as a head tilt, in the same way they would with other people or animals.

Burleson and Irvine also see the addition of Dax to Dine.Direct as helping to solve a problem for both restaurants and diners. In the restaurant industry Irvine says upwards of 30% of takeout orders never get picked up by customers, and that problems exist with third party delivery services (which take can a significant percentage of the cut on a restaurant’s delivery order) with instances of drivers either failing to pick up the food or never delivering it to the customers after pick-up. Dine.Direct was designed as a service to help restaurants keep orders and delivery in-house to negate these issues, especially as the pandemic made in-person dining an impossibility last year. Dax is another way they can give local restaurants opportunities and options that suit their needs to keep their revenue from takeout orders to go towards their employees and operation.

“Oh, the footprint is so small [with Dax],” Irvine agreed about the environmental benefits of using the electric-powered Dax over traditional modes of delivery via gas-powered vehicles. “For Dax to make a delivery, it uses about the same amount of power as a person blow-drying their hair,” Burleson added.

Three Daxbots are currently being readied for Coronado deliveries, two for the initial testing phase with one as a backup, and residents might spot them as they begin “mapping” Coronado over the next week or two. Dax is semi-autonomous and mapping will help the bots to essentially create a floorplan in their memory to help them recognize where they will be going to deliver food around the island. For Coronado restaurants that want to add Dax to their delivery options, Burleson says they just need to join the Dine.Direct platform and join the waitlist for Dax. According to Burleson and Irvine, “Daxbots will be scheduled on a first-come, first-served basis through Dine.Direct’s AI scheduling capabilities.”

For diners that would like to have Dax deliver their order, restaurants that opt in for Daxbots will have an option that customers can select when ordering takeout to request Dax. Similarly, these will run on a first-come, first-served basis for deliveries. There’s no extra fee associated with requesting Dax to deliver, and customers will receive a delivery time window (or request a specific time they want their food) and will be able to track Dax’s progress.

As the Daxbots enter their pilot deployment in Coronado in August, Dax will start by delivering food within about a mile radius of the restaurants they’re delivering from. They are equipped with insulated front storage and a “Pizza Pack” backpack that, together, can currently carry about the equivalent of six large pizzas, an order of a dozen wings, and drinks at one time. “[Dax] will go on the sidewalk right now and won’t go over three to four miles per hour,” Burleson noted of how Dax will get around. Eventually they’re looking at getting Dax in the bike lanes where it would travel at a pace of around ten miles per hour, but they will be constantly working with community to figure out what works best.

As a semi-autonomous robot, Dax is built with collision detection so Dax can avoid bumping into people or obstacles, but also has a remote operator that monitors the Daxbots and will be alerted in areas of high traffic or other circumstances that would require the operator’s assistance. In those instances, Burleson says, a human will be making those decisions that require a higher level of functioning. But, he added, “[Dax] understands, to the millisecond, if something crosses his path in front of him and can respond.” When Dax arrives at the order address, the customer will receive an alert on their phone that Dax is outside where they can retrieve their order from the storage container and/or Pizza Pack.

As for the robot safety operators, or “robot wranglers”, as Burleson and Irvine have nicknamed the title, they hope to get the community involved with these new jobs. “Kids that are interested in STEM at the high school that want to be robot programmers and things like, could get involved with maintaining the Daxbots,” Burleson said.

“Ralph suggested that maybe there could be an organization or class at the school,” Irvine added. “It all boils back down to the idea of community, and helping to build community. And not that it’s not happening already, but it’s another layer to help draw everybody, including kids, in and it’s fun; something new.”

Coronadans can keep an eye out for Dax in the coming weeks and begin to request Dax during the pilot program through orders in August. Currently two local restaurants will be involved during this phase; Clayton’s Bakery & Bistro and Mexican Takeout. Burleson and Irvine hope to be able to involve more restaurants in the community in the coming months and create a community hub, adding to the crew of Daxbots to meet Coronado restaurant’s and resident’s needs.

To learn more about the Dine.Direct platform and team, you can visit their website at https://more.dine.direct/.