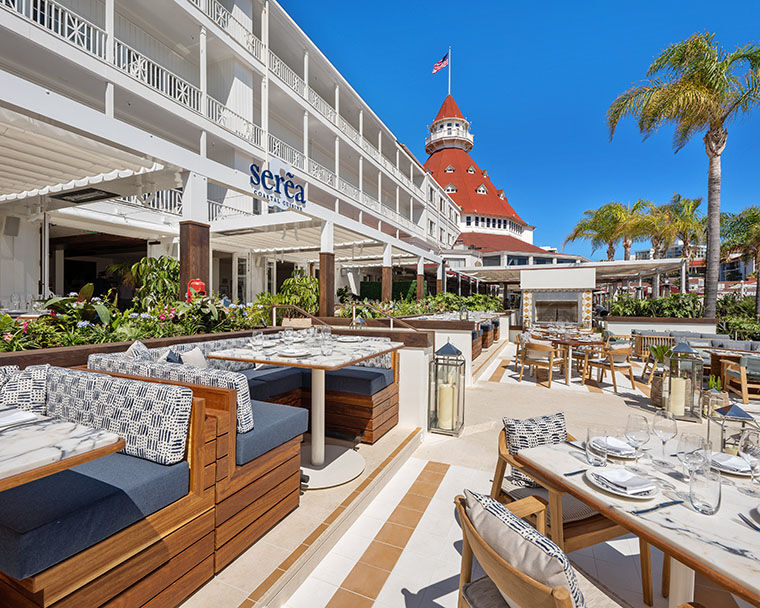 With the State of California’s current COVID-19 protocols emphasizing outdoor dining, Clique Hospitality’s Serea Restaurant at the Hotel del Coronado is perfectly positioned for dining accessibility. The sea-to-table restaurant has seating capacity on their outdoor terrace, and guest dining is also available on the lawn in front of the restaurant, all with scenic views of the Pacific Ocean. 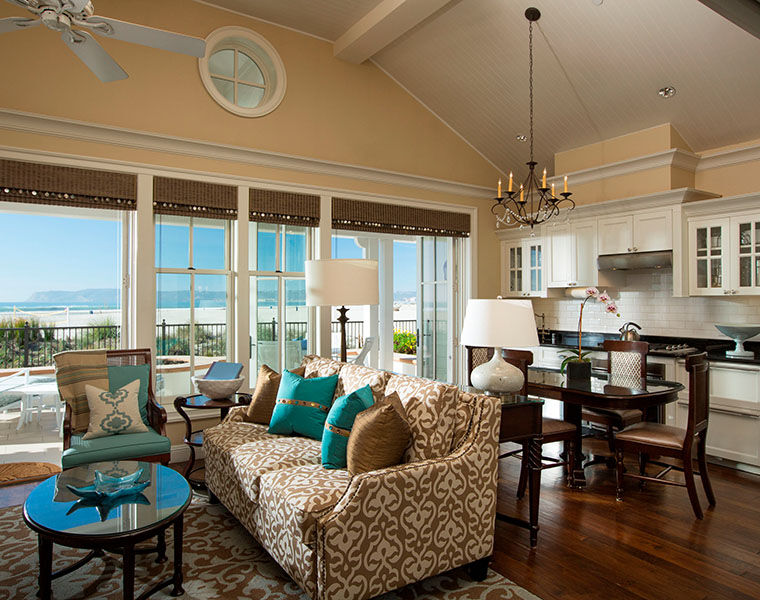 This is a view from the interior of one of the Hotel del Coronado’s Beach Village Cottages. Looming large in the background is the Pacific Ocean and a clear view of Point Loma.

With the State of California’s current COVID-19 protocols emphasizing outdoor dining, Clique Hospitality’s Serea Restaurant at the Hotel del Coronado is perfectly positioned for dining accessibility. The sea-to-table restaurant has seating capacity on their outdoor terrace, and guest dining is also available on the lawn in front of the restaurant, all with scenic views of the Pacific Ocean.

This is a view from the interior of one of the Hotel del Coronado’s Beach Village Cottages. Looming large in the background is the Pacific Ocean and a clear view of Point Loma.

After being totally closed to the public for 90 days, the 132-year old Hotel del Coronado is rapidly re-opening for business. “I’m just happy we’re open,” said Hotel Del General Manager Harold Rapoza, Jr. over the weekend. “Our last day of operation was March 26, 2020, and we re-opened the Beach Village at the Del and 190 rooms in the Victorian Building June 26, 2020. There was no revenue coming in prior to our closing. We have great owners and they wanted to make sure to protect this landmark and keep it in good condition when we re-opened.”

As for the decision to close the hotel for the first time, Rapoza explained, “It wasn’t a requirement of the state at that time. It was more about the business world internationally and in the U.S. We started feeling the business impact in early March when conventions started to cancel and our leisure travel business decreased to almost nothing. The week before we closed our occupancy rate was under 10 percent. Our owners and Hilton were watching other hotels suspend operations and the decision was made to make March 26 the last day. We were closed for 30 days and our system started accepting reservations 30 days after that. There was no demand and we extended our closing through June 25.”

Formally known as the Hotel del Coronado, Curio Collection by Hilton, the initial re-opening of the resort June 26 started with 190 rooms in the Hotel Del’s Victorian Building and another 78 rooms at the Beach Village at The Del. Between June 26 and July 11, an additional 110 rooms in the Victorian Building were placed into service. Roughly 10 days from now, another 97 Cabana Rooms and 33 rooms in the Victorian Building will come online for a temporary inventory of 508 rooms. In addition to the rooms noted here, three restaurant outlets including Serea Restaurant, the Beach + Taco Shack and On The Rocks, the Del’s upscale answer to a food truck, all opened at the end of June. All three eateries are again accessible to the public.

Rapoza added, “We’re starting to see demand pick up for the rest of the summer. We will continue to grow our occupancy rate, which we project through the summer to be 60 percent on the weekends and 30 percent during the week.”

What might be referred to as the COVID Closure and Reopening is just a portion of what is going on at the Hotel del Coronado. They are also in the midst of a $400 million planned construction, renovation, or restoration which will eventually impact the entire property. Although there were no guests present and therefore zero revenue coming in, there was a silver lining to the shutdown.

“It was a blessing in disguise,” Rapoza noted. “We were able to move forward with the renovation without the impact of guests. Ownership pushed some of the schedule up, including the fitness center, the spa, and the Ocean Tower guest rooms. The pool will open the week of July 19, and the Sun Deck Restaurant will be ready the first week of August. The focus while we were shutdown was to get the resort up, running and opened with amenities. We moved the spa up a little bit into mid-August, the Fitness Center will open in October and our retail shops will open in November. During the shutdown, we were able to move quickly through the summer projects. And the front porch, the front drive and the lobby project are tied together and are three months ahead of schedule. We just started the demolition of the front porch. It’s amazing what we are going through with the historic elements of what happened over the years. We are exposing beams and shingles from the 1888 (the year the Hotel del Coronado opened) time frame. The lobby is out of service right now until the first quarter of 2021. We’re operating from a temporary front desk we built in the Garden Patio.”

Sometimes it’s good to be lucky and good, as is the case with the Hotel Del’s sea-to-table restaurant Serea, under the direction of Executive Chef JoJo Ruiz. With the announcement of the state of California’s latest COVID-19 restrictions, outdoor dining capacity is paramount, and Serea is perfectly situated to handle that. “Eighty percent of the seats we have at Serea are on the terrace and the lawn,” Rapoza said. “We’ve added tables and chairs to the lawn and we are able to service people out there, which has worked really well for us. We are positioned so well with our restaurants because the Beach+Taco Shack has all outdoor seating. The Sun Deck, ENO Market & Pizzeria, and the Babcock and Story Bar are still on schedule to open in the first week of August.”

Rapoza estimated that during the three-month shutdown, he spent 80 percent of his time addressing construction-related issues. Now that the Hotel Del is in the process of reopening, his time breakdown is closer to 50 percent construction and 50 percent hotel-related matters.

“I think everything new we have done is better than we thought it would be from the designs and drawings,” Rapoza said. “The Power Plant came out just really, really nice. We restored it and it’s housing our facility department. We added a second floor in the building for a unique meeting space which customers will enjoy. Our museum will be finishing up by the end of the year, which is a great addition designed to display our history. We’ll start and end our tours there. You will be able to read about and see old pictures of the Hotel Del from the past 132 years. The Cabanas with day beds are a refreshing upgrade to the place. The ENO Marketplace, Pizzeria and Italian Marketplace will be more than a gourmet grab-and-go. It will be open 24 hours and people can buy picnic baskets, customize them, and take them out on the beach. The Babcock and Story Bar is a classic and we have brought back some of the original elements of it from the early 1900’s. The hotel’s main lobby is still in the design phase. We have stripped the wood down to the original and it will look amazing. We’re bringing back the historic feeling of The Del. The wood will be a little bit lighter. When they stripped the paint off, it looked like Golden Oak. That will be completed in the first quarter of next year.”

Rapoza realizes the importance of taking extraordinary health-related measures in these unusual times. “Obviously, our No. 1 priority is the safety of our team members and guests. We really wanted to build upon the already high standards we have with our housekeeping and hygiene. Hilton partnered with Lysol and the Mayo Clinic to create our protocols. From check-in to check-out, we want our customers to feel safe and clean. The most important highlight is our Hilton CleanStay Room Seal. Once our housekeeping staff goes into the room, cleans, and disinfects with Lysol including the television remote control, the light switches, doorknobs, and the mirrors, we seal the door so the customer knows that no one has accessed the room prior to the guest’s arrival. The lobby elevators and the public bathrooms are really important areas. We use hospital-grade disinfectant, and we have doubled the cleaning frequency of the most touched areas. We also have contactless check-in and check-out. With our Hilton Honors application and our Frequent Guest Program, you can download a digital room key to your phone. You don’t need to go to the front desk. We tell our team members people are scared and rightfully so. Their well-being is our top priority. Everybody on the staff has to attend an hour-and-a-half training on cleaning protocol, and they have to wear protective gear on-site.”

And if all of that wasn’t enough, new water line construction will continue this week as part of the Avenida del Sol Improvements, the area which will eventually become the beginning of the grand entranceway which leads to the Hotel del Coronado. And don’t forget new traffic signal construction, which according to Rapoza will start in 30 to 60 days, with a goal of being completed by year end.

As the renovation portion of the project is approaching completion, construction will begin on the new Conference Center. The Center will include a 15,000 square foot ballroom, with 10,000 square feet of meeting space. All of that meeting and event space will open onto a 14,000 square foot Great Lawn, with views of the Victorian building. The Hotel del Coronado has come a long way in the past year, but there is much, much more ahead.