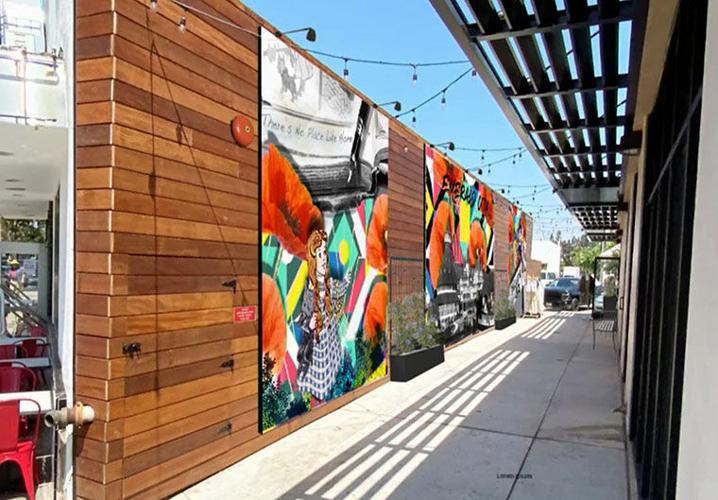 A look at the proposed murals and planters for the paseo walkway on the 1000 block of C and Orange Avenue. 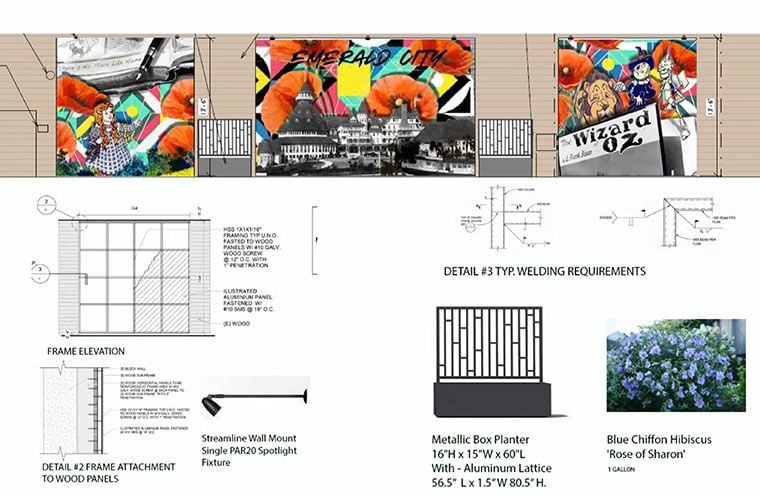 A blueprint for the mural images, lighting, and planters for the ‘Shops at Coronado’ paseo.

A look at the proposed murals and planters for the paseo walkway on the 1000 block of C and Orange Avenue.

A blueprint for the mural images, lighting, and planters for the ‘Shops at Coronado’ paseo.

At the December 14 Design Review Commission (DRC) meeting, the commissioners received an update on the property at 1000 C Avenue, which covers the block at Orange Avenue, Tenth Street, and C Avenue (also known as ‘the Shops at Coronado’).

The site, now owned by Kleege Enterprises, has previously come before the DRC in 2018 after El Cordova Garage became Buona Forchetta for parking lot improvements. In 2019 commissioners also approved a new paseo walkway on the block while City Council approved the parking plan for the current lot on the property. Changes to the property were later made without DRC approval and an application was then submitted and denied by the DRC and Council in 2021 with revision suggestions.

The property owner has now had two pre-design meetings to discuss the direction for those revisions, which were addressed in the proposal before the commissioners at the meeting.

Among the proposed improvements were a white wash of the transformer box conduit and wood on the corner of Buona Forchetta, including an addition of a side wing wooden fence and cap, as well as a planter, to block views of and beautify the transformer box, the addition of “The Shops at Coronado” signage and a wood cap to the wood screen on C Avenue, and the installation of three aluminum mural panels along the 70 foot wooden wall in the paseo walkway.

The three murals would encapsulate Coronado’s history with the Wizard of Oz, with two outer panels on the left and right of the wall that would measure 13.5 feet by 13.5 feet and depict the early designs of the primary Wizard of Oz characters and elements of the story. The central mural between each of the square murals would be a 13.5 feet tall by 21.5 feet wide piece with the same artistic design elements and highlighting a historic image of the Hotel del Coronado with the words, “Emerald City”.

The proposal includes further beautification improvement elements to the paseo walkway, including the addition of gooseneck lighting to highlight the murals, black, metallic planters with aluminum lattice with blue chiffon hibiscus between the murals, and a new bench across from the murals.

The art for the proposed murals was previously brought before the Coronado Cultural Arts Commission at the beginning of December where it received unanimous recommendation to the DRC for approval with the condition of the addition of a QR code for easy access by pedestrians to learn more about the mural artist.

Another proposed improvement is the addition of an ipe wood slat fence with a gate and black metallic trim to hide equipment in the opening between The Henry and C Avenue. The design would match the existing fencing structure behind The Henry.

Finally, a stucco parapet extension on the parking lot building façade to hide a pitched roof element and a black metal awning with slats above two of the storefronts on Orange Avenue were proposed. The awning was previously approved by the DRC, but now has added structural supports extending above the awning to the building, and would extend 22 feet along Orange Avenue, 95 feet along the paseo walkway, and 33.5 feet along the parking area.

After minimal discussion of the item, the Design Review Commissioners present at the meeting (James Kelly, Edry Goot, Dave Gillingham, and Nicole Lenhart) voted unanimously in favor of approving the proposal revisions.

For more information on the Design Review Committee and future meetings, please visit the City’s website at https://coronado.primegov.com/public/committees.

So it is ideal to tell the truth and forthright with your profile. Portray what you want and need in a relationship. Make sure to request what you need for however long it is socially suitable!. On the off chance that you need marriage and a family professional dating profile writer put that down in your profile.