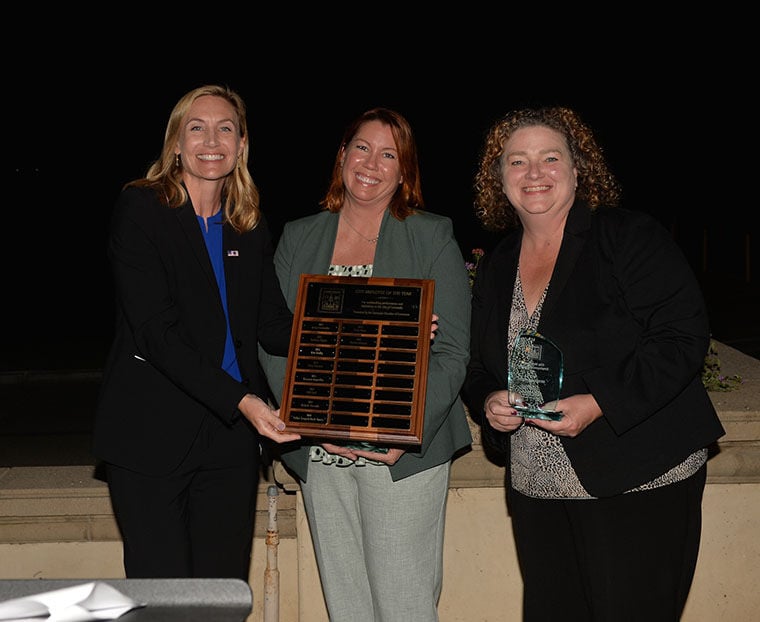 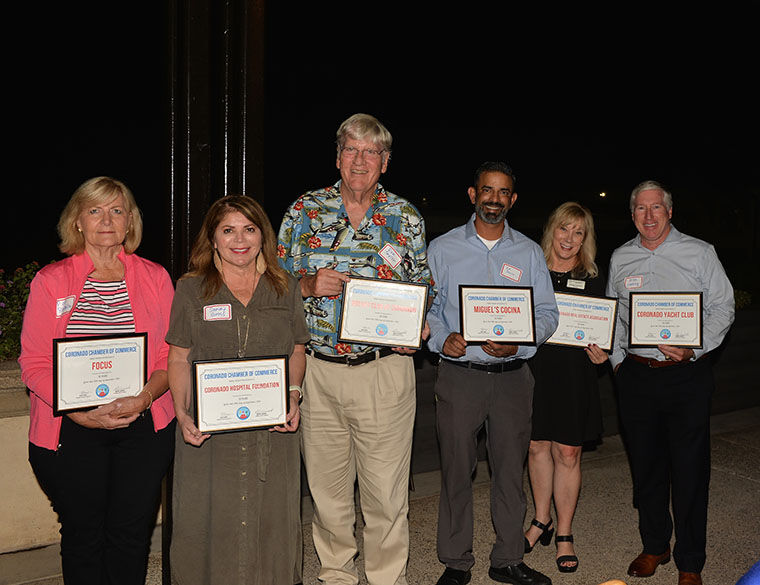 A number of local businesses and groups have celebrated milestone anniversaries in the past year and were recognized for their 30+ years in Coronado and with Chamber membership, including: Junior Woman’s Club, Holland’s Bicycles, Miguel’s Cocina, Coronado Real Estate Association, Napolitano Real Estate, the Coronado Yacht Club, Friends of Children United Society, and more.

A number of local businesses and groups have celebrated milestone anniversaries in the past year and were recognized for their 30+ years in Coronado and with Chamber membership, including: Junior Woman’s Club, Holland’s Bicycles, Miguel’s Cocina, Coronado Real Estate Association, Napolitano Real Estate, the Coronado Yacht Club, Friends of Children United Society, and more.

On Thursday Sept. 30, the Coronado Chamber of Commerce hosted their annual Celebrate Coronado Dinner and Awards Ceremony. The event was held at Feast and Fareway at the Coronado Golf Course where exemplary police officers, firefighters, lifeguards, and city staff were honored for their work and dedication. To make up for not being able to hold a recognition last year during the pandemic, awards were given for both 2019 and 2020 honorees this year.

The evening was joined by a number of community members, City Council members, local business owners, as well as past Chamber board members. On Nov. 4 the Chamber of Commerce will be celebrating its 84th anniversary as a part of Coronado. “Twenty-one Coronado visionaries gathered together to form this organization,” Michael “Mike” Woiwode said of the group’s beginnings in 1937. “This purpose was, and I quote, ‘To advocate, to advance, promote, improve, and protect the civic economic rights, privileges, and interests of the City of Coronado and the inhabitants, thereof.’”

Woiwode, who is the Chamber of Commerce Board Chair, hosted as master of ceremonies as the celebrations got under way and went on to mention how Coronado’s businesses help shape the quality of life for the city’s residents. A number of local businesses and groups have celebrated milestone anniversaries in the past year and were recognized for their 30+ years in Coronado and with Chamber membership, including: Junior Woman’s Club, Holland’s Bicycles, Miguel’s Cocina, Coronado Real Estate Association, Napolitano Real Estate, the Coronado Yacht Club, Friends of Children United Society, and more.

Following the business recognitions, Woiwode continued by introducing Rena Clancy as the Chamber’s new Executive Director following Sue Gillingham’s retirement. “We were fortunate Rena Clancy applied for the job,” he mentioned. “Rena has worked in small business, in hospitality, and she’s a very quick technical innovator. She worked with the Chamber for 18 months under Sue’s leadership, so she could see firsthand the roll the Chamber plays in helping our businesses through the pandemic. She came to the job with a plan…and I was struck by the statement she made, ‘All roads led me to this job. This is my community. I live, work, and play here.’ What a passion for the position,” Woiwode added before Clancy thanked the guests for being there to help celebrate the city and thanking Gillingham for her guidance.

“[Sue Gillingham] is the exact type of leader that I strive to be,” said Clancy. “Thank you so much, Sue, for everything that you’ve done for us.”

Gillingham was then invited up to be honored by the Chamber for her years of service to the community. “It was an honor to celebrate our businesses here in Coronado,” Gillingham addressed the group. “The fact that I wasn’t in charge of tonight made it even more special,” she joked before thanking the Chamber for the recognition. Gillingham was gifted with a framed photo signed by Chamber members and other guests, and a quote from Coretta Scott King that Clancy says perfectly describes her, “The greatness of a community is most accurately measured by the compassionate actions of its members.”

Gillingham then helped Woiwode present the Chamber’s esteemed Lewis R. Hardy Jr. Award to Cathy Brown. The award, named in honor of Lewis “Lew” Hardy Jr. who became a Coronado resident in 1943 and was a part of the island’s business community, Optimist Club, served as the Chamber of Commerce president for four years, and served on the Coronado City Council. “The Chamber honors Lew each year and an individual by recognizing someone who epitomizes his values. In particular, the Lewis R. Hardy [Jr.] Award is given to an individual who has made significant business and civic contributions, showing devotion to the overall quality of life in our community.” Woiwode went to list Brown’s contributions to Coronado, serving as Director of the Coronado Realtor Association for the past five years, a member of the Rady Children’s Hospital Auxiliary, organizing the annual Turkey Trot and the Concert in the Park events among them. “In my mind, Cathy is the exact model of a citizen dedicated to the wellbeing of the community,” he stated.

Police Chief Charles “Chuck” Kay was welcomed next to present the first of the community awards recognizing local city employees who have gone above and beyond. Kay honored Detective Jade Gutzmer as the 2020 Police Officer of the Year, citing her work on several high profile cases on top of taking on extra duties throughout the year while the department has faced staffing challenges. “Detective Gutzmer also took on a supervisor role by serving as an acting corporal in the investigation division, during the same time as she was on several high profile cases,” Kay stated. “Due diligence and hard work lead to the arrests on each of these cases.”

Kay went on to mention that Gutzmer has worked every position in the police department over her 15 years as an officer and is an active fire arms and defensive tactics instructor, as well. “Lastly, she stepped up during the height of the pandemic and made sure her coworkers continue to maintain a professional appearance by providing haircuts with no charge,” Kay added to laughs. “Detective Gutzmer works hard every day to bring value to our residents and honor her chosen profession. Thank you, Detective.”

Coronado Fire Chief Mike Blood followed to honor two firefighters with the 2019 and the 2020 Firefighter of the Year awards. Captain Ted Porter was named the 2019 Firefighter of the Year recipient for his work and high level of engagement with a variety of programs. “Examples of Ted’s involvement include that of a CERT instructor, a CPR instructor, he built storage areas around the fire station for protective equipment – that’s because he’s an excellent woodworker,” Blood listed, before adding more of Porter’s accomplishments such as taking the lead on a confined space equipment purchasing and training program, EMS program, behavioral health program, Spaghetti Dinner, assisting with COVID vaccinations, and more.

Blood then named Captain Brandon Ihde as the recipient of the 2020 Firefighter of the Year award, citing Ihde’s dedication to a wide range of projects over his career in the department as well. “Some of the programs and projects that Brandon has been involved in include our VHF radio program, CPR and CERT instructor, primary instructor for our new hire database, involvement and support of the Burn Institute,” Blood mentioned. Ihde has also been involved in the Spaghetti Dinner, Public Open House, and in the development of wide variety of new training materials and specs, and more. Ihde was unfortunately unable to be there to accept in-person and the award was accepted on his behalf by a fellow firefighter. “All of these people have that same can-do attitude,” Blood said. “Closing, I’d just like to say that we are blessed to have such members who are so invested and deserving of such an award.”

Lifeguard Captain Sean Carey presented next, honoring Preston Lujan as the 2019 Lifeguard of the Year, and Garison Covel as the 2020 Lifeguard of the Year. “It’s very rare that I come across people like the two young men we’re going to honor tonight,” Carey began. “[Preston] ran the Junior Lifeguards so he has about 10 years of experience training your kids in ocean safety, and what a good job he did. He was able to walk that fine line between being a friend and still being the boss,” Carey noted. “Never have I seen a lifeguard with more charisma than that young man.” Lujan was unable to attend and accept the award in-person as well, and Lujan’s parents accepted on his behalf.

“Garison goes above and beyond,” Carey began of the 2020 Lifeguard of the Year. “And what I mean by that is, he has raised the bar and pushed our lifeguards – your lifeguards – to a higher level. He has passion for this job.” Carey went to mention how Covel took the initiative to develop new task books and training guides for the entire squad and has worked with the Junior Lifeguard program over the last two years as well.

New City Manager, Tina Friend, then awarded the 2019 and 2020 City Employee of the Year awards. Tricia Olsen who is the Associate Planner of the Community Development department was named 2019 Employee of the Year. “[Olsen] was selected for her knowledge and expertise of our historic resources,” Friend mentioned of Olsen’s decade handling many of Coronado’s historical aspects for the city. Friend added that Olsen is incredibly personable and deeply invested in the content she handles. “Not only is she the steward of our historical resources and making sure people can go through those processes,” Friend added, “she helps to answer lots and lots of questions in what is, as you can imagine, an intricate process. She’s patient, and she’s there, and she’s making it happen.”

Denise Johnson was awarded the 2020 Employee of the Year award for her work as Senior Management Analyst in the Public Services and Engineering department. “What jumped out at me immediately was her passion,” Friend said of meeting Johnson. “She’s really forming the backbone of what we do in keeping Coronado such a beautiful city. …She’s been instrumental in streamlining our processes and updating them, making sure that we, as a city, are functioning and transparent, and increasing our productivity.” Friend went on to cite the many projects Johnson has had a hand in, as well as mention Johnson’s lifelong pursuit of leaving places better than where she found them, and finding efficient and productive ways of making those improvements. When Johnson spoke to Friend about the award, it was to add that, “This award is the reflection not of my own work, but of the entire team.”

Friend was then invited to speak as the new City Manager and share her first impressions. “Thank you so much for instilling your trust to me, it’s been fantastic,” Friend spoke of her first 11 days on the job to that point. She has been delighted to meet her team and those of the community she has met so far, and is excited to build further relationships with the Chamber of Commerce and other groups around the city that contribute their resources and energy to the city and community. “I asked Rena,” Friend mentioned, “what she thinks the most important thing the Chamber does is, what are you most proud of? And she said, ‘I’ve got two things, but the main thing is we’re connectors.’ And I think that was perfect and exemplified what I think a chamber [of commerce] can do.”

A silent auction featuring donations from businesses around town concluded the evening as sponsors, awardees, and guests were all thanked a final time. To learn more about the Chamber of Commerce and upcoming community events, visit https://www.coronadochamber.com/.