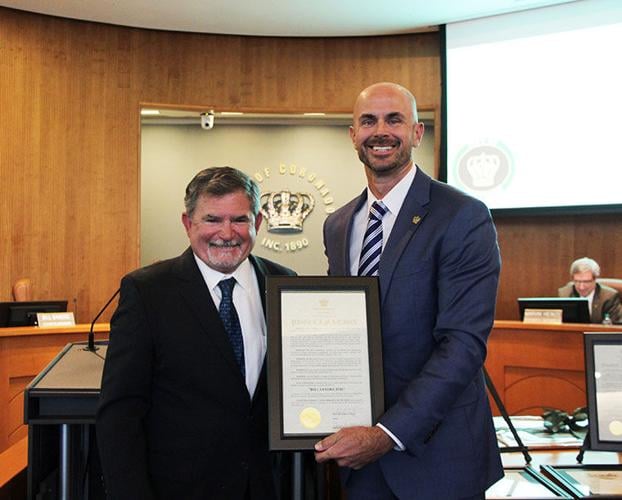 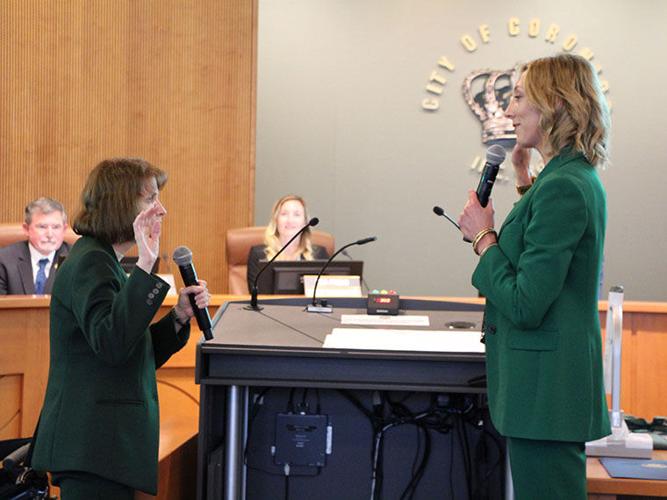 Carrie Downey is sworn in to the City Council by City Clerk Jennifer Ekblad. 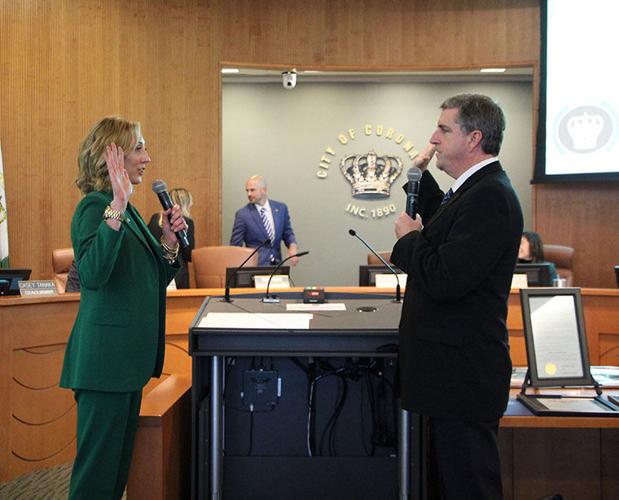 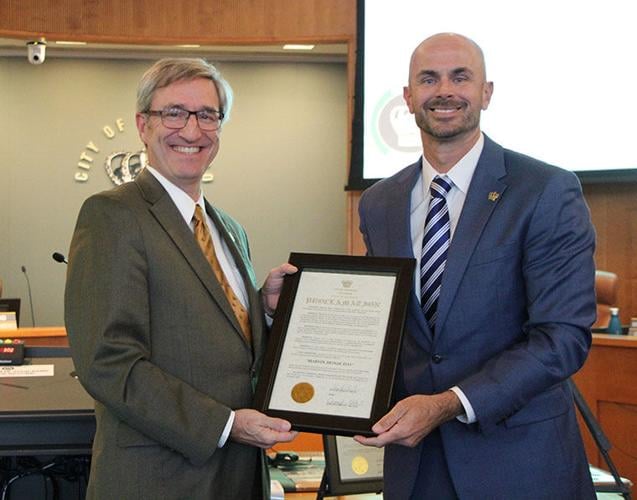 Carrie Downey is sworn in to the City Council by City Clerk Jennifer Ekblad.

The December 20 Coronado City Council meeting was the last meeting for the 2022 year and saw two new council members sworn in for the next council term. Councilmembers Bill Sandke’s and Marvin Heinze’s work on the Council was also celebrated as they passed the torch to Carrie Downy and John Duncan.

The meeting began with remarks from City Manager Tina Friend thanking both Sandke and Heinze for all that they’ve done for the City. Friend highlighted Heinze’s sense of service and the ways the City benefitted from his level-headed analysis of issues, fiscal stewardship, his perspective and his connections to the Navy, as well as his work on the League of California Cities and National League of Cities to help create solutions to issues such as the trans-border wastewater infrastructure.

Friend also recalled one of her initial meetings with Sandke. After having asked each council member to give her a tour of their Coronado, she found he had a story for every place in the City as they drove around town in a convertible. “The incredible richness of history and experience that you brought every day to the Council, having that deep knowledge and deep love for Coronado, always struck me,” she spoke to Sandke. “You always led on the dais with your heart first, in many ways.”

Friend noted how the work from both council members has helped make the City stronger and that they will be missed; a sentiment later echoed by Mayor Richard Bailey in his remarks as he presented both Heinze and Sandke with a key to the city and proclamations for December 20, 2022 as Bill Sandke Day and Marvin Heinze Day.

In his remarks, the mayor also made an announcement that the recently approved budget bill signed by President Biden included the $300 million to be transferred from the Environmental Protection Agency to the International Boundary and Water Commission to put into motion the plan to solve the sewage flow issues in Tijuana. “There are many items I could mention over the years of serving with Councilmember Heinze for the last four years, but given the timing of today’s announcement with those funds being transferred, I really wanted to commend [Heinze] for [his] years of service and advocacy for that,” he added. “We couldn’t have done it without you.”

In thanking Sandke for his contributions to moving many of the major projects currently in the works forward, Bailey commented, “We didn’t quite get them done yet, but we’ve made a lot of headway there and that headway would not have been possible without [Sandke’s] outstanding advocacy. As our city manager mentioned, as everyone here knows, he is a very personable guy and he was great at building relationships here in Coronado and also across the bridge. [He] really does lead with [his] heart and that’s going to be sorely missed here.”

California Assembly Member Tasha Boerner Horvath of the 77th District of California and Sharon Cooney, Chief Executive Officer of the San Diego Metropolitan Transit System (MTS) were also at the meeting to present the outgoing council members with accolades.

Boerner Horvath spoke of Heinze’s dedication to infrastructure and public safety, as well as his work on the Planning Commission and with the Navy. Heinze’s work, Boerner Horvath said, “highlights his selflessness and passion for improving not only the place he calls home, but also for setting examples for others who follow in his footsteps.” Heinze was presented with a certificate of recognition on behalf of the Assembly for his service.

Boerner Horvath then spoke of her time working with Sandke. “Since his first days in Public Office, Councilmember Sandke has been committed to serving the residents of Coronado in meeting their needs every step of the way,” she said. Boerner Horvath described how Sandke has worked tirelessly to find solutions on issues impacting everyday lives of residents, such as traffic and sea level rise, adding, “You’re going to be missed here at the City and your impact for Coronado’s quality of life will be felt over years to come.”

She commended his work on the Planning Commission, MTS Board, Transportation Committee, and other organizations before presenting Sandke with a resolution on behalf of the Assembly recognizing his leadership as a member of the Coronado City Council. Cooney of MTS also commended Sandke for his dedication, leadership, and attention detail with MTS as a board member, advocating for Coronado transportation options such as the ferry and making programs like the free summer shuttle in Coronado a permanent fixture.

Coronado Cays Homeowners Association (CCHOA) president, Mark Crisson, also took the opportunity to thank Heinze for his service and being a liaison for the Council and the CCHOA and the Grand Caribe Task Force, providing advice and insight in his roles.

Base Commanding Officer, Captain McKissick similarly thanked both council members, noting their support of the naval base and helping make Coronado a welcoming place with a strong foundation for the Navy fleet and families.

Both Heinze and Sandke were grateful to the community, City staff, and the Council for their support during their time as city council members, and left the Council with hopes that they would continue to persevere in important ongoing projects; especially relinquishment, water recycling, and underground infrastructure. They encouraged the incoming council members to continue to build the relationships within and beyond the City that will help them lead and continue to improve Coronado.

Following these presentations and remarks, John Duncan and Carrie Downey were sworn in as the two new council members and board, committee, and other assignment appointments were made for the new city council term.

With that the final council meeting of 2022 was adjourned. The next meeting is set to take place on January 3 of the new year at 4 p.m. at City Hall. For more information, please visit the City’s website at https://www.coronado.ca.us/449/Agendas-Minutes.