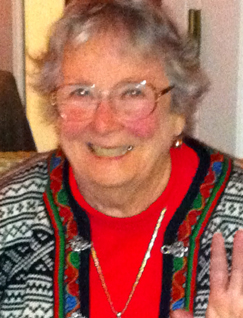 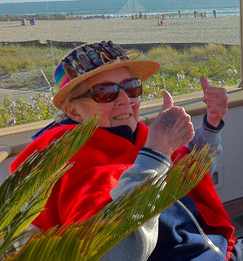 Nancy Welch, a Navy widow, mother of two sons, grandmother of four, retired Marriage, Family, and Child Counselor and Therapist, and, 46-year Coronado resident and active community member, passed away peacefully on December 11, 2013, at Sharp Hospital in Coronado. She was 82.

Nancy was born June 9, 1931 in Upper Darby, Pennsylvania, the second daughter and third child of Alec and Annie Rodger. Nancy was the only child in her family not born in Scotland, and all her life she was fiercely proud of her Scottish heritage and her MacDonald and Fraser highland clan legacies.

It was while on a layover in Oklahoma in 1953 that she met the love of her life, Lieutenant Junior Grade Clyde Ray Welch, USN. Clyde Ray was a native Texan from Somerville Texas and a 1951 graduate of the United States Naval Academy and a fighter pilot for the US Navy. Legend has it that Nancy was wearing white pants and sat in some red wine, and Clyde Ray followed her around all evening offering to help her clean it up. They were married on October 31, 1954.

Nancy played the role of Navy wife with gusto, following Clyde Ray from one Naval Air Station (NAS) to the next, and keeping the home fires burning during his frequent and long aircraft carrier deployments. Their first son, Rodger Laing Welch, was born on August 14, 1956 while Clyde Ray was stationed at NAS Alameda in Oakland, California, and their second son, Scott David Welch, was born on October 7, 1960 while Clyde Ray was stationed at NAS Miramar in San Diego, California.

The family was stationed at NAS Lemoore near Fresno, California when now Commander Clyde Ray Welch was the Executive Officer of Attack Squadron VA-164, deployed aboard the USS Oriskany in the early stages of the Viet Nam war. On October 26, 1966, while cruising in the Gulf of Tonkin off the coast of Haiphong Harbor, North Viet Nam, a fire broke out aboard the ship and Clyde Ray and 43 shipmates were killed. He was brought home and buried with honors at Arlington National Cemetery.

Following a brief stay with immediate family in the Philadelphia area, Nancy brought her two young sons to Coronado in 1967, and she remained a proud resident for the rest of her life. Putting herself through school as a single mother raising two teenaged boys, Nancy earned her undergraduate degree in Psychology in 1978 and her Master’s degree in Marriage, Family, and Child Counseling in 1981 from Cal-Western University. Her outstanding academic performance earned her a membership in the Psi Chi National Honor Society (Psychology).

Nancy embarked on a successful and productive career as a Marriage Family, &, Child Counselor and Therapist, working primarily for the US Navy at NAS Miramar. Over the course of her career, she was selected by the Navy to inaugurate its worldwide Pilot Program aimed at assisting returning sailors, aviators, and their families to adjust and transition following long separations during fleet deployments. This included Nancy joining the USS Nimitz battle group in Singapore in 1992 as it returned from cruise, and helicoptering from ship to ship to counsel and engage with the returning troops.

She was the Deputy Director of the Navy Family Service Center at NAS Miramar from 1981-1992 and then ended her career as that Center’s Director from 1992-1997. During her career, Nancy was a Clinical Member of the American Association of Marriage Family Therapists, a Fellow in the American Orthopsychiatric Association, and an Affiliate Emeritus of the California Society for Clinical Social Work. Her many professional accomplishments resulted in her listing in the World’s Who’s Who of Women, Who’s Who of American Women, Who’s Who in California, Who’s Who in Medicine and Health Care, Who’s Who in the West, and the International Who’s Who of Professional & Business Women.

Nancy was active outside of work, as well. She was a US Naval Academy Candidate Panelist from 1975-1990, she served on the San Diego County Welfare Advisory Board from 1985-1986, was Co-Chair of the Armed Services YMCA Advisory Board from 1981-1982, and Chair of the Military Community Task Team from 1989-1990. She was appointed by US Congressman Brian Bilbray and the San Diego Board of Supervisors to the Commission on Youth and Children, a position in which she served from 1986-1994. This was followed by a role as the Supervisor to the San Diego Commission on Children, Youth, and Families from 1995-1997.

Nancy kept herself as busy in retirement as she had while working. She was appointed by the Superior Court of San Diego to the San Diego County Grand Jury from 1998-1999, where she served as Chair of both the Citizen Complaints committee and the Study Issues committee. She served on the Citizens Advisory Board of the City of Coronado Re-Development Agency from 1999-2004, was the Program Manager of STEPS (Treatment Services for Trauma Reactive Children and Adolescents) and EYE (Escondido Youth Encounter) for the San Diego Department of Social Services from 2000-2003, and was a Docent at the Scripps Birch Aquarium in La Jolla from 1998-2004. She was a member of the City of Coronado Visitor’s Bureau Advisory Board from 2000-2003 and the City of Coronado Development Committee from 2008-2011.

Nancy was an active member of the Coronado Crown Garden Club from 1968 until her death, and her backyard garden was one of the true joys and pleasures of her life. She was also an active member of Christ Episcopal Church, the Tailhook Association, the Coronado Playhouse, the Hotel Del Coronado Heritage Spa (Charter member), and the Navy Yacht Club of San Diego.

Nancy loved to travel, and in her “retirement” she traveled all over the world on cruises and tours, soaking up local culture, buying indigenous arts and crafts, and making lifelong friends. But no matter where she traveled, she was always delighted to return home to Coronado and enjoy her backyard at sunset with her family and a glass of wine.

Nancy is survived by her two sons, Rodger (57) and Scott (53), and her four grandchildren: Rodger’s children David (27) and Laing (17), and Scott’s children Blair (17) and Matt (14). Rodger followed in his father’s footsteps, graduating from the Naval Academy in 1978 and enjoying a successful 30-year career as a Navy fighter pilot before retiring as a Captain in Hawaii. Scott pursued a business career and lives with his wife Kelly and their children outside of Washington, DC.

Nancy Welch will be missed by her family and friends, but she lived a full and adventurous life and is now reunited with the only man she ever loved. A memorial service will be held for her at Christ Episcopal Church in Coronado at 10 a.m. on 11 January, and she will be buried next to her husband at Arlington National Cemetery later the same month.